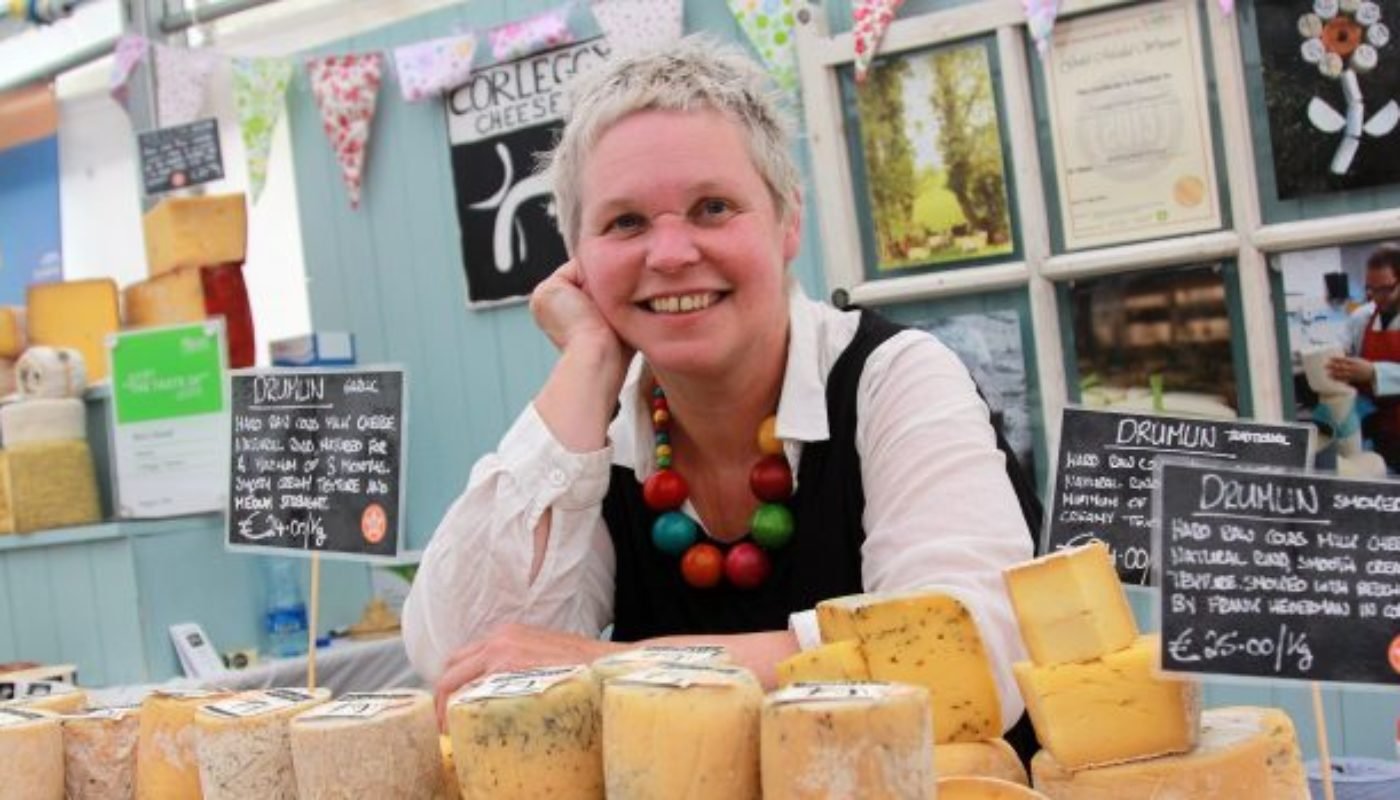 Home » The Cream of the Cropp – Corleggy Cheese Producer Spotlight

The Cream of the Cropp – Corleggy Cheese Producer Spotlight

Armed with little more than a cheesemaking book and ambitious trial and error approach, Silke Cropp couldn’t have imagined 30 years ago that her handmade raw milk goats cheese would become the star product it is today. “That was just the way it went, I had a goat that gave too much milk and started playing around with different recipes in the kitchen 32 years ago”, says Silke of her humble beginnings as an artisan cheesemaker in Belturbet, Co Cavan.

While Corleggy was born as an economical means of using a by-product, three decades later it has transformed into a thriving business which is the pride of the entire Cropp Clan. “Corleggy is and has always been a very small business run from our little Dairy at Corleggy Farmhouse,” explains Silke’s son Tom. As a family business spanning the generations, Tom says at Corleggy “everybody does everything”, pitching in on various different aspects of the brand, with he himself getting involved in the marketing side of things in the last five years. “We are very lucky to work as a family” he says, “with an even newer generation around (grandchildren) we can always work around making time for family, even working at weekends.”

That isn’t to say that he doesn’t get his hands dirty, as “we believe in no boss” says Tom when faced with the question of whether Silke still runs the show, “but experience counts when trying to keep the standard and in making new innovative products”, perhaps a diplomatic way of conceding that Mother does indeed know best! The Cropp’s credit another Irish cheese-making family as the inspiration behind Corleggy:

Our Hero has always been Veronica Steel of Milleens cheese. Veronica started the revival of farmhouse cheesemaking in Ireland some 38 years ago and sadly passed away recently. Her son now makes this amazing cheese.

A landmark moment in the Corleggy story, the acquisition of Super Gold status for Corleggy Raw Goats Milk cheese at the World Cheese Awards 2016 was a defining moment for the family business, the highest honour awarded. I had to wonder what set Corleggy apart from the 4000 other entries from international cheesemakers. “We can only believe that it must be the taste and we are over the moon to receive this accolade”, said Tom of the massive achievement.

As the original Corleggy variety, the raw goat’s version has been perfected over the years but the finished product changes, naturally, throughout the seasons. The rich green Cavan pastures produce a unique variety of flora, herbs and grasses on which the goat’s feed, adding a “We are very keen on the seasonal change of the Raw milk and therefore the cheese. It all depends on the quality and free availability of food stuffs so of course the summer cheeses are always the most interesting flavours when the animals have an abundance of fresh grasses.”

Raw milk cheese can lay claim to many benefits in addition to it’s uniquely delicious flavour notes. We hear so much nowadays about maintaining gut health with probiotics, by ingesting various fermented goodies. Let us not forget that raw, unpasteurised cheese like Corleggy maintains high levels of vitamins, all 8 essential amino acids and minerals like calcium, as Tom notes. Surely this makes Corleggy practically a health food, if you needed an excuse to dive into a wheel. Tom also explains the choice of sea salt to create the sturdy outer rind of Corleggy – “We want to keep our product as pure as possible and natural sea salt suits that endeavour best.”

As well as Corleggy original hard cheese made from raw goats milk matured for a minimum of two months, Tom notes that there is also Corleggy Kid, a fresh Raw milk goats cheese made weekly. Corleggy is constantly working on expanding the range and plenty of experimentation has resulted in various different varieties being added. “Creeny is a more matured hard Raw milk sheep cheese with a satisfying sharp finish. Let’s not forget our Drumlin, a hard mellow tasting raw cow’s milk cheese which also comes in a Beechwood smoked version” he adds.

Cavan may not be the first destination that springs to mind when seeking out world class cheese, but with Corleggy’s continued success, who says the French have the monopoly on fine fromage? The perfectly named Cavanbert, a moniker dreamed up by friend of the family Kevin Powell says otherwise. “It’s catchy and is definitely catching on!” says Tom of Corleggy’s contender for Camembert’s go-to status. A softer example fashioned out of raw cow’s milk, this unctuous cheese is giving authentic unpasteurised Camembert a run for its money in the flavour stakes.

As the old saying goes, teach a man to fish…if ever there was a school that would have students beating down the class room door, Corleggy’s Summer Cheese School is surely it.”It’s a 1 day course, and each student makes their own hard cows milk cheese from 10 litres of raw cows milk,” says Tom.

Now that is homework to pour over. As if crafting your own little round of raw milk deliciousness wasn’t temptation enough to enroll, Lunch at this fromage academy is unctuous Raclette and wine. While the dates have yet to be confirmed for 2017, I can scarcely think of a better way to spend a summer’s day and fellow fromage fiends best keep an eye on Corleggy’s website for dates. Having experienced first hand how one taste of Corleggy is never enough, meeting the Cropp clan at a recent RDS food show, Tom tells me ‘we love dealing directly with customers at Temple Bar Food Market on Saturdays and Dun Loaghaire Farmers Market, People’s Park on Sundays, but we are also very proud suppliers to lots of top restaurants and independent delis.”

If you can get your hands on it, try Corleggy’s own Port Jelly with your cheese haul. The petite pots won 3 Gold Stars at the 2013 Great Taste Awards and pair sensationally with any Corleggy cheese. Hand-making their own accompaniments like this proves just how dedicated the Cropp family is to crafting the perfect cheese lovers’ experience.

Whether it is a Christmas selection box easily capable of outshining Cadbury’s or a wedding ‘cake’ you would actually want to your new spose to shove in your face, Corleggy has dreamed up plenty of ways of presenting cheese worth celebrating. Three decades after relocating from her native Germany to work as an art teacher in the wilds of Cavan, it would become appear that Silke’s masterpiece is Corleggy and the rich Irish family cheese-making legacy she is creating. Each hand-wrapped cheese is a little work of art in itself, perfectly illustrating how magical Irish produce can be. 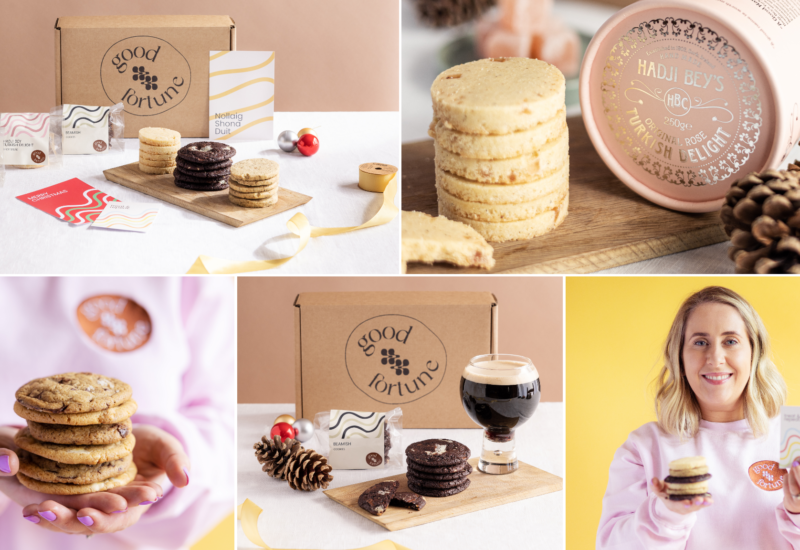