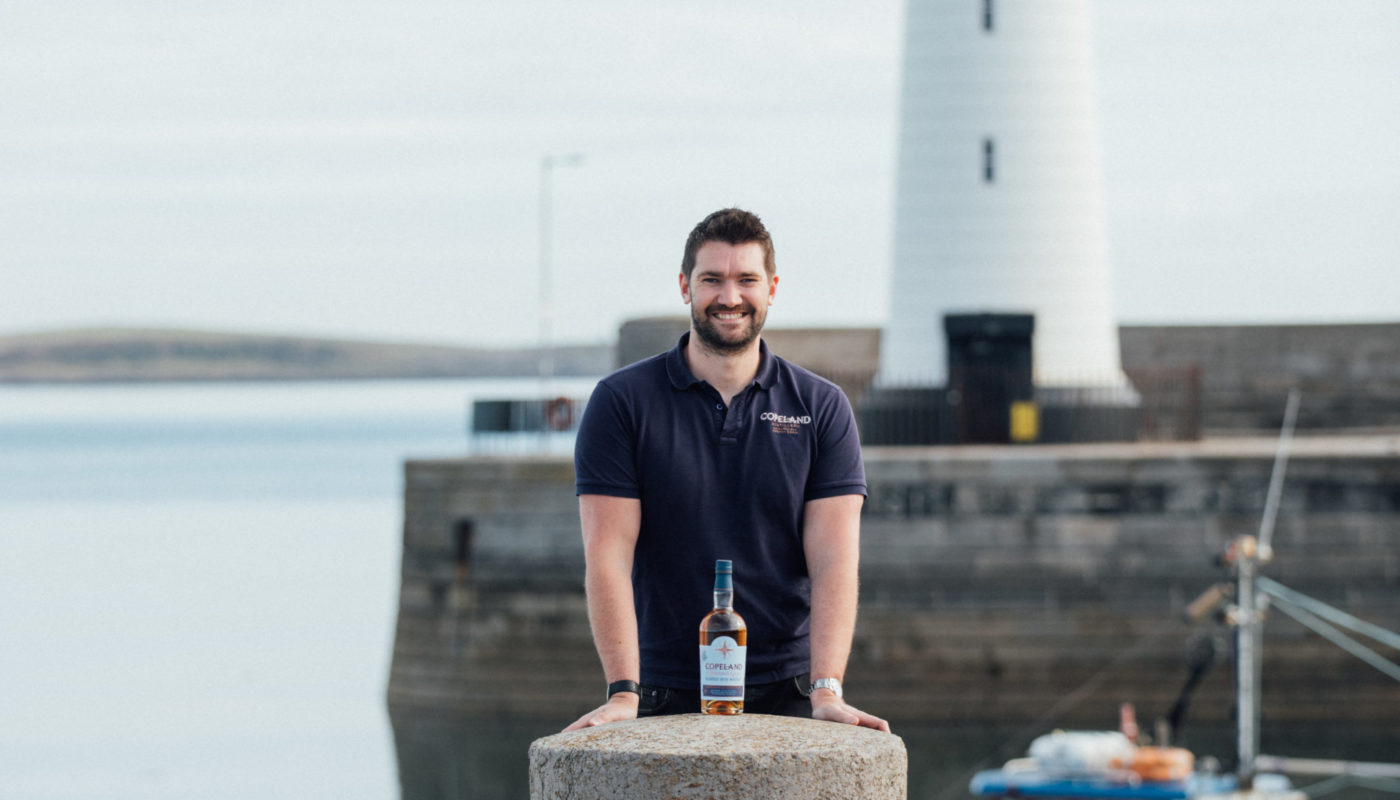 19 May 2020: The Copeland Distillery has today announced the launch of its first whiskey product, a blended whiskey called Merchant’s Quay. Its release marks the Distillery’s entry to a third spirits category having introduced a rum range in November 2020 amid the pandemic which joined its successful range of gins.

The Copeland Distillery revealed a major investment in whiskey production when it took on a 125-year lease at an abandoned cinema in the harbour town of Donaghadee in 2019, and have also produced malt and pot-stilled whiskeys that are undergoing the maturation process and are expected to launch in 2024.

Founder of The Copeland Distillery, Gareth Irvine, said: “Today is a huge milestone for all of us here at the Distillery. Merchants’ Quay, our first whiskey and only a taste of what’s to come, will support our goal of building credibility and establishing pedigree in the whiskey market in advance of the launch of our single malt and pot-stilled products which are currently being distilled and aged at the Distillery.

“We have ambitious plans when it comes to whiskey, as part of our long-term goal of creating a world-class, varied portfolio of spirits that represent a taste of Northern Ireland’s craftsmanship and history. There is a growing demand for Irish whiskey, at home and internationally, and we are already seeing huge interest across Europe, Asia and North America in The Copeland Distillery’s growing range.

“As with all of our products, it is taste, innovation and history that are important to us and Merchants’ Quay celebrates the connection that Donaghadee has had to maritime activity in Northern Ireland. The Copeland Islands and Donaghadee harbour, were busy trading ports for hundreds of years where ships have been launched, and casks landed, over the centuries.”

The Copeland distilling team and company founder, Gareth Irvine, collaborated with Brian Watts, Master Distiller at The Great Northern Distillery on all elements of the blending process for Merchants’ Quay. The result showcases the young Distillery’s ability to create sophisticated and unique cask and flavour combinations. An impressive and unconventional blend, Merchants’ Quay consists of three different whiskeys matured in four casks.

The end result is an amber colour that has a masterful bouquet on both the nose and the palate. An enjoyably sweet aroma of toffee apples and dark berries is layered above familiar undertones of vanilla and clove spice before a mild hint of fresh cedar hits. On the palate, Merchants’ Quay is a tasteful and complex experience of refreshing, fruity orange and honey whilst its finish is a contrasting yet complementary dry, toasty oak.

Claire McAlinney, Trading Manager at Musgrave NI, said: “At Musgrave, supporting local is a key priority and we are delighted to welcome the Copeland Distillery’s new whiskey to SuperValu and Centra stores. Merchant’s Quay is an exciting addition to our shelves as it responds to a growing demand from our customers for a local whiskey that is as robust in character as it is in its storytelling and connection to Northern Ireland. The Copeland Distillery continues to grow and innovate and the addition of a whiskey to its range, alongside its gin and rum, makes for an appealing selection for our off-sales customer.”

Irvine continued: “Of course, as our first whiskey offering, we would be excited to introduce Merchants’ Quay at any time of the year, but the current timing, with hospitality businesses reopening, makes this launch both meaningful and rewarding.

“It’s been a challenging year for us with our Distillery not being able to host tours and events as planned and we know for our friends and peers in hospitality, it’s been a rollercoaster. We’re hopeful that the coming weeks will bring a renewed sense of purpose and opportunity to everyone in the trade, and new launches represent a key part of working together to build our businesses back up.”

Merchant’s Quay is priced at £31.99 (RRP) for 700ml. It is available to purchase online at CopelandDistillery.com and in SuperValu and Centra stores across Norther Ireland, along with selected independent off-licences, from Thursday 20th May. Trade enquiries are welcome to trade@copelanddistillery.com.