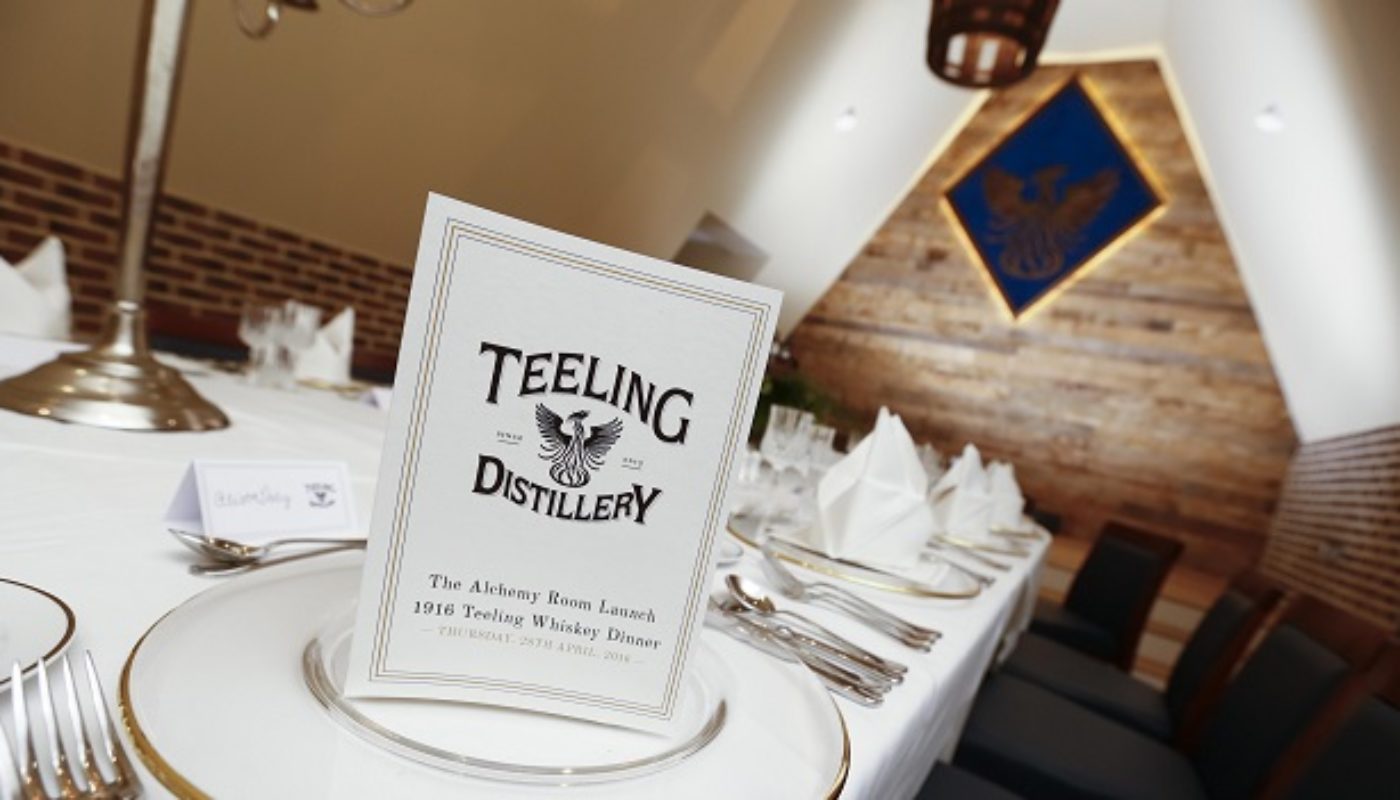 The Teeling Whiskey Company has officially opened The Alchemy Room, a dedicated event space in the heart of the Newmarket based distillery. To celebrate the launch they hosted an exclusive 1916 themed dinner designed and executed by food historian Regina Sexton and the Kemp sisters company Feast Catering. With the team in Teelings, they created a menu that harked back to the food of 1916 with whiskey elements in the dishes and whiskey pairings on the side.

Decked out in warm wood with hand crafted whiskey barrel chandeliers, The Alchemy Room is a unique space that can be adapted for many uses including sit down dinners and drinks receptions. It was named for the the “magical process of creation and transformation which reflects the art form of whiskey making” as explained by Stephen Teeling of the Teeling Whiskey Company.

On the night of the launch it was decked out in an authentic 1916 style with stand-alone candelabras in between flowers arrangements reminiscent of the era. Each detail had been meticulously planned by the organisers from the glassware to the patterns in the cutlery and, of course, the food.

Food historian Regina spoke about the food and drink of 1916 and the menu she designed with the Kemp sisters was actually based on the Saint Enda’s Menu, a dinner that took place in 1911 featuring prominent Irish figures.

Throughout the meal Master Distiller Alex Chasko talked about the historical significance of whiskey making in the Liberties and led the tasting for all the samples.

Jack Teeling, founder of the Teeling Whiskey Company noted; “We are delighted to finally launch The Alchemy Room to visitors and customers alike. We wanted to perfect our visitor experience within the Distillery before building this distinctive space and having recently won World’s Best Visitor Attraction at the World Whiskies Awards, the timing was perfect to reveal it to guests. We wanted to celebrate the launch with a special night and together with Regina Sexton and Peaches and Domini Kemp, we created a menu inspired by 1916. We’re based in the Liberties, an area of Dublin that went through a lot during that time and we wanted to honour this period with a night that was completely unique in a unique setting.”

Food historian Regina Sexton added; “I am struck by the fact that a company which is still in its early stages wanted to do something so complex and respectful of this period. Jack, Stephen and their team were ever willing to work together to devise an event which was unique and something guests will remember for years to come. Together with the wonderful creativity of Peaches and Domini Kemp we created an experience with strong resonance of early 20th century Ireland. The menu was very special given its connection with so many prominent figures in 1916 and in reproducing it, we got a very good insight in to the dining rituals of the period. Furthermore, to set it in the heart of Dublin and in the perfect setting of The Alchemy Room made it a truly unforgettable night.”

For more information on The Alchemy Room or to tour the Teeling Whiskey Distillery, visit www.teelingdistillery.com, call +353 (0)1 531 0888 or via email reservations@teelingwhiskey.com.