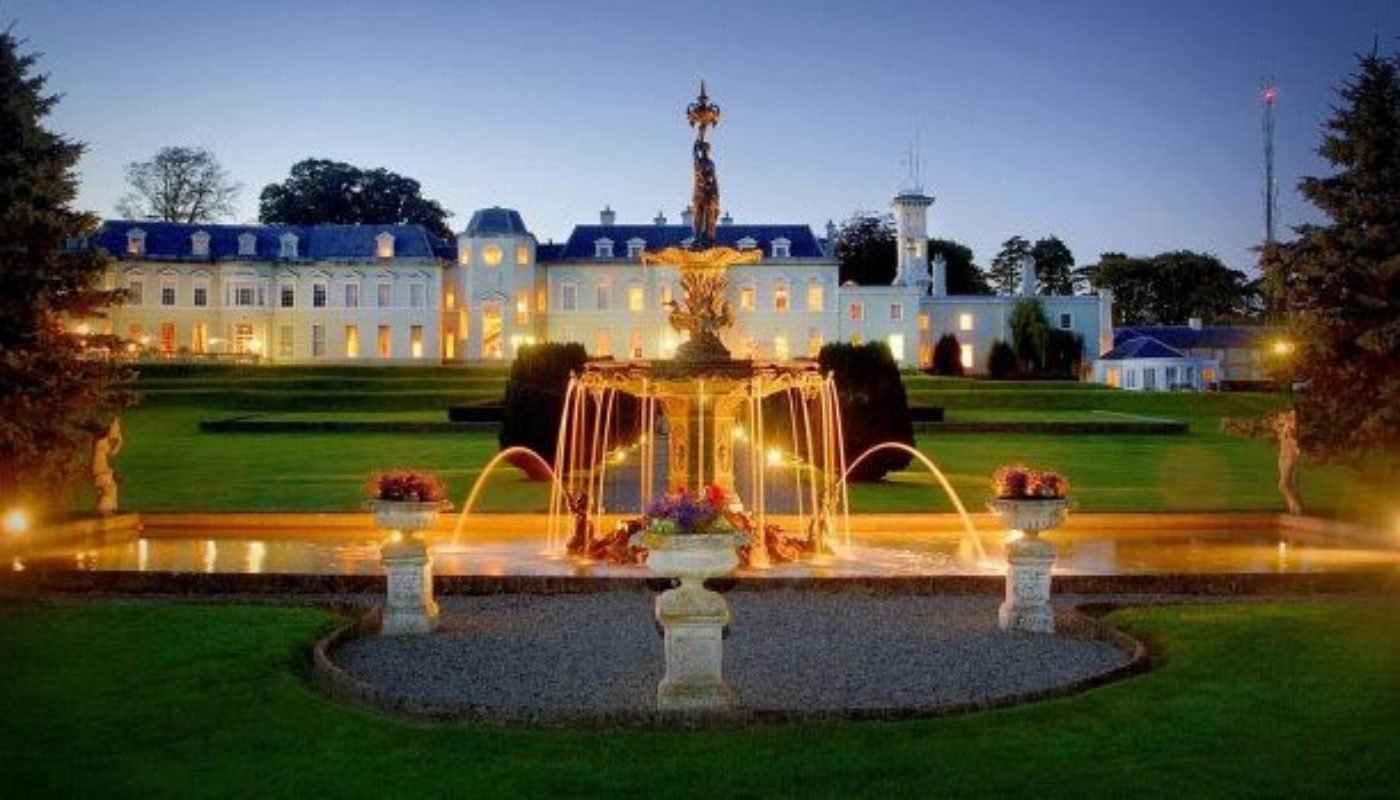 Teeing up for an Afternoon to Remember – The K Club Review

Sundays are so often pigeon-holed as the preserve of the cult-like brunch craze, but long before we flocked in our droves to devour eggs in all their incarnations, another leisurely and indulgent ritual was King, or indeed Queen. Let them eat cake, quipped Marie Antoinette in surroundings not dissimilar to the magnificent K Club, where Afternoon Tea beckoned on a crisp January Sunday recently.

After a mere 40 minute drive from Dublin to Straffan, Co. Kildare, we surrendered the car to the valet and stepped across the threshold of Ireland’s only AA 5 Red Star rated property – we had well and truly arrived. The K Club of course is best known for its Championship Golf Course of the same name, which has provided the backdrop for the Irish Open on many occasions but most notably played host to The Ryder Cup in 2006.

Unlike my dining companion, I am far from a golf enthusiast, but my interest was piqued having read(swooned over) the K Club Cookbook, one of the most beautiful coffee table tomes of Irish cookery available. From this I could deduce that the kitchen prides itself on sourcing and supporting local producers of the highest calibre and intrigued by the stunning collection of recipes, I couldn’t resist sampling a taste of the K Club myself.

Having been warmly welcomed, we settled in to a vintage china topped table, set facing a French window overlooking strikingly beautiful manicured gardens. The lavish chandelier lit Chinese Drawing Room, opulent and inviting with an open log fire, was the perfect backdrop for such a view. In truth, had they brought us lukewarm Barry’s and cardboard scones we probably would have been happy just lapping up such a magnificent setting. Managing to stay on the straight and narrow and avoid the temptation of Champagne, we ordered Chinese Drawing Room Afternoon Tea, €33 each, but a ‘light’ Afternoon Tea option of just pastries was also offered for €20, a delightful alternative.

The aforementioned pride in supporting small artisan producers was attested to the second we sat down, as I spotted K Club adorned mini jars of confiture, sourced from nearby Laois producer G’s Gourmet exclusively the K Club. Here, even the jam is a little bit special. These are the minor touches which, cumulatively, create the impression that no stone has been left unturned to create a unique and memorable dining experience. A sideboard of Ronnenfedlt teas alongside our table caught my eye, displaying a well curated selection of classics and unusual picks, but my decision was an easy one. Irish Whiskey Cream Tea called my name and rightfully so – smooth, oaky, brimming with smokiness, warm cocoa and vanilla cream aromas, this is as close as you can get to a crave worthy tea. John’s Lapsang Souchong was bold, charred, and punchy as you would expect from the star of the black tea world, but upon tasting my whiskey cream tea, the Lapsang would be relegated to second place. I fully intend to source this tea for daily consumption, a bold statement for a coffee addict.

With the gorgeous garden views and the sumptuous brew before us, we were extremely contented before our baked bounty even arrived but as soon as our twin three-tiered stands hit the table, the smell of freshly baked scones filled the air – almost hypnotic. But first, ritual dictates sandwiches are seen to. Afternoon Tea sandwiches can be dry as a bunker and dull as a typical Irish day, so in truth I never look forward to what feels like a mere savoury formality before sweet indulgence. While it was my first time spotting crisps alongside Cucumber Finger Sandwiches, I can’t say it was an unwelcome touch, a quick break from tradition, as was an open Honey Glazed Ham Sandwich on Tomato Bread. Thickly sliced honeyed ham was sticky, sweet and moreish, even after the festive period I couldn’t resist this. For me, bread has to be a little bit different to entice and the dense, richly flavoured tomato bread was just that, meriting being devoured. I usually like to pace myself with Afternoon Tea and graze conservatively at the sandwich stage but this rule of thumb went out the French window with this delicious offering.

A colourful triple-decker Smoked Salmon, Caper and Red Onion Finger Sandwich on wholemeal bread was surprisingly good for such a simple pairing and mostly devoured by John, who was quite pleased to finish mine after sampling a flavourful mouthful.

The top tier, two bountiful scones each with a ramekin of freshly whipped cream, called next. I will admit I am never wowed by scones, but can usually appreciate a well-made example, however K Club scones are quite unlike any other. A shortbread-like crisp exterior gave way to buttery flakiness, perfectly sweet and raisin studded with a generous icing sugar dusting. Topped with cream and jam, in that order on the Englishman’s insistence, these scones were not just well executed, they were flawless. It is no exaggeration to say these were the most delicious scones I have come across in my Afternoon Tea adventures. What appeared to be a Pistachio, Cranberry and Sesame Cake was a lithe bar of delicate lemon madeira with a smattering of my favourite nut. We had quite the debate about the coating, tahini icing? Caramelised white chocolate? Whatever it was, it lended a toffee-like creaminess to this delicious slice, like a beautiful iced fancy except actually enjoyable to eat – not a hint of fondant or faff.

A miniature Rum Baba oozed golden liquor when pressed with a fork – just how I like it. Moist, unrepentantly boozy and topped with a simple contrasting quenelle of creme chantilly and raspberry, I can’t imagine anyone disliking this. Two pastry forkfuls of pleasure. A petite individual Gingerbread Loaf was exceptionally light for a melted cake which can traditionally be quite heavy – all the density here was in terms of spiced flavour. On first glance, this was not the most exciting addition to an Afternoon Tea line up, but it was exactly what an element of high tea should be – the perfect accompaniment to a hot drop.

I briefly sighed at the sight of another sponge-based offering but quickly retracted my disdain – on tasting, Coconut Cake was a triumph with a cherry on top. Not unlike an Australian Lamington, this dessicated coconut flecked beauty may have been unassuming in presentation, but packed a buttery rich punch. Moving on to our next conquest, we discovered that which appeared first as a macaron was actually a lavender meringue sandwich, held together with silken buttercream. Elegantly bite-size, the meringue was first crisp, then melting in texture with a distinctive herbaceous flavour which thankfully wasn’t overpowering. A heavy-hand with lavender will always turn me off, but this was well-pitched and an enjoyably light pop of sweetness after buttery rich cake.

I always try to save the best for last, and after many a longing glance towards a pitch black cube of layered chocolate gateau the time had come. Bitter, brooding and unashamedly dark, this felt like a petite mouthful of Sachertorte – dense, mouth-enveloping and utterly irresistible. Realising how absolutely perfect this final morsel was with whiskey tea, I may have commandeered John’s before he could finish it…this was the ideal end to a wonderful afternoon and I can still taste it. Still sipping on the last of what must have been our fifth teapot, I was unflinching in my desire to linger – you couldn’t have moved me for all the tea in China. So bedded in to our surroundings were we that the stroll through the perfect gardens we had drooled over all afternoon became a quick shimmy, as evening had fallen by the time we managed movement.

In surroundings this beautiful, tranquil rolling hills and views to take your breath away, there is simply no need for anything more than a whisper of gold leaf, delicious yet simple, well executed classics and the promise of lingering all afternoon. I often close my eyes when tasting, because for me flavour is everything. At the K Club I was worried I would be blinded by opulence, tapestries and chandeliers, but each element stood up to its magnificent surroundings in terms of flavour. Afternoon Tea at the K Club is grade A luxury – Championship Afternoon Tea.

In luxury properties across Ireland, Afternoon Tea can often be just par for the course – perfectly acceptable but nothing worth writing home about. At the K Club, the sandwiches were birdies, the scones eagles and that decadent cube of gold flecked chocolate ganache perfection? A rare albatross. I assure you, it isn’t the whiskey tea talking when I say Afternoon Tea at the K Club is a must-try.