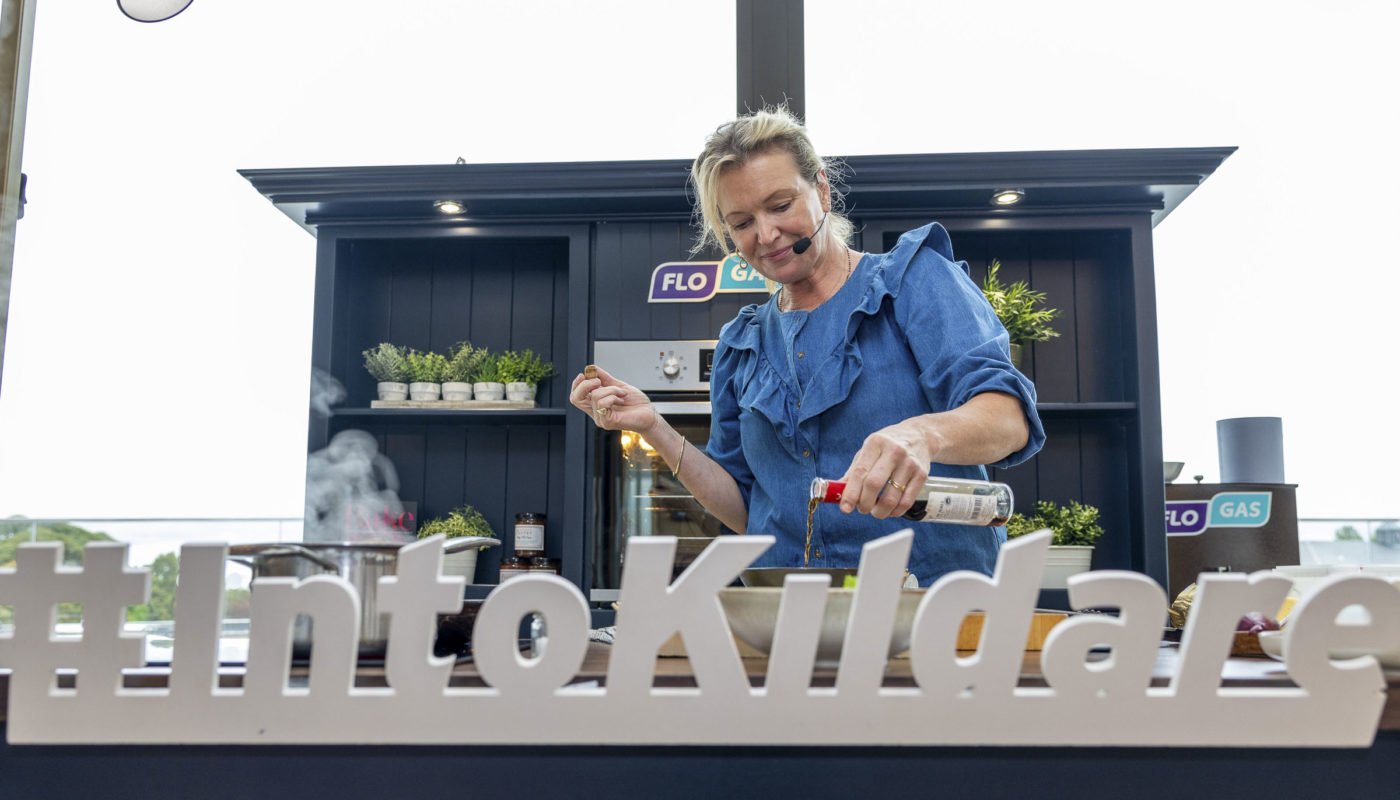 Taste of Kildare, organised by Into Kildare was held at The Curragh Racecourse over the weekend (Saturday 24th and Sunday 25th of September). Thousands of people descended on the Kildare track where they enjoyed a weekend of premier racing and culinary delights. Over 40 different food suppliers had stands or food trucks where they displayed and sold their produce which included everything from artisan breads to handmade cheese, decadent cakes and gourmet delights.

The Oaks Restaurant was the location for live cookery demonstrations on Sunday where local chefs demonstrated how they make their signature dishes and favourite meals. Celebrity chef, author and television personality Rachel Allen was one of the headline chefs on the day much to the delight of the huge crowds who gathered to watch her carry out two fantastic, interactive food demonstrations. The audience also enjoyed demonstrations by Nicola Zammit of Two Cooks, Graham Herterich of BAKE, Nathan Diamond of Ginger’s BBQ, Barry Flanagan of Lock 13 and Kildare Brewing, Michelle Lawler, The Nude Wine Co and Ian Mullarkey from the Clanard Court.

Meanwhile, the Leger Suite on the third floor was the venue for a decadent 8-course tasting menu which was prepared by some of the county’s leading chefs and restaurants. Guests at the ‘St Leger Tasting Experience’ began their culinary journey with drinks supplied by Wine Lab and canapés prepared by Las Radas in Naas. The guests then enjoyed dishes from Barberstown Castle, Fairmont Carton House, Fallon’s of Kilcullen, Glenroyal Hotel, Harte’s of Kildare, Killashee Hotel, The K Club, Two Cooks and Vie de Chateaux. A selection of fabulous wine was supplied by JJ Mahons, one of the largest independent drinks companies in the Leinster area.
Guests included an overseas delegation from Lexington City, members of the media, food writers and some well-known faces including travel expert, Eoghan Corry, publisher and media guru Norah Casey, retired jockeys Ruby Walsh and Conor O Dwyer and the Kildare Rose, Ashleigh Byrne. They were hosted by Áine Mangan CEO of Into Kildare and Into
Kildare board members, Brian Fallon of Fallon’s of Kilcullen and David Mongey, the Chairman of Into Kildare.

Áine Mangan CEO of Into Kildare thanked the guests and suppliers for attending and also the Curragh Racecourse for their collaboration and work on the festival which was deemed a great success. Addressing the guests in the Leger Suite she said, “The Curragh Racecourse is known as the ‘home of the classics’ while Kildare is also known as the Thoroughbred County due to our fantastic equestrian facilities, studs and racetracks. Classic Irish hospitality is also something that we are very good at here in County Kildare. We are fast becoming known as a foodie destination with so many great food suppliers and producers making waves in the culinary world. We are extremely fortunate to have award winning chefs, Michelin star restaurants and innovative food and drink producers here who continually push the boundaries and strive for excellence in both product and service.”
For more information on things to do and see in County Kildare see www.intokildare.ie