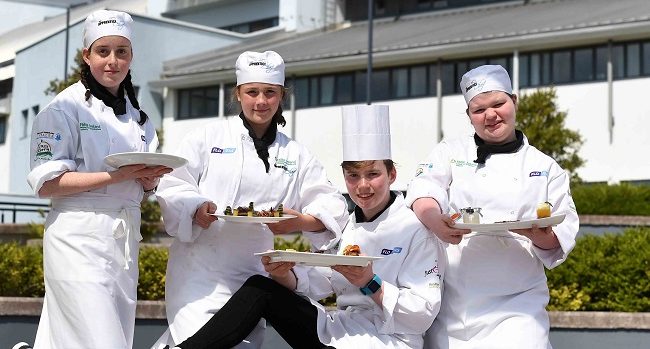 We’ve become accustomed to Kerry lifting trophies for their exploits on the football field, but yesterday one young Kerry student proved that the county can prevail against its competitors in the kitchen too.

On Thursday 11 May, secondary school students from across Munster travelled to IT Tralee but it was 17 year old Pádraic Randles from Pobalscoil Inbhear Scéine, Kenmare, Co Kerry who carried off the 2017 Supreme Apprentice Chef title. Joint second place was awarded to Emily O’Hara from Midleton College in Cork, for her pan-seared bream, and Lauren Wall from St Declan’s Community College, Kilmacthomas, Co Waterford who served up a herb crusted fillet of cod. This is the fifth year of the Apprentice Chef Programme which was established by Mark Doe of Just Cooking Cookery School and Mark Murphy, senior lecturer in Culinary Arts at IT Tralee.

Co-founder Mark Doe said: “Since the programme’s inception in 2012, we have delivered a series of demonstrations and workshops to over 2000 students attending schools in Kerry, Limerick, Cork, Tipperary, Waterford, Kilkenny and Wexford. Our objective is to promote the importance of healthy eating to enhance physical and mental wellbeing, encourage young people to consider a culinary career to help combat the current chef shortage in Ireland and improve their self confidence. Year on year we are overwhelmed by the high standard of the dishes produced by the students and we look forward to building on the programme’s success to take it to national level.”