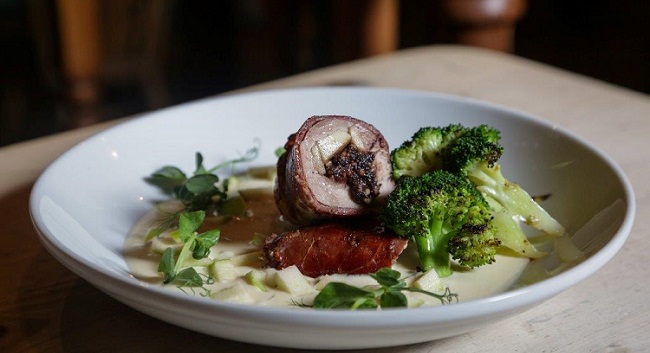 1. Preheat oven to 190˚C / 375˚F / Gas Mark 5. Cut a lengthways slit in each pork fillet to make a pocket.
2. Fill each pocket with apple and cheese but don’t overfill. Wrap each fillet in Parma ham completely, using 4 slices per fillet. Cut each fillet in half.
3. Heat a large frying pan with some olive oil, add the wrapped pork fillet and cook until lightly browned all over, turning occasionally. Then transfer to a baking tray and roast for 10 to 15 minutes until cooked, remove from oven and allow resting for 5 minutes.
4. Cut each fillet in two and serve on a bed of braised red cabbage with champ.

Cream Sauce
1. Finely chop the onions, fry in a knob of butter until soft, add bottle of cider and cook until reduced by half.
2. Add your chicken stock, wholegrain mustard and cider vinegar and cook for 10 minutes then add cream, salt and pepper. Cook for a further 5 minutes to thicken and serve with the stuffed pork. Head Chef Mervyn Steenson Groucho’s On The Square has been with the restaurant for the past 10 years and lives by the rule of using fresh, local & seasonal produce wherever possible, all cooked from fresh in their own kitchen.

Ahead of the 2018 Armagh Food & Cider Festival, two of the region’s leading and award-winning chefs, Mervyn Steenson of Grouncho’s in Richhill and Gareth Reid of 4Vicars.

Mervyn and his team have created a stunning menu for the ‘Harvest Supper’ at Armagh Cider Company on September 21st. Held in a 17thcentury meeting house on the grounds of the cidery, the event will also herald the launch of Armagh Cider Company’s ‘Orchard Bramble Cider’ especially for the 2018 Festival.

With food and entertainment throughout, this will be a fantastic and memorable weekend for all to enjoy.