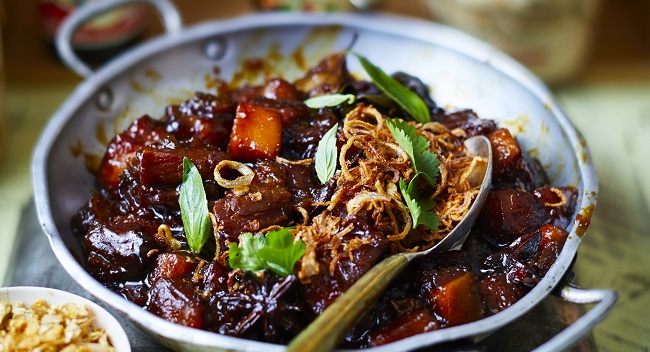 Ever since I tasted sticky pork for the first time at The Begging Bowl it has become one of my favourite things. This pork belly recipe is rich, sweet, salty yet savoury flavours make it the perfect dish to impress friends. In Thailand, it is often eaten with rice and green papaya salad, but it’s great just as it is.

1. In two separate saucepans, bring some salted water to the boil. When boiling, reduce the heat to a simmer and drop the whole pork belly into one pan and the pumpkin pieces into the other.
2. Cook the pumpkin for 4–5 minutes, then refresh under cold running water. It should be soft but not mushy, and still firm and holding its shape.
3. Sprinkle the pumpkin with the salt.
4. Cook the pork belly for 12–15 minutes, making sure the water does not come to a boil – the slower it cooks the more tender it will be.
5. Remove the pork from the pan and set it aside to cool slightly, then chop it into 2cm chunks. Preheat the oven to 160C/gas mark 3
6. Next, make the sauce. In a separate ovenproof dish, add the palm sugar, oyster sauce, soy sauce, pandan leaf, cassia bark, star anise, bay leaves and 50ml of the fish sauce.
7. Heat gently and when the sugar has melted, add the pork belly and stir well, making sure to coat all the pork in the sauce.
8. Place some parchment paper over the top of the pork mixture and transfer to the oven for 30 minutes.
9. Remove the dish from the oven and delicately fold the pumpkin into the mixture, making sure not to mash up any pork or pumpkin as they will both be tender and soft due to the cooking process.
10. Return to the oven for a further 10–15 minutes. The pork should be slightly caramelised and tender, and the pumpkin should be soft.
11. Meanwhile, heat the oil to about 180C in a medium saucepan over a high heat.
12. To test the temperature, drop a piece of shallot into the oil: it should bubble and fizz in a controlled manner; if it hisses, then the oil is too hot, so turn off the heat and allow the oil to cool for a few minutes before trying again.
13. Fry the shallots until they begin to turn golden brown, then remove and drain on kitchen paper. Use a fork to pick apart the shallots. They will crisp up nicely as they cool.
14. Serve the sticky caramelised pork and pumpkin straight out of the oven, topped with the spring onions and crispy shallots.
15. Serve immediately and, as suggested in the introduction, with a salad and some Thai sticky rice for mopping up all the rich juices. Sebby Holmes has worked in kitchens since the age of 13. He fell in love with Thai food whilst working at the Begging Bowl in Peckham. In Cook Thai, he features the dishes that have seen crowds queuing round the block but also dishes that can be made at home. His recipes use ingredients that can be easily be found in supermarkets, and include essential pastes, dips and pickles that can then be used as a starting point to explore this fragrant cuisine. A genuinely modern cookery book providing a refreshing, eclectic mix of south-east Asian dishes.