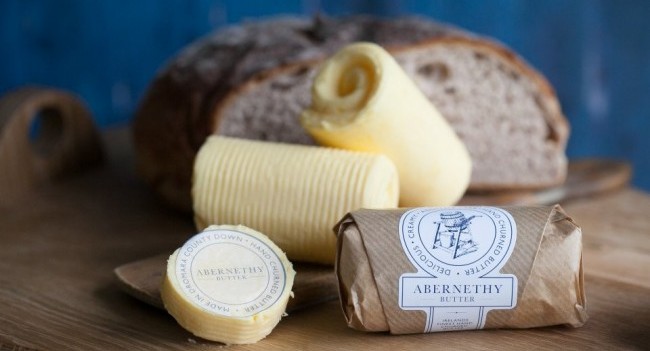 There are many who would count a schmear of butter on a thick slice of crusty toast as one of life’s great simple pleasure. Good news for those who enjoy a golden pat or two; natural, real fats are now being heralded as good for everything from your bones to your britches. Of course, vitamin and mineral dense milk from grass fed cows makes healthier butter, and only the best goes into Abernethy Butter, sourced from a local farm where cows graze on the lush green pastures of the Lagan Valley.

“Butter is better as it is a natural product. Margarine is full of chemicals”, agrees Allison Abernethy. Their perfectly fresh, richly flavoured, additive-free butter, containing nothing but fresh cream and salt, is far superior to anything you could find on ordinary supermarket shelves. Allison and her husband Will inherited their butter making skills from Allison’s father Norman Kerr and since turning their hobby into their livelihood six years ago the successes have been rolling in, literally. 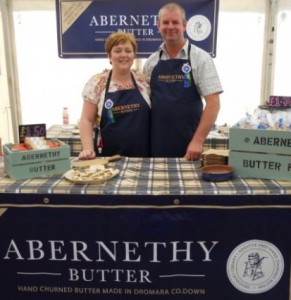 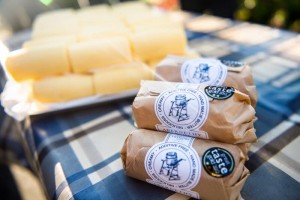 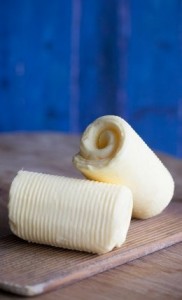 Their hand churned rolls of butter are now stocked everywhere from local farm shops to one of the most luxurious department stores in the world Fortnum & Mason. Abernethy Butter is also scooped, dolloped and melted at the best Michelin starred restaurants from Heston Blumenthal’s, The Fat Duck to Marcus Wareing at the Berkeley in Knightsbridge. Allison says that signing up to Twitter was a turning point in growing awareness of Abernethy Butter, “it is the main way to interact with chefs. Social media is the way to go”.

As well as superstar chefs, the Abernethy’s count the Queen, Hilary Clinton and Barack Obama among their fans. Abernethy Butter has also made up the gangway of the largest private residential cruise ship on the planet, The World, when it docked in Belfast, whose residents pay upwards of $600,000 for a private apartment. Winners of multiple Great Taste awards, in 2015 Abernethy Butter was also recognised as a ‘Food Star’, among 50 of the UK’s most promising food and drink entrepreneurs, the only Northern Irish food producer to be featured. 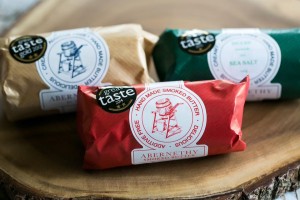 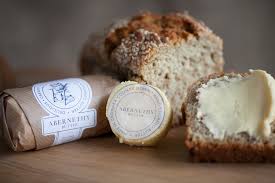 The pair initially began going to local fairs to demonstrate how cream is churned and turned into butter, but they soon spotted a gap in the market and an appetite for “real” butter. The couple spent years searching for the perfect cream to make their butter, which they now source from nearby Draynes Farm. According to Allison Northern Ireland produces the most yellow butter in the world, “the yellow comes from the carotene in the grass. We use the best cream we can source in Northern Ireland”. Heritage is just as an important ingredient; though no longer used the same small pot-bellied 1930s metal churner Norman used still stands in the corner of the converted kitchen Will and Allison now use as their factory.

600 rolls of butter are produced each day on Allison’s family sheep farm in Dromara, County Down, where the couple live with their two children Laura and Stuart. Proper butter takes time, 10 hours churning each day for Will to be exact. Though Allison says the laborious process is worth every churn and is what sets them apart from other butters on the market, “big butter companies don’t churn any more but force butter from the cream”. A procedure that enables butter to be made quickly but with little taste. 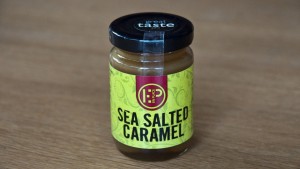 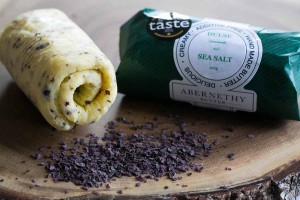 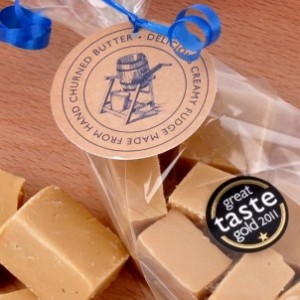 Abernethy Butter are the only Northern Irish company to make butter by hand using traditional methods, and an old family recipe. “Our butter however is lovingly handmade to ensure it is creamy and full of flavour”, Allison says.  She talks me through the process; the cream is first churned until it separates into butter and buttermilk. Then the butter is put into a large bowl and washed by hand until the water runs clear. After adding a pinch or two of salt the butter is patted by hand out into rolls and then wrapped in greaseproof and Abernethy’s distinctive brown paper and blue and white label.

Another award winning product is their Butter Fudge, that is imbued that unmistakable, unique Abernethy taste. Their butter is also a key ingredient, along with butterscotch vodka and Irish Atlantic sea salt, in the Great Taste Award-winning Sea Salted Caramel from En Place Foods. Allison’s favourite way to enjoy Abernethy Butter? For her, layered thickly on fresh bread is the only way, enjoyed in moderation, of course.

Though, it’s not only the distinctively rich creamy butter with a touch of salt that Abernethy’s fans have got a taste for, but the provenance and passion instilled in each and every roll.