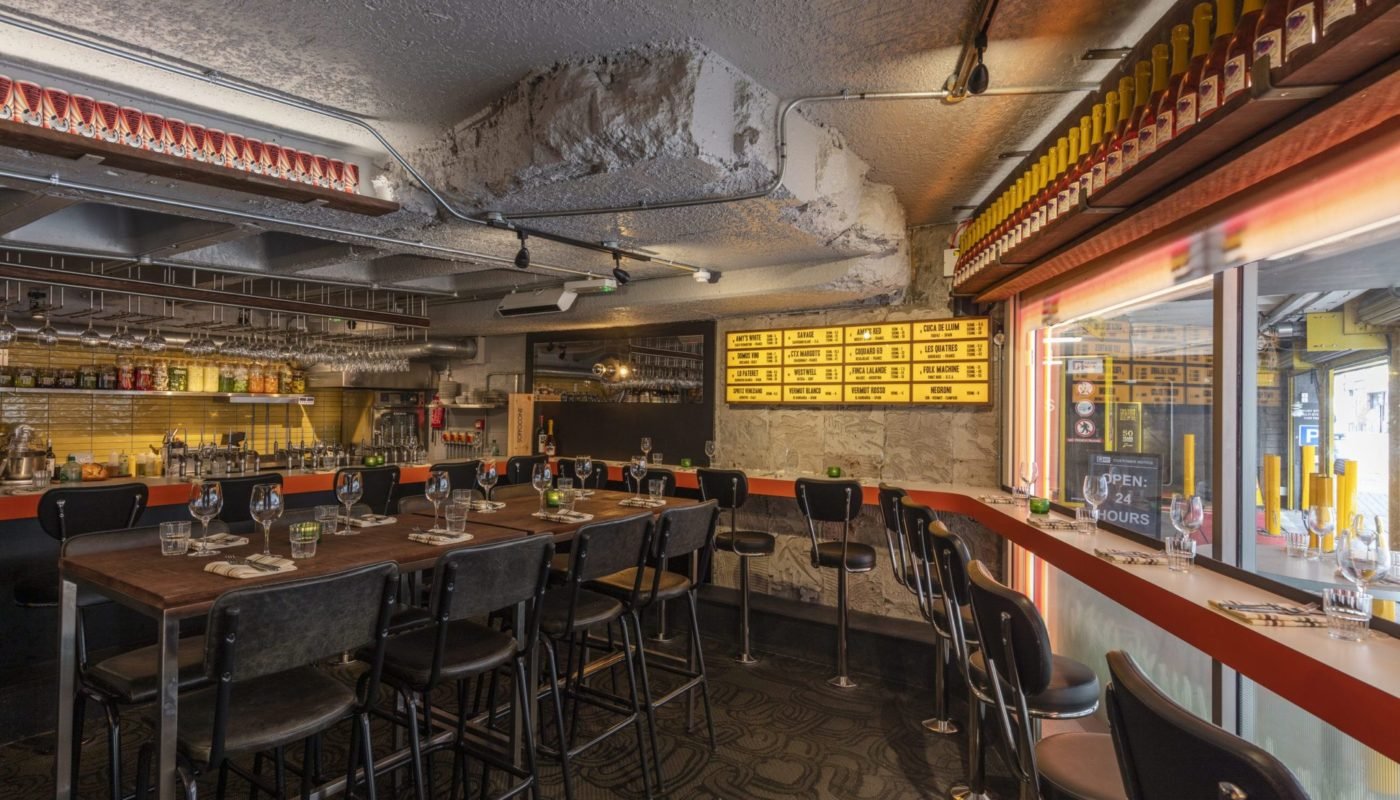 Home » She’s Not Like Other Wine Bars – Amy Austin Review

She’s Not Like Other Wine Bars – Amy Austin Review

Anyone now entering the Drury Buildings parking will be greeted by the words “I love you so much” written in pink over a black background. The phrase is both the tagline of the recently opened wine bar Amy Austin, as well as a low-key iconic piece of street art in front of a coffee shop in Austin, Texas.

Both the Dublin 2 venue and the graffiti are modest and relatively small but with plenty of personality and a relaxed, spontaneous coolness. The phrase was originally painted by musician Amy Cook as an impromptu gesture of love to her girlfriend and a decade later, it is a local favourite, with couples taking selfies next to it and even souvenirs quoting it.

Amy Austin, the Dublin wine bar, also celebrates love, in this case, love for wine, food and socialising. The venue sits 30, with one large table in the middle, and an extended bar with high stools bordering the walls.

The concept, by renowned restaurateur John Farrell, focuses on a simple but enticing promise: “A wine bar, but different.”

So, what’s different about it? On the décor front, it has a deliberate roughness (think exposed ceilings) and a funky mix of wall art, metals and wood. The music was an upbeat pastiche of pop, rock and disco (during my stay, American Woman, In the Navy and Lady Marmalade were part of the playlist).

Food-wise, an all-day menu included a few “out of the box” choices along with the usual suspects. The open plane allowed guests to look into the kitchen, where jars of home made pickles and fermentations offered a colourful preview of bites to come.

Last but not least, the drinks. Amy Austin’s wine menu included a mix of a dozen different wines on tap, brightly displayed on the lightbox sign on a wall, as well as a selection of over 30 bottles. A few cocktails on tap are still available.

After sipping on a Negroni (€8) while waiting to be seated (it was quite a busy Saturday evening), my guest and I ordered a combination of plates to share. Dishes arrived one after the other, a logic solution when space is precious.

First, three Carlingford Oysters with kimchi Bloody Mary (€9). The dressing complimented but didn’t hide the oysters’ delicate sweetness, a distinctive trait of these kind, sourced from Carlingford Lough and commercialised sustainably by a family-run company.

They went nicely with our two glasses of white wine: Amy’s White, a Sauvignon/Vermentino blend from the Languedoc (€6); and Duncan Savage, Salt River, a Sauvignon Blanc from Western Cape, South Africa (€9.5).

Then came the Yellowfin Tuna Crudo, with house ponzu, avocado and sesame (€13). A colourful and intensely flavoured treat: the tart kick of the ponzu sauce contrasted with the fatty, umami tuna and the light, creaminess of the avocado.

After the cold dishes, the first hot plate arrived. Three fried Dublin Bay prawns, with garlic toum, bisque and dill (€14), they were crunchy on the outside and tender inside. The toum sauce, a fluffy Lebanese speciality, matched them perfectly.

It was also time to try another glass. My guest went for Domaine Coteaux des Margots, from Macon, Burgundy (€10.5) and inspired by their American muse, I decided to try the Hobo Wines, ‘Folk Machine’, a silky Californian Pinot Noir (€13).

The last dish we had was also the best: Dexter beef cheek ragu, fried polenta and Parmesan cream (€12). The softness of the succulent portion of meat was matched with a side of gently seasoned polenta, tied together by a smooth blanket of cheesy goodness.

One thing I appreciated during our time at Amy Austin was that despite it being busy, the service was excellent. Always friendly, never rushed, and at a pleasant pace. The fact that the place is dog friendly and we were sitting at petting distance from the cutest pug is also a plus.

Our bill at Amy Austin came at €97.5 and it included oysters, a tuna dish, Dublin Bay prawns, Dexter beef cheek ragu, a portion of bread and four glasses of wine and a Negroni.

Amy Austin is open Monday to Saturday from 12 noon until late. On Mondays and Tuesday, they offer 25% off all wine and the veue is available for private hire for groups between 25 to 35 people.