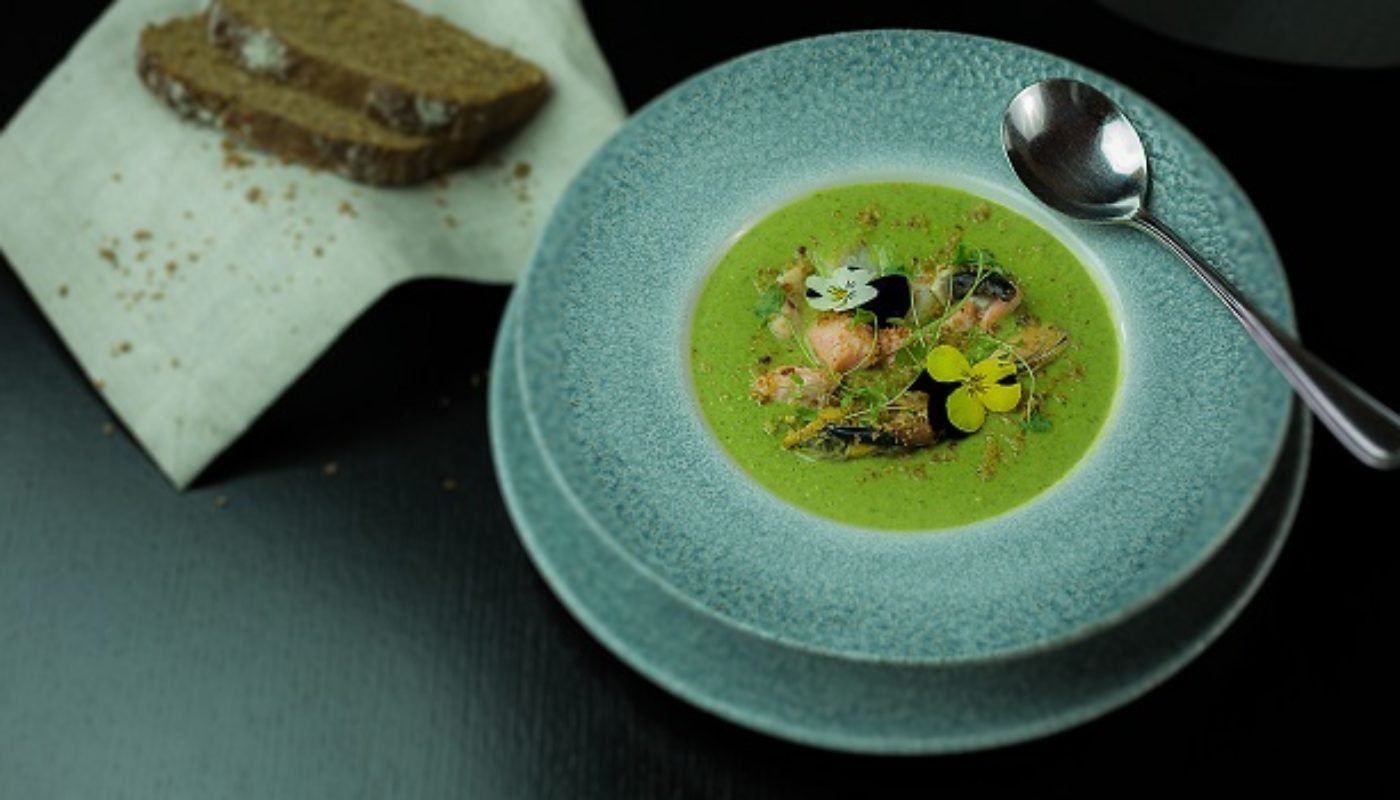 Seafood Chowder Recipe By Chef Stuart Heeney From Clontarf Castle. This chowder is made differently from conventional recipes. This chowder has a bright green colour from the blanched baby spinach, adding a stunning contrast with the poached seafood.

Method:
1. This chowder is made differently from conventional chowders as we cook the seafood separately from the soup/volute.
2. Start by making the volute, sweat the chopped leeks, sliced onions, chopped thyme and crushed garlic in a pot with some olive oil until soft and translucent, add the peeled and chopped potatoes and cook for a little longer.
3. Cover with the stock, bring to the boil, and then let simmer until the potatoes are soft. Blanch the spinach in boiling water for a couple of seconds then refresh in ice water to retain the colour.
4. Take the spinach out of the water and squeeze out the water from it. Add the cream and spinach to the pot and blitz in a food processer until smooth and bright green in colour; add salt to taste then place back in a clean pot until ready to use.
5. Meanwhile place your seafood in a shallow tray and put a couple of tablespoons of water and white wine over the fish with a couple of knobs of butter and place under a grill until the fish is just cooked.
6. To make the crumb place the bacon and brioche on different trays and cook both in an oven until they dry out then when they cool blitz them in a food processor until they become crumbs.

To serve
1. Heat the volute up in a pot until it comes to the boil and pour into a nice serving bowl only ¾ the way up, place the warm cooked fish on top of the volute in the centre of it and then sprinkle some of the crumb on top and enjoy with some nice wholemeal brown bread and butter. Stuart Heeney is a Dublin native and started his culinary career in the Michelin Star, Chapter One where he trained under Ross Lewis. He studied at the School of Hospitality Management and Tourism, Cathal Brugha Street, which has been synonymous with the hospitality and catering industry in Ireland since 1941.

Stuarts food philosophy is simple, local produce and sourcing lies at the heart of the menus, simple ingredients cooked with flair and imagination presented with finesse.