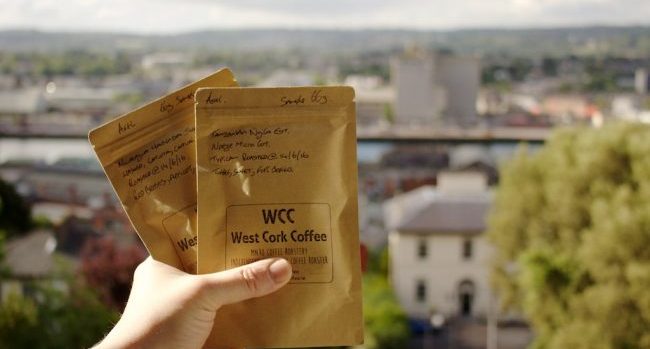 Coffee appreciation in Ireland is a fast growing foodie sub-culture. Drinking coffee is the new cool; an aspirational and sociable activity. Ireland’s newly discovered appetite for better quality, more nuanced speciality coffee started in Dublin but quickly found its way to Cork – a city that has embraced its coffee culture with impressive fervour.

Independent coffee shops are revered; owners are influencers are vocal in their demands for good people to never more be subjected to bad coffee. To spare Corkonians from such a fate, the Cork Coffee Trail will guide you to the city’s best independent coffee houses. But for all of this, the success of a coffee house boils down to how cool its beans are. Enter the speciality coffee roasters, and the newest kid on the block: Tony Speight of West Cork Coffee.

Speight doesn’t recall when he had his first cup of Joe, but by 2004 he had hand-built his first coffee roaster and in the process of doing so, whether he knew it or not, he had turned a corner from enthusiastic hobbyist to a seriously passionate artisan coffee roaster. West Cork Coffee was born as a commercial Micro Coffee Roastery in early 2016 after years of slow, organic growth; a dedication to honing his roasting skills and spurred on by his band of loyal fans to whom he supplied small quantities of speciality roasted coffee via his mail order website. Soon after, a small number of food businesses with an appreciation of excellent coffee came knocking looking for their own signature roasts. A couple of well-placed West Cork locations and interest in Tony’s endeavours started to surge, along with demand.

West Cork Coffee is in the process of moving into its first proper commercial premises. “All of a sudden, orders for my coffee just started to skyrocket. I couldn’t keep up with the demand with the space and kit that I had,” says Tony. Sooner than expected, Tony was facing into the decision of whether to stay small and turn away business or take everything up to the next level. Thankfully, he decided to set up the commercial roastery at The Old Forge in Innishannon, West Cork.

The size of the scale up is impressive. The roasting machine Tony was using for all his roasts up until a couple of months ago was a small but perfectly formed machine that had a capacity to roast approximately 1 kg of beans at a time. Next to his new Giesen roaster custom-built in The Netherlands with a capacity to roast up to 6 kg of beans at a time, Tony is still trying to catch his breath and take in how fast things are progressing. “I made sure I have plenty of room to fit a second Giesen when the time comes,” he says. Clearly he has done the math and sees even bigger things to come in the not too distant future. 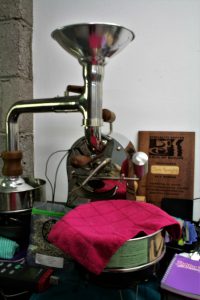 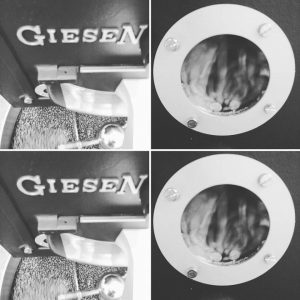 Everything about Tony reeks of precision. An electrical engineer by education and trade, his professional discipline is obvious. The roastery is spotlessly organised. There is a “just-so-ness” about this operation, in fact were it not for the lingering aroma of nutty caramel and bitters, you could mistake this for a lab – a giant chemistry set for coffee lovers.

“Checking the coffee at all stages of the roasting process is vital to see how things are going. There are lots of factors that can alter the roasting process: from the beans themselves, to the humidity and environmental temperature – even the quality of the gas that is used to fire the roaster.”

Aside from all of these almost immeasurable potential variables, there are those elements that can be controlled and is the true mark of the craft coffee roaster: conduction (the flow of heat) and convection (the flow of air), controlled by computer yet reliant on the roasters knowledge and expertise. Every element of Tony’s coffee is tightly controlled. He is hand selecting the beans he wants to roast and roasts depending on his needs and the needs of his customers, for having full control over the roast means that a little tweak here and there on temperature, humidity, time and maturation process can completely alter the flavour profile of the coffee: the same bean roasted, matured and brewed in a hundred different ways, each producing a different result.

It is often noted that wine follows chocolate follows coffee. Coffee, like chocolate, is grown in countries that are on, just north of or just south of the equator; the seeds of a cherry-like fruit. Different coffee plant varietals and growing locations results in variations of taste and flavour that are akin to terroir for wine. Both grapes and coffee cherries are picked by hand and, if the analogy can be pushed further, the roaster is like the winemaker and the barista is like a sommelier.

After Tony roasts his coffee beans they are left to rest and mature for up to 7 days in drums; wine is left to mature in barrels; chocolate is left to age before tempering. Viewed in this way, it should come as no surprise to anyone to see the rise of artisan chocolate and coffee makers elevating the appreciation of these to the same heady levels as that afforded to wine. One thing that comes across when you meet Tony is his enthusiasm for sharing his knowledge. He is passionate about helping people learn about coffee appreciation. “Education is key to coffee appreciation, something I hope to promote. To be able to teach people about how much variety there is in coffee is absolutely key. Coffee should taste fruity as well as carrying deep rich flavours like chocolate, caramel and nuts,” he explains.

“It shouldn’t just taste burnt and bitter – usually a sign that the coffee has been over-roasted to disguise the flavour of poor quality beans.” Having control over the roasting process enables Tony to roast beans for as short or as long a period of time as needed to uncover the full flavour potential of the bean. From a light-medium roast for a fruitier, more complex flavour profile to a dark roast for a richer, headier flavour profile – individual characteristics of any given bean are allowed to shine through.

Almost on point, he offers to make me a coffee. Today’s coffee is from Brazil: Fazenda Ouro Verde, Acacia, natural process and promises to deliver flavours of red fruits, hazelnut and chocolate. Watching Tony brew me an espresso is a masterclass in precision itself. Everything is weighed and a precise measure of coffee is ground (18.5g to be exact). The coffee pours and as it stops he declares that he pulled it a little longer than he would normally do. Placing the glass before me, I note how the coffee is settling in the same way a well-poured pint of Guinness would settle. “It’s the sign of a good crema”, I’m reliably informed. I immediately get the red berry taste, tarter than I imagine – somewhere between a redcurrant and a cranberry.

The chocolate is prevalent (a nice treat), and although I don’t pick up obvious hazelnut flavours, the coffee is smooth. The fruitiness produces a pleasing tartness from the tannins but it isn’t bitter: a refreshing change from the ubiquitous coffee on offer and seemingly unavoidable.

So what does the future hold for West Cork Coffee? As online orders continue to grow, there are also exciting times ahead as more outlets start stocking and brewing his coffee right across Cork County, including a blooming relationship with Dukes Coffee Co in Cork City and Food Depot in West Cork (proprietor Diana Dodog, former Masterchef Ireland champions gourmet street food offering and all round local food champion) – proving to be a real confidence boost. “Cupping events and roasting workshops are high on the priority list for me – I really want to make coffee education a key element of what West Cork Coffee does. The over the next 6-8 weeks things are really going to be taking off with new cafes opening that will be stocking my coffee as well as established coffee shops too. There are no plans yet to open a café of my own, although it would be a nice thing to work towards – to be able to source, roast and brew in my own place. But something tells me I would be happiest roasting – pen in one hand, experimenting and achieving the perfect cup of coffee.”

The paradox of the craft food movement is that it requires free flowing creativity and forensic control to somehow find a way to be happy bedfellows. More likely to repel each other than work together, there is one factor that creates the perfect environment for the two to meld as one – the craftsperson. Tony perfectly fits that mould to a T. Or should that be Coffee? Kate Ryan is a food writer, blogger and founder of Flavour.ie a website that is dedicated to promoting West Cork Food through writing, events and tours. Kate writes regularly for The Opinion Magazine and The Southern Star newspaper and has been featured in the Irish Examiner and Irish Times. Her blog is recipe driven showcasing the best of West Cork produce and encouraging everyday cooking with it at home as well as the best places to eat in the region. Kate hosts a very popular social dining “Supper Club” as well as organising a variety of food-related events getting people to enjoy great local food together. In the summer season, Kate also runs the only guided Walking Food Tour of Clonakilty which takes place every Friday June to August and is accredited by Fáilte Ireland for the Wild Atlantic Way. Kate is also a judge with Blas na hEireann and the Irish Quality Food Awards.