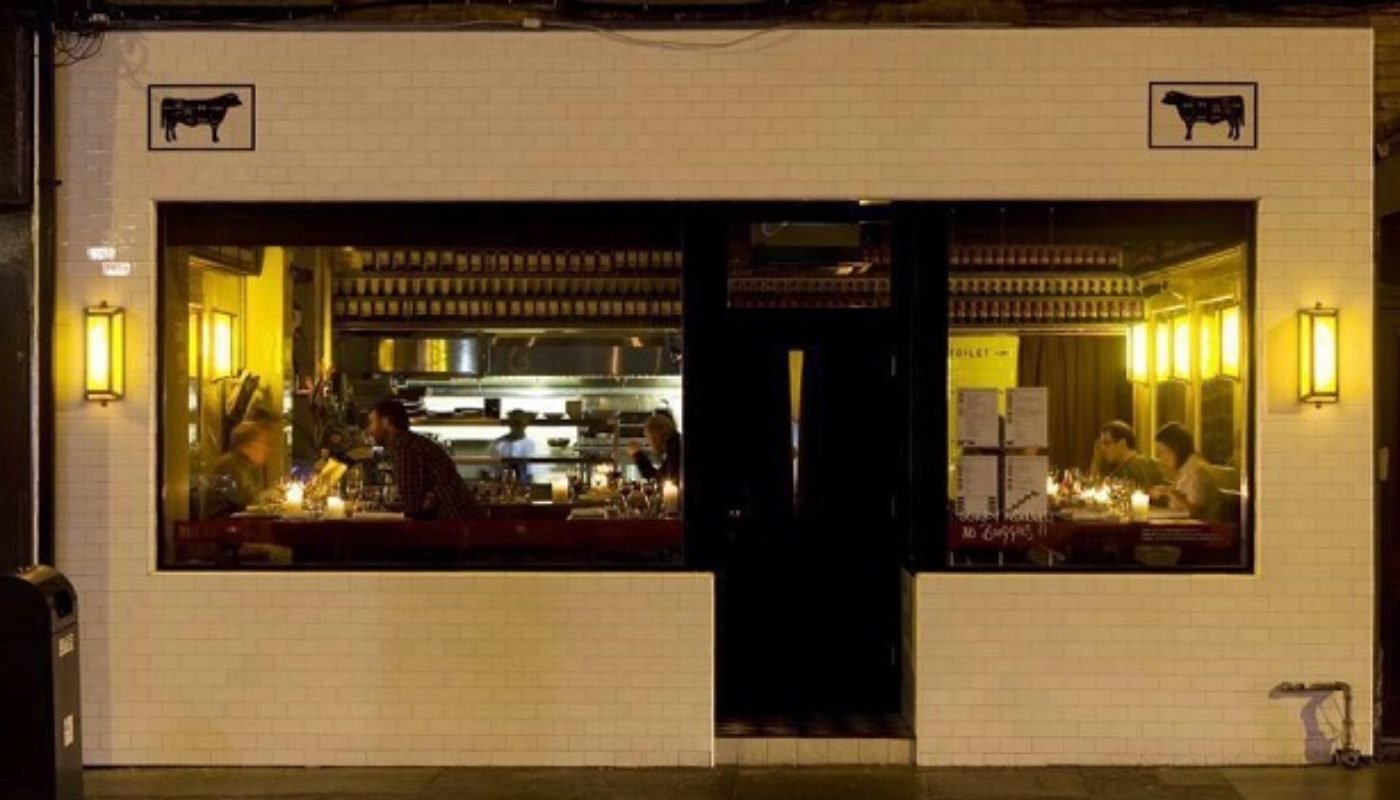 Home » Save Me From Myself at The Butcher Grill – Brunch Review

Save Me From Myself at The Butcher Grill – Brunch Review

I have a confession to make – I’m not really as into the whole brunch thing as the masses appear to be. Do I brunch? Sometimes. Is it the highlight of my week eating-wise? Rarely. I want breakfast, lunch and dinner and I don’t feel like I need an excuse to have a drink during the day. In a bid to see if I could finally embrace the hype of the hybrid meal and make brunch my beloved, I entrusted its fate to the Gods…of good meat.

Carnivore Mecca Butcher Grill is, in my humble opinion, the jewel in Ranelagh’s foodie crown. As I live just around the corner, I pass by every day and can genuinely say pangs of temptation hit me HARD every single time I gaze in or catch a whiff of flame-drenched steak. The seats at the window are never empty once the grill is fired up to satisfy the carnivorous cravings of Dublin’s discerning meat lovers, who flock here in their droves every evening.

Best known for serving up Cote de Boeuf like its nobody’s business in uber instagram-friendly surroundings designed by the ‘rockstar restaurateur’ John Farrell,  The Butcher Grill joined its sister restaurant Dillinger’s in Ranelagh in 2012 and has been thriving ever since. Housed in a former butcher shop, an intimate, relaxed space has been carved out here with white tiled walls and rugged aged wood finishes reminiscent of its roots. The kitchen is a petite open playground wafting the scent of seductive smokey steaks from the moment you arrive. Inhabited by chef/grill maestro Atish Bhuthruth, this is nestled behind a bar counter which mixologist and all round bon vivuer Sergio uses as a stage for his theatrical cocktail creations, in between keeping guests entertained with his magnetic personality.

While dinner at Butcher Grill is accented by candlelight, brunch is a more laid-back affair with tunes humming and plenty of punters imbibing tumblers filled with Sergio’s hedonistic handiwork. As we settled into our high stools I already knew that my poison of choice would be a signature Smokey Old Fashioned(€12.50), which sees an oak plank blow torched to infuse the Woodford Reserve and pecan bitters base with a seductive smoked undertone. This dream dram is finished with a stick of candied bacon, which makes whiskey indisputably a legitimate brunch inclusion. Maria sought something a little lighter to combat the ills of a night before and opted to sample a Watermelon Brunch Punch special, which was what Nigella would call ‘slut-red’ and similarly easy, screaming summer refreshment. A restaurant serving cocktails this good is a rarity.

Sat by the window, in prime people watching position, we finally managed to draw ourselves away from our cocktails to glance upon menus, psyching ourselves up for the feast which lay ahead. I noted how extensive the menu was for a brunch offering, with a starter, egg, grilled mains and dessert section where some eateries serve only a handful of run of the mill offerings at this time of day. In the interest of making an afternoon out of our brunch, we gilded the lily and decided to order starters, ‘to fully appreciate the menu’, read: to gorge.

Aware of the fact that the city’s best Mexican, 777, is the sister restaurant of Butcher Grill I felt safe ordering Tuna Tostadas(€12), which normally I would shy way from in a steakhouse setting. My investment of trust in the quality of Atish’s cooking and the John Farrell group’s commitment to sourcing the finest ingredients for every single dish paid dividends. Sashimi-style tuna, having seen the most modest kiss of a flame, sat under guacamole good enough to eat by the spoonful on crisp tortilla disks. Finished with dots of fiery chipotle mayo, refreshing radish shavings and crisp shallot rings, these were faultless mouthfuls worth fighting over. Sticking to the theme of light starters (they all appear to be, in anticipation of beastly meaty mains) Maria opted for Gambas with Iberico Chorizo, Red Peppers and Pickled Grapes(€11), five generous and bulging Gambas which although meaty were cooked just to the point of succulence. The pool of chorizo-studded red pepper sauce they sat in was happily mopped with a crisp crouton dotted with sweet hits of pickled grape puree which really elevated the traditional tapas-style dish and made it unique in its own right. Starters set the bar high. While there were numerous enchanting entree options from Duck Hash to Battered Monkfish, Maria and I agreed having opted for seafood starters it was well and truly beef time. Maria felt that, when in meat heaven, it was only right to turn a hunk of meat into a harmonica and chose Baby Back Ribs(€14.50). On food that requires dexterity and tactile prying, like ribs and chicken wings, I am not generally sold. It takes quite a lot to make me want to get my hands dirty, but embracing brunch meant I had to roll my sleeves up. A massive rack arrived, glistening in stickily sweet BBQ sauce and aching to be gnawed on. But these ribs barely needed the tease of a tooth to fall away from the bone, meltingly tender and subtly smokey, a graveyard of clean bones was the inevitable outcome, a pile which I happily contributed to. Having thoroughly enjoyed dismantling the ribs, Maria swore that one day she would be one of those immaculate women who never has lipstick on her teeth…or BBQ sauce on her top. Today, we laughed, was not to be that day and Butcher Grill is no place to worry about such minutia – it is unabashedly about pleasure and abandonment.

In between swiping mouthfuls of the sweet red cabbage slaw that accompanied the Baby Back Ribs I managed to do damage to my own main – the classically over-the-top American breakfast combo of Steak and Eggs(€21). I hesitated when I learned that the steak in question was rib-eye, as chefs are often reluctant to cook this rare due to the fat content. I explained my dilemma to Sergio, who assured me I would get my steak just the way I like it, and he was not lying. Two perfectly plump poached eggs doused in silky bearnaise sat atop a flamed John Stone rib-eye, still quivery within, cooked and seasoned to absolute perfection. I usually know when enough is enough, but this dish had me coming back for more over and over again as it was an unadulterated plate of comfort food where every element was executed expertly. In a word, irresistible. It took numerous breaks, lulls and vain vows that we could eat no more but eventually we managed to both make substantial dents in our mammoth portions, with a mini fork-fight breaking out over the end of my rib-eye, the dish of the day which very nearly defeated us both.

Noticing the glint in my eye upon suggestion of dessert, the lovely waitress Grainne suggested the vanilla cheesecake, which I saw arrive to a neighbouring table looking mighty tempting indeed. However, there was nothing vanilla about the cravings our first two courses had evoked. Something shareable but sinful was most definitely the order of the day and Banana Fritter, Salted Caramel Ice Cream and Cookie Crumbs(€7), even in its title, was exactly that. I’m a big fan of the humble banana in all guises and how else, on this day of utter indulgence, would I have it other than battered. The mental tug of war between ‘I’m horrendously full’ and ‘I need to sample more deliciousness’ is obviously a familiar theme here, as Grainne laughed recognising my ‘save me from myself’ expression. Maria and I were both glad we weren’t saved from ourselves. What looked (perhaps unappealingly) like two plump cocktail sausages were perfectly crisp fritters giving way to a gooey, nectar-like banana which with a scoop of salted caramel ice cream made a most delicious couple, playing together on their bed of crunchy oreo-style cookie crumbs. As we cleaned the plate I was starting to wonder if there was anything Butcher Grill couldn’t knock out of the park.

Full to the gills and mildly shocked at just how much food we had both managed to devour, we went rather merrily (those cocktails though…) on our way, both thinking of when we could pencil in a return visit. Our bill, for two courses each, a shared dessert and two cocktails came to €83, for a fantastic meal that left neither of us wanting on any front.

I left wondering momentarily if I was now a brunch convert…but alas I fear the bar for other brunch establishments may have been set at an unattainable level by Butcher Grill. There is no shortage of places that will serve you up a hunk of meat but there are few places that can keep the craving to return alive – Butcher Grill does exactly this. The Butcher Grill experience, at both dinner and brunch-time, is exactly like a perfectly cooked steak – very rare and bloody brilliant.