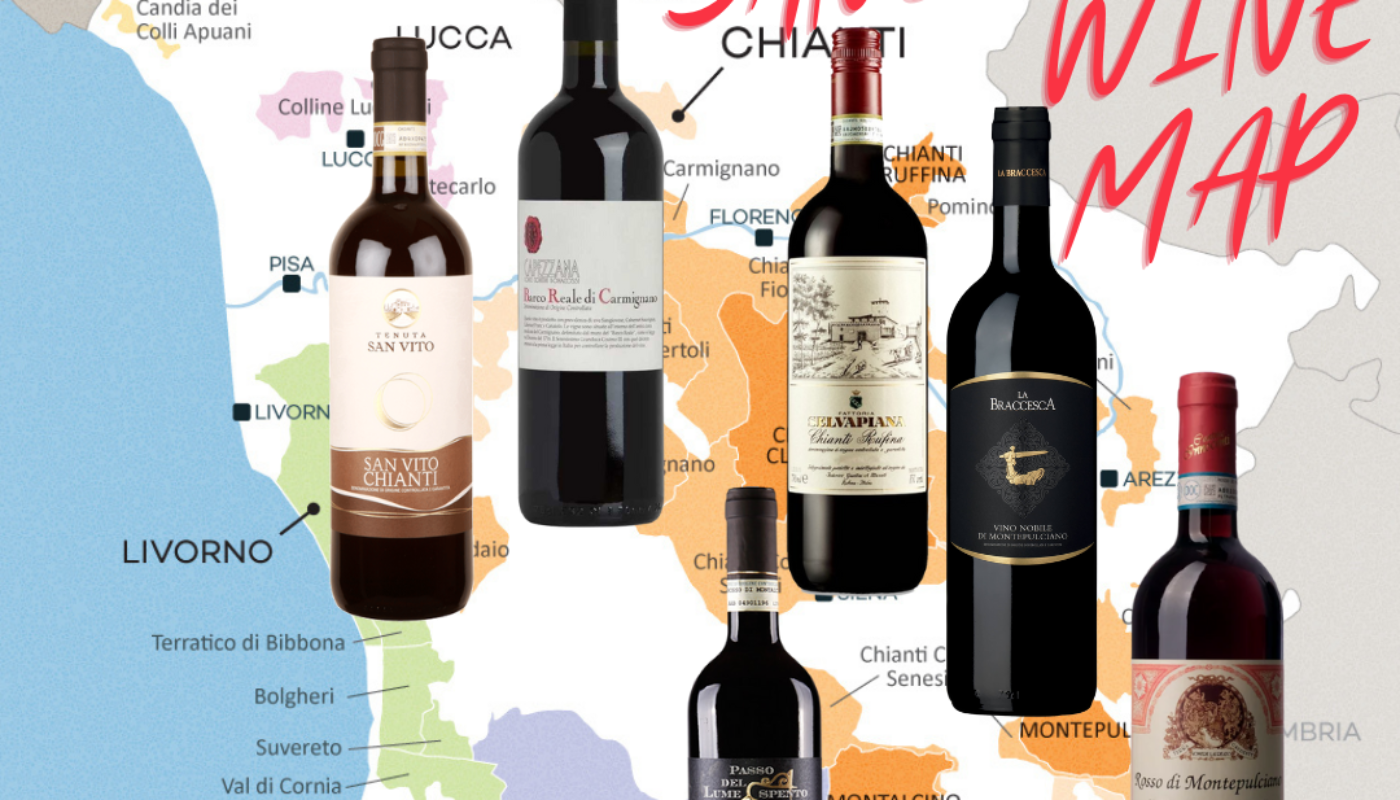 SANGIOVESE is the signature red grape of Tuscany, and the most widely planted red grape variety in Italy full stop. It is nicknamed the blood of Jupiter (or Jove) after the King of the Roman Gods. There are plenty of possible origins to the name, though none conclusive. Named thousands of years ago, it could have been named by monks, as they were frequently those who grew the wine. It’s possible that the name spring from Sangiovannina, referring to a late ripening grape in Sarzana dialect, from the area that forbore Tuscany. San Giovanni is an old town that lays claim to the name.

Typically the abundant flavours are of bright cherry and red fruit and fig, with vegetal character in the form of peppers and tomatoes, with herbs such as oregano and clay, leather and even animal. It is rustic and tart, and it is high in both tannin and acidity. It is super savoury and it makes an incredible food wine matching everything from charcuterie to pizza to pasta and boar & Tuscan style beef Florentine.

The War of the Clones

With a planting trail that runs along the Appenines mountain range (itself known as the backbone of Italy) it proliferates after Romagna until Lazio, centering in the incredible region of Tuscany, though it is found widely further South too. Tuscany features some of the most famous names in Italian wine. There are bright young styles such as Rosso di Montepulciano, to moderately aged styles like Vino Nobile di Montepulciano to the ultra aged, aristicratic Brunello di Montalcino. Like Pinot  Noir is is highly reactive to it’s terroir, leading to sub regional variations. It is late ripening and capable of achieving great complexity and richness. Sangiovese is a chameleon.

“I Ate His Liver
……with some fava beans and a nice Chianti……”
This familiar quote from the Oscar winning film Silence of the Lambs is right up there with the most famous wine quotes in any movie. In the book it was Amarone, but execs changed it to the more familiar term of Chianti to avoid the audience being confused. Far from being simply a chilling quip, Lector is  actually making a joke and a declarative statement to boot! A personality so deranged and disturbed as Dr. Lecter could be treated with a class of anti-depressants known as monoamine oxidase inhibitors, or MAOIs. Three foods to avoid because of possible lethality? Red Wine, beans and liver. It is unlikely that Clarice Starling got this joke but highly likely that Hannibal himself was amused by it. Apparently the iconic hissing noise that accompanied the quote was improvised on the spot by Sir Anthony Hopkins.

Chianti Classico
Chianti Classico is ground zero for Sangio. The Classico zone is the original area of Chianti production. Centered around 6 main villages or sub regions (though a motion has just passed to redraw the map to 11 sub regions), each of these villages creates a different style to the next, much like Barolo or even Burgundy. Above the normal Classico are the upper categories of Riserva and the more recent Gran Selezione.

The black rooster (Gallo Nero) that adorns every bottle is crucial to the development and history of the region. The legend has it that Florentine to the north & Siena to the south were feuding over the division of the territory of Chianti. It was decided once and for all that in order to settle the dispute and establish political and geographic boundaries in the region, each side would have a knight ride by horseback at dawn, and the point at which they met would serve as the border. Each side picked a rooster to wake the riders at dawn. Siena selected a plump and satisfied white rooster, Florence selected an underfed, anxious, black rooster. The Florentine rooster cock-a-doodle-dooed well before its counterpart, giving Florence a huge head start and as a result, the lions share of the territory. The black rooster now adorns the label of every bottle of Chianti Classico.

The wicker/straw baskets that used to house Chianti bottles were called fiascos, and the wine was generally a fiasco. Before the fiasco, bottles could sometimes be sealed with olive oil! The origins of the fiasco are unclear, but the flat bottom of the wicker baskets allowed for the more easily made round bottles, which in turn stacked well. The wine was bang average. Rules of production stated that white grapes had to be used in the blend. As modern bottles started to take hold, Chianti was increasingly associated with fiasco Chianti – light pale and tart. As a reaction against this, the Super Tuscan was born (see Part 2 next week) and people studiously avoided Chianti. The reputation was completely shot.

Redemption & Rebirth
The first step was the elimination of white grapes from the blend. Chianti ‘Classico’ split from the blends) greater Chianti zone and implemented more stringent rules surrounding production (yields etc). International varieties took a back seat and the re-emergence of Canaiolo and Colorino and some other minor indigenous varieties  (many forged ahead with 100 Sangiovese) helped craft a more authentically Tuscan wine. The gallo nero (black rooster) was added to the label of every bottle. The Chianti Classico 2000 project helped bed in a number of established best practices. A new classification Gran Selezione was added above the Chianti Classico and Riserva categories.
Last year there was a further tightening of Gran Selezione regulations as well the decision on the sub-division of the region into 11 villages, similar to the Barolo and Barbaresco model. This has been decades in the making and will result in further illumination of the specific terroirs and characters of different sites throughout the zone.
Chianti Classico’s path to greatness has not been straight forward, from table wine to fiasco, to Super Tuscan, rebirth, to now where it is now; for our money the last bastion of value in the world of fine wine.
Time to fall in love with Sangiovese.

A post shared by Station To Station Wine (@station_to_station_wine)