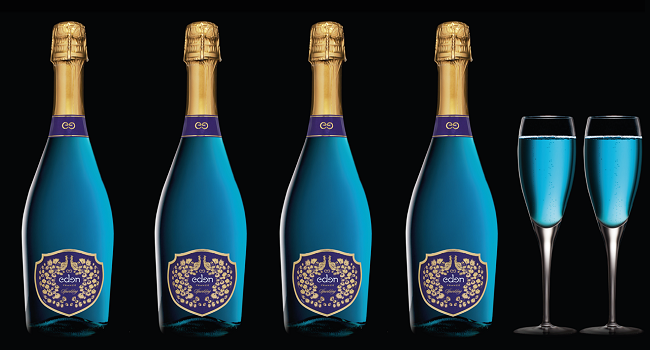 When a group of Spanish entrepreneurs launched a blue wine last year, we knew they were creating a monster. Shortly after, Blue Prosecco became a thing and we’ve seen the odd bottle of sky coloured Moscato and blue Cava making the rounds. Now France has become the latest country to see a wine of this shade, thanks to a company called Eden Sparkling Wine, which has created the country’s first blue bubbly, simply named Eden.

The fizz will be launched in the UK this week at the Frieze Art Fair where over 150 contemporary galleries and renown emerging artists will gather, and as reported by The Drinks Business, its makers claim that it “tastes better than Champagne.”

This French blue sparkling wine is made from Chardonnay grapes, one of the three varieties allowed in Champagne, and it offers a bright turquoise appearance. With an ABV of 12% and a dossage of 38 g/l, it promises to be a sweet and easy to drink glass. Tasting notes are described as “stone fruits with hints of passion fruit.” Eden’s founder, Aymeric V Bruneau, comes from a winemaking background. His great grandfather founded a winery and his and grandfather became a respected vintner.

Aymeric was keen to revive his family heritage and decided that he should combine tradition with modernity to create for a unique wine. It took him five years to develop Eden, and his mission is a bold one: “to offer sparkling wine in a revolutionary way.” They call the new generation of sparkling wine enthusiasts “Edenists” and describe them as “passionate individuals who reimagine celebration and embrace life’s moments.”