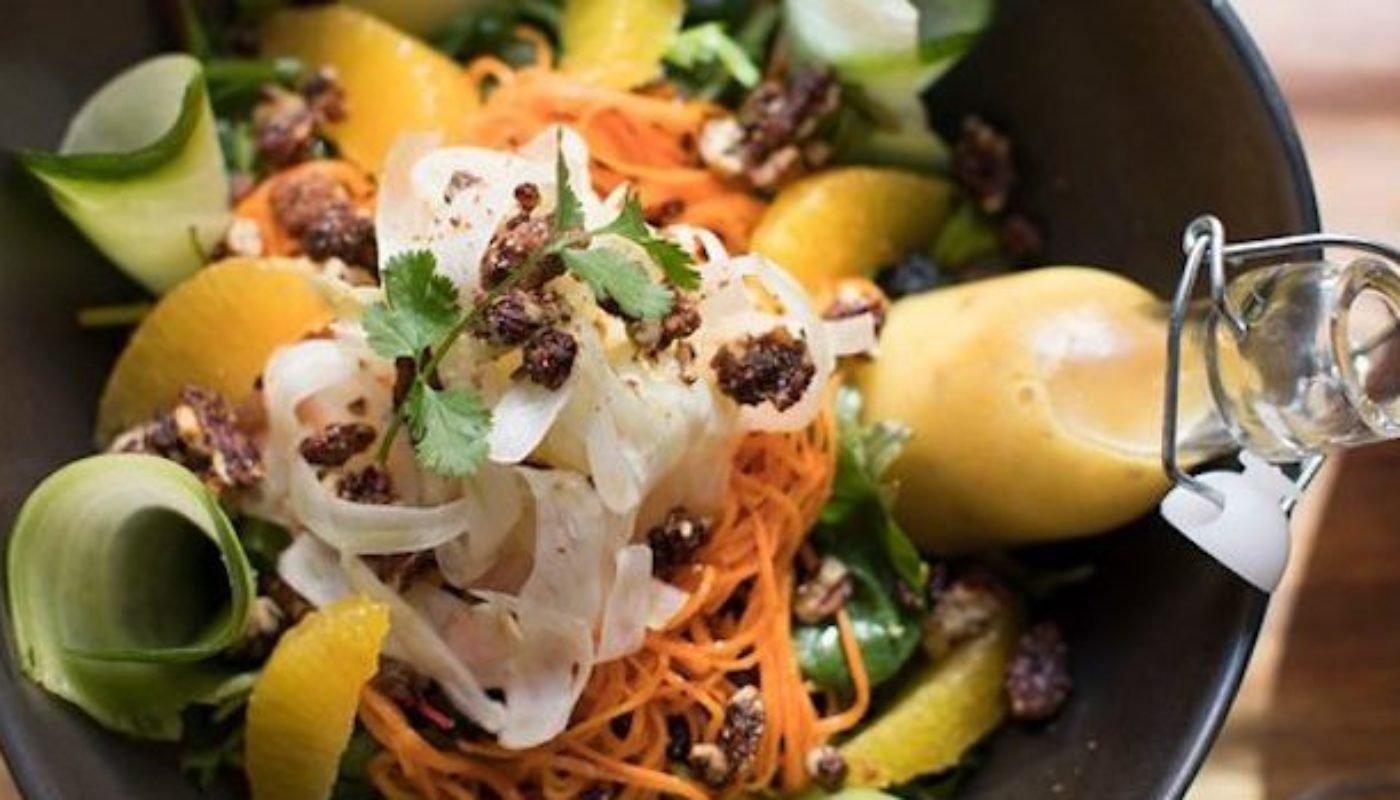 To make the orange dressing
1. Place the orange juice, zest and sugar into a heavy bottom pan and reduce until sticky. Skim off any impurity that comes to the surface.
2. While the reduction is still warm put it in a jug blender on full speed and slowly add the vinegar, water and oil to make an emulsion.
3. Add the zest from four oranges and the juice of two.
4. Fold in the warm crushed coriander seeds. Let rest for at least a day before you use it and do not refrigerate.

To make the pickled carrot strings
Add all ingredients into a small saucepan, bring to the boil and pour over carrot strings. Leave to cool.

To Serve
In a large salad bowl, add all the salad ingredients. Season with salt. Add the coriander, tarragon, pickled carrot strings and walnuts. Add the orange dressing to coat the leaves and a squeeze of lemon juice. Dylan McGrath was born in Dublin and raised in Belfast. He studied in Portrush Catering College and Belfast Institute. He began his first Job in Jurys Inn, Belfast and then left to work in  Roscoffs,  Northern Irelands only Michelin starred restaurant. He also worked at The Commons Restaurant and Peacock Alley with most of his culinary skills being acquired at John  Burton Race in  L’Ortolan and Tom Aikens in Chelsea where he became Head Chef.

Dylan returned home to take up his own Head Chef position in Mint restaurant where he received a Michelin star. People who have worked with Dylan describe him as driven,  ambitious,  determined, innovative and intense. He is known to be incredibly passionate about his work and has been described by food critics as a “creative genius” and an  “incredibly talented chef.”

Dylan opened Rustic Stone in August 2010 that is a casual dining, contemporary restaurant which delivers on the flavours Dylan is so passionate about but without the formality he  previously would have been associated with. From Rustic Stone, the Raw menu has emerged, which was developed by Dylan keeping his ethos on nutrition and flavour to the fore.

To find more about Dylan and his restaurants visit www.dylanmcgrath.com.