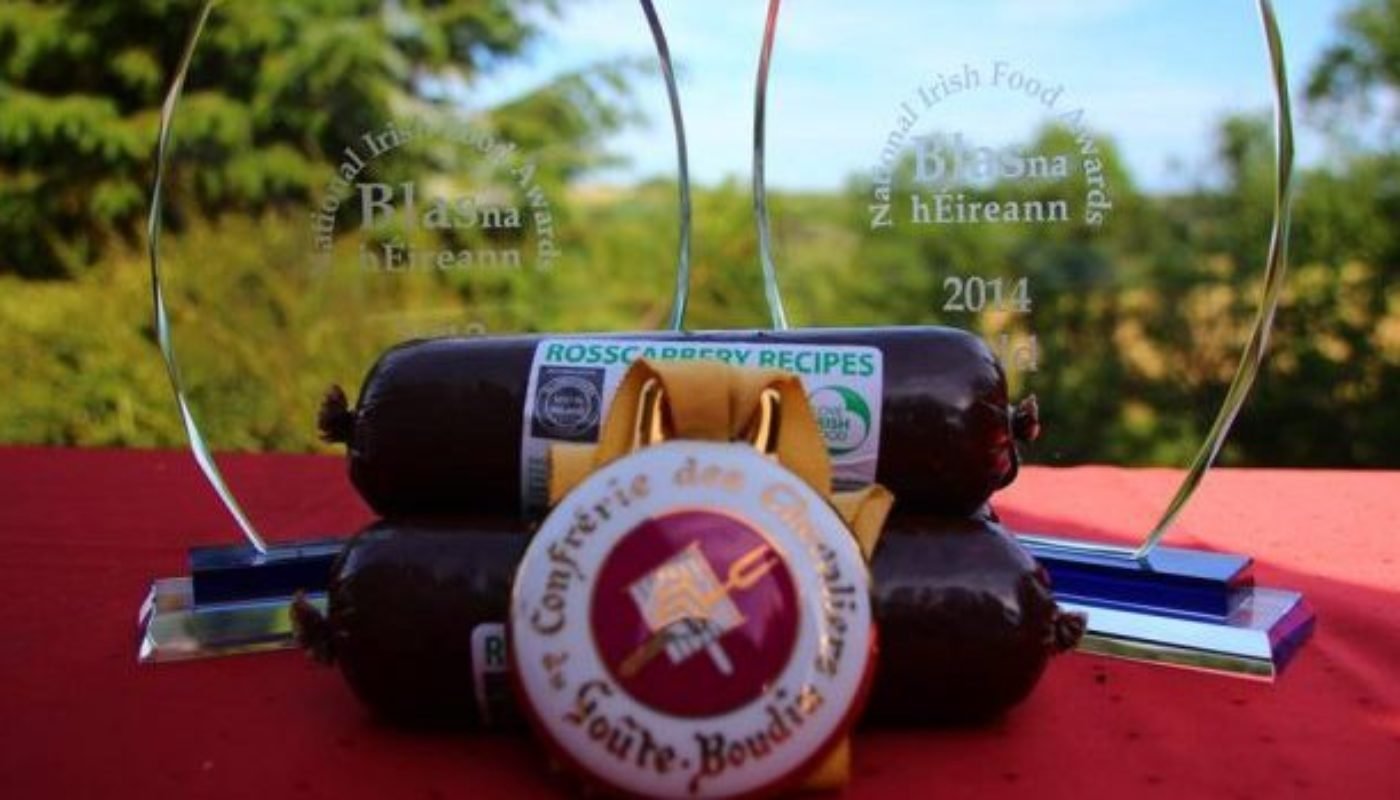 Is it possible to have a Full Irish without black and white pudding? As a huge fan of one of our country’s foremost delicacies, the measure of our national breakfast, for me, is the quality of the pudding and the provenance on the plate. You can travel around Ireland and have a different line up of producers crafting each key ingredient depending on which corner of the isle you find yourself in, as affirmed for me by a recent trip to West Cork where I was lucky enough to get my hands on Rosscarbery black pudding – my first but certainly not my last taste.

As one of so many gifted artisan producers to be found in this most captivating part of the country, I was delighted to chat to Avril Allshire Howe about how Rosscarbery Recipes Black and White Pudding came to be. With Avril, a native of Bandon from a farming family, working in administration and her husband, Willie, owning his own printing business in Carrigaline, an artisan food business wasn’t always on the cards. Moving permanently to West Cork was also off script – the couple bought a holiday home and never really looked back, she explains.

A mix of the perfect climate for livestock to graze outdoors all year long, the West Cork farming ethos of self-sufficiency and a rich history of diverse settlers bringing their own food traditions to the region explains the concentration of West cork artisan food producers, according to Avril and it wasn’t long after moving here that Willie caught the producer bug. What began as a hobby of rearing a free range herd of pigs turned into Caherbeg Free Range Pork Ltd in 1997 and led to Avril and Willie taking over another brand, Rosscarbery Recipes from a local lady who had previously sold sausages under the label. Using locally sourced free range pork, the label began with dry cure rashers before the couple took on the challenge of black and white pudding – no mean feat in the same neck of the woods as Ireland’s most recognisable brand, Clonakilty. The process of development however, was by no means speedy.

Willie read every recipe he could find for black and white pudding, she remembers, and adds “I bought every existing brand and all four of us (William was only 9 and Maurice 7 at the start of the process) tasted each pudding, then the four of us and whoever else happened to be in the vicinity tasted each batch made in the processing unit”, trialling and tweaking until Willie was finally happy with the product in December 2006.

The family weren’t the only ones happy with the final draft, as Avril recalls standing in Benner’s Hotel Dingle for the 2012 Blas na hEireann awards ceremony. “I just stood there when our name was called – totally stunned. You never get used to winning an award, but every year that we have been shortlisted, I have been proud. To be one of 5 shortlisted in the black or white pudding categories is huge as there is so much competition in Ireland”, she says.

The accolades earned by this small business aren’t confined to Irish awards however, as Rosscarbery black and white pudding was the first Irish producer to win a gold medal from La Confrérie des Chevaliers du Goute-Boudiner – Europe’s premier pudding competition. Internationally recognised as outstanding in their field, both Avril and Willie have been intronised into the pudding fraternities which hold festivals for producers in Mortagne au Perche.

The fraternities are interested in quality and tradition and artisan family production and will talk black or white pudding all day long – ingredients, production methods, usage etc. We share their passion

Unsurprisingly, this passion has been soaked up by the couple’s sons. While William and Maurice grew up as chief pudding taste testers and were hands on in the production line from an early age, after completing their Leaving Certificates both boys made the decision make the family business their career. “They achieved the points and turned down the college experience”, Avril says, choosing instead to dive wholeheartedly into the business they helped to build and it is clear that their mother is rightfully filled with pride by her young sons’ determination.

We have always expected the lads to speak their minds when it came to business and they know that the business has to grow – it’s our pension and their future!

One of the most refreshing things about Avril is her willingness to admit that running an artisan business, particularly a family based one, isn’t as idyllic a lifestyle as many of us fantastise it would be.

There is a very rare meal when business doesn’t infiltrate in one form or another, of course, there are arguments; and there are times when I wonder why we started this at all. It can often feel like a case of ‘blood, sweat, tears and frustration’ for them all, Avril admits. Noting that having to wear so many different hats as an artisan producer presents unique challenges, particularly in the field of marketing, Avril is frank in stating that it is very difficult to keep up with the many food businesses which have cropped up in recent years with people with marketing backgrounds at the helm and laments that when it comes to publicity “they’re more than a step ahead of us”.

‘Telling the Story’ has become so important in recent years but I get frustrated when I know that the story bears little or no relation to reality – it’s a case of the story being more important than the product. Our story is straightforward and it’s a warts and all story.

Avril also reminds me that perfecting the product and ensuring it is consistently perfect (by having at least one member of the family on site in the processing unit every day of the year, no less) is only half the battle. “Paperwork is a never ending spectre and staying on top of it is one of the many challenges facing us daily. Owning and working in your own business is always having too much to do.”

The best part of keeping it in the family? “Everyone has the same focus – quality first, business first and everything else falls into place” and it sounds like working towards a common goal makes for a happy family at the end of the day. Reflecting on the enormity of what the family have achieved to date – “two brands, a growing product range, an on-farm business, a varied lifestyle and the fact that our children want to work with us even when the parents frustrate and annoy them”, makes it all worthwhile, she believes.

Both William and Maurice bring energy and enthusiasm to the table, says Avril, noting that “they have high expectations of what they can achieve on a short and long term basis. They have competed beside and against each other in sport and know their each other’s strengths and weaknesses.”

It would seem their strengths are present in abundance, with William having been one of the youngest producers to ever attend SuperValu Food Academy and bringing the lessons he learned here back to the business and Maurice is working on a new product he aims to launch before the end of the summer.”Both of them are constantly looking at new opportunities which can be incorporated into our current business,” she says.

Having loved their Gluten-Free Black Pudding when I tasted recently, it seems I have William & Maurice to thank for a move in this direction, as Avril credits it to both boys having a keen interested in sport, keeping fit and eating well.

This meticulous approach paid off when both started collecting awards like the original. ” Our Gluten Free White Pudding won Best New Product in the Meat, Paté & Seafood category in Listowel Food Fair, 2016, and this March, the Rosscarbery Gluten Free Black Pudding is the only Irish product to receive any medal in France – Gold!” Avril beams.

As someone who has been there, done that and continues to do it well, I ask Avril for advice she would you give to someone hoping to establish their own artisan food company and her answer is as frank and honest as I have come to expect. You must ask yourself, she advises, a series of important questions – “what is your real ambition? Is it making a quick buck or do you have a passion for the product?Are you prepared to work the hours? Where do you want to be in 12 months, 2 years and 5 years?”

As for their own five year plan, Avril is adamant that they will continue as an artisan producing family but notes that their facility has plenty of room to scale up and “is suitable for exporting product and we plan to continue to diversify as we identify market opportunities.” “Willie & I look to William and Maurice to make their mark on the direction we take in the future”, she says, with full faith in her boys to drive the business forward.

It would seem that Rosscarbery pudding has established itself as one of the best in the Kerry and Cork market, with five star luxury properties like Hayfield Manor, Castlemartyr Resort and the Europe Hotel in Killarney all making it their pudding of choice for the all-important hotel breakfast experience. Proving its versatility, it also appears on menus in Fishy Fishy Restaurant and Finn’s Table in Kinsale, Fenn’s Quay and Cork City hotspot Liberty Grill exclusively uses Rosscarbery Gluten Free Black Pudding for their must-try Black Pudding Hollandaise Eggs.

While Avril clarifies that being a part of Food Academy does not mean your product is stocked in SuperValu stores nationwide, as each is independently owned, their products can be found in Super Valu Mount Merrion and in Thomas’ of Foxrock in this neck of the woods. She also lets me in on a number of independent outlets offering us the opportunity to get our fix outside without venturing to the Kingdom or Rebel territory – Ardkeen Stores in Waterford, Avoca stores in Dublin and Wicklow, the Country Market in Howth, Nolan’s of Clontarf and Thyme Out in Dalkey. When asked how their black pudding competes with West Cork black pudding giants Clonakilty, Avril’s answer sums up the entire ethos of Rosscarbery recipes perfectly. “We don’t. Willie & I have huge respect for Colette Twomey & her team; she and her late husband, Eddie, put Clonakilty on the map and her new factory will be a huge benefit in the region for employment. We are on a vastly different level and our products are made by our family not a factory.”

Avril and her family have a genuine, all-encompassing passion for their product and a drive to succeed and I wholeheartedly believe they will continue to thrive. Don’t take my word for it though – the proof is in the pudding.