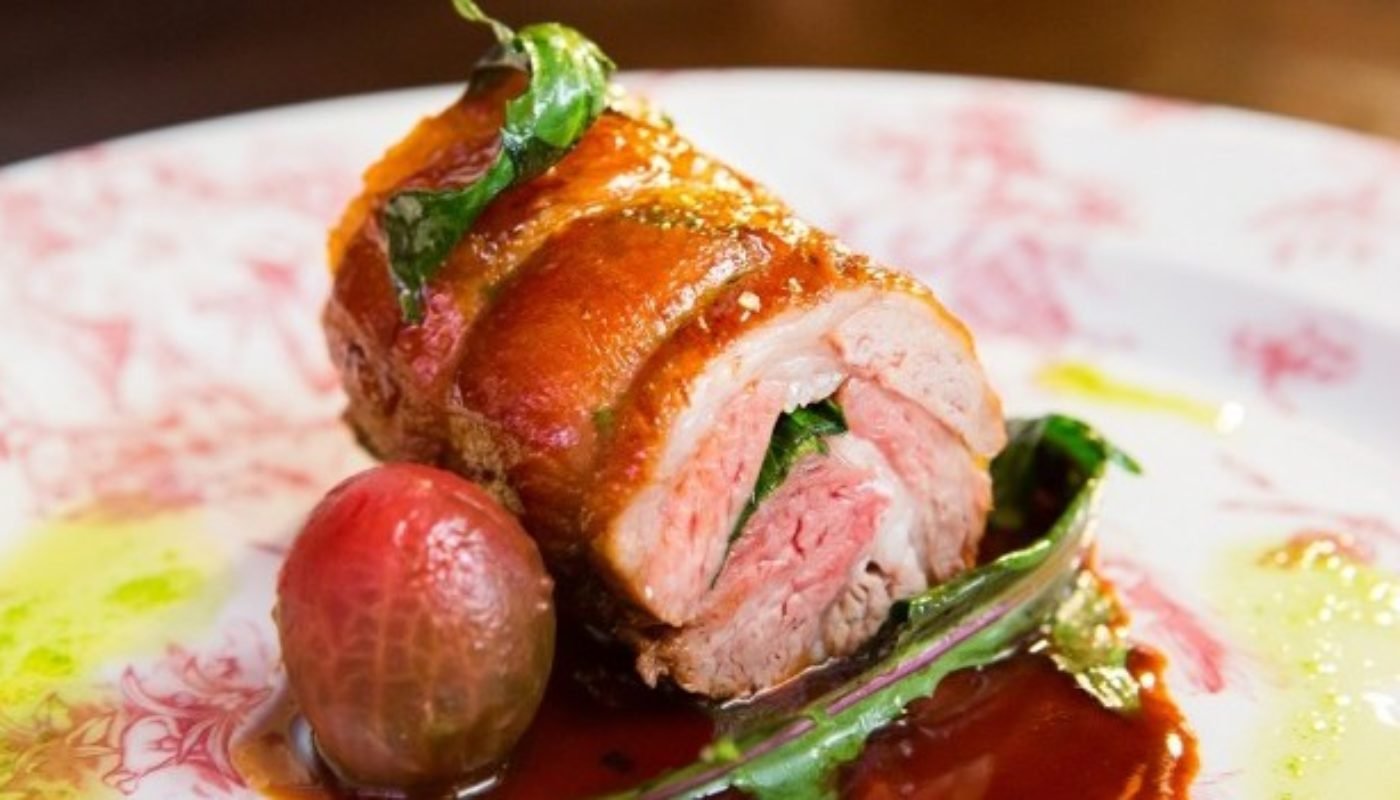 Noisette of Lamb in this red ale jus is one of our family favourites, loin of lamb wrapped in a thin layer of fat and sliced into medallions, with a drizzle of lovely ale jus. You could wrap the loin of lamb in some bacon or pancetta too for extra flavour. I use Dunbrody Red Ale from our Craft Brewery here on the grounds of Dunbrody to make the jus, it works really well with the lamb, but red wine jus works well too!

1. Debone and trim the lamb racks or loin. Leave the loin with a fine layer of firm white fat around the eye meat.
2. Place a few leaves of wild garlic in the center then secure the lamb with kitchen twine and divide into noisettes or portions.
3. Place in a bowl with 3 of the chopped sprigs rosemary, the thyme, garlic, lemon zest and a drizzle of olive oil.
4. Bring to boil a small pot of water and prepare a bowl of ice water too. Plunge the tomatoes for 20 seconds until they begin to peel off then transfer immediately into the ice water bowl. Peel the cherry tomato and keep aside.
5. Preheat the oven to 200˚C.
6. Place the potatoes into a saucepan of lightly salted water. Bring to the boil and simmer for 18–20 minutes until softened.
7. Drain the potatoes, then transfer on a baking tray, crush the potatoes with a potato masher. Melt 70g of butter with the rosemary in a small pan and drizzle over the crushed potatoes. Pop into the oven for 10–15 minutes until slightly crisp on top.
8. In the meantime, heat an ovenproof frying pan and caramelise the lamb on all sides, about 5 minutes. Season well with salt and pepper.
9. Transfer the pan with the lamb and garlic to the oven. Roast about 10 minutes or until cooked pink in the center. Remove the lamb noisettes from the pan onto a board and cover with foil to rest.
10. Drain excess fat from the lamb’s frying pan. Over a medium heat, add the red ale and reduce by two thirds.
11. Add stock and rosemary and reduce until it coats the back of a spoon. Strain through a sieve. 12. Add 30g of butter and the tomato and swirl the butter into the sauce until glossy and warm.
13. Serve the noisettes of lamb with a drizzle of jus, a warm tomato and the potato. Kevin Dundon is the Chef/Proprietor of Dunbrody Country House Hotel & Restaurant. Dunbrody was established in 1997 by Kevin and his wife Catherine. It is now considered to be one of Ireland’s leading country houses and was recently named Best Luxury Country House in the world. Kevin also runs a cookery school at Dunbrody which is one of the most respected in the country. Kevin is also Chef/Patron of the Irish Gastro Pub Raglan Road in Disneyland, Florida.

Over the past few years Kevin has appeared on numerous TV channels including ESPN Cable, CBC Canada, UKTV Great Food, BBC1’s Saturday Kitchen and RTE’s the Today Show. More recently he appeared live on the NBC Today show on St. Patrick’s Day while in New York representing Irish food. His prime time cookery show Modern Irish Food with Kevin Dundon aired on both RTE1 Ireland and PBS in the US and was nominated for three American Taste TV awards, the highest awards for the Lifestyle Entertainment Industry.

Kevin has also published 5 books: Full on Irish, Great Family Food, Recipes that Work, Modern Irish Food, and Back to Basics with Kevin Dundon. His latest venture is Arthurstown Brewing, of which Kevin is a director and shareholder. Kevin believes in pairing fine food with the best craft beers.