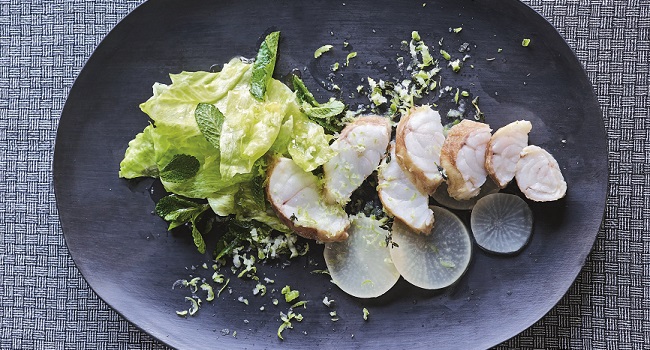 This Monkfish Tail Recipe is one to try when you are feeling creative. Monkfish is one of the most fantastic things, both to eat and cook. It’s meaty and very versatile; I almost treat it like meat. Roasting it on the bone gives it a natural feel.

Serving it with cider, turnips and buttered lettuce really lifts it, but the showstopper (which will make you look like a right smart arse) is grating the frozen – yep, frozen – apple over the top of the dish at the table.

1. Preheat the oven to 180°C/gas mark 4.
2. Heat the oil in a large flameproof casserole dish. Add the monkfish and cook until coloured on both sides.
3. Add the bay leaf, thyme, garlic and stock.
4. Place the dish in the oven for 15 minutes, or until the monkfish is cooked through.
5. While the monkfish is cooking, bring the cider to a simmer in a saucepan.
6. Add the turnip and sage leaves and cook for 2–4 minutes minutes until the turnips are tender but not too soft.
7. Put the lettuce and mint leaves in a bowl.
8. Remove the casserole dish from the oven and lift the monkfish out onto a plate. Add a squeeze of lemon juice and leave to rest.
9. Add the butter to the casserole dish to deglaze, scraping up all the sediment with a wooden spoon, but don’t cook the butter.
10. Pour the warm buttery juices over the lettuce and mint. Cover the bowl with clingfilm and give it a shake.
11. Using a sharp knife, cut against the bone all the way down either side of each monkfish tail to give two long fillets.
12. To serve, divide the turnips evenly between four plates and season with black pepper. Place a monkfish fillet on each plate on top of the turnip discs.
13. Spoon the turnip cooking juices over the fish. Transfer the lettuce and mint to a serving bowl. Just before serving, grate the frozen apple over the monkfish and turnips – do this at the table as a showpiece! Glynn Purnell was awarded a Michelin Star whilst Head Chef at Jessica’s, in turn giving Birmingham its first ever Michelin star. He now runs Purnell’s and Purnell’s Bistro. He regularly appears on BBC1’s Saturday Kitchen and has also featured on The Great British Food Revival. Following the success of Glynn’s first book, Cracking Yolks and Pig Tales, his second book is described as ‘rustic home cooking with an eclectic twist’, and is perfect for anyone who wants to get creative in the kitchen.

Rib Ticklers & Choux-ins by Glynn Purnell is published by Kyle Books and is available to buy on Amazon.