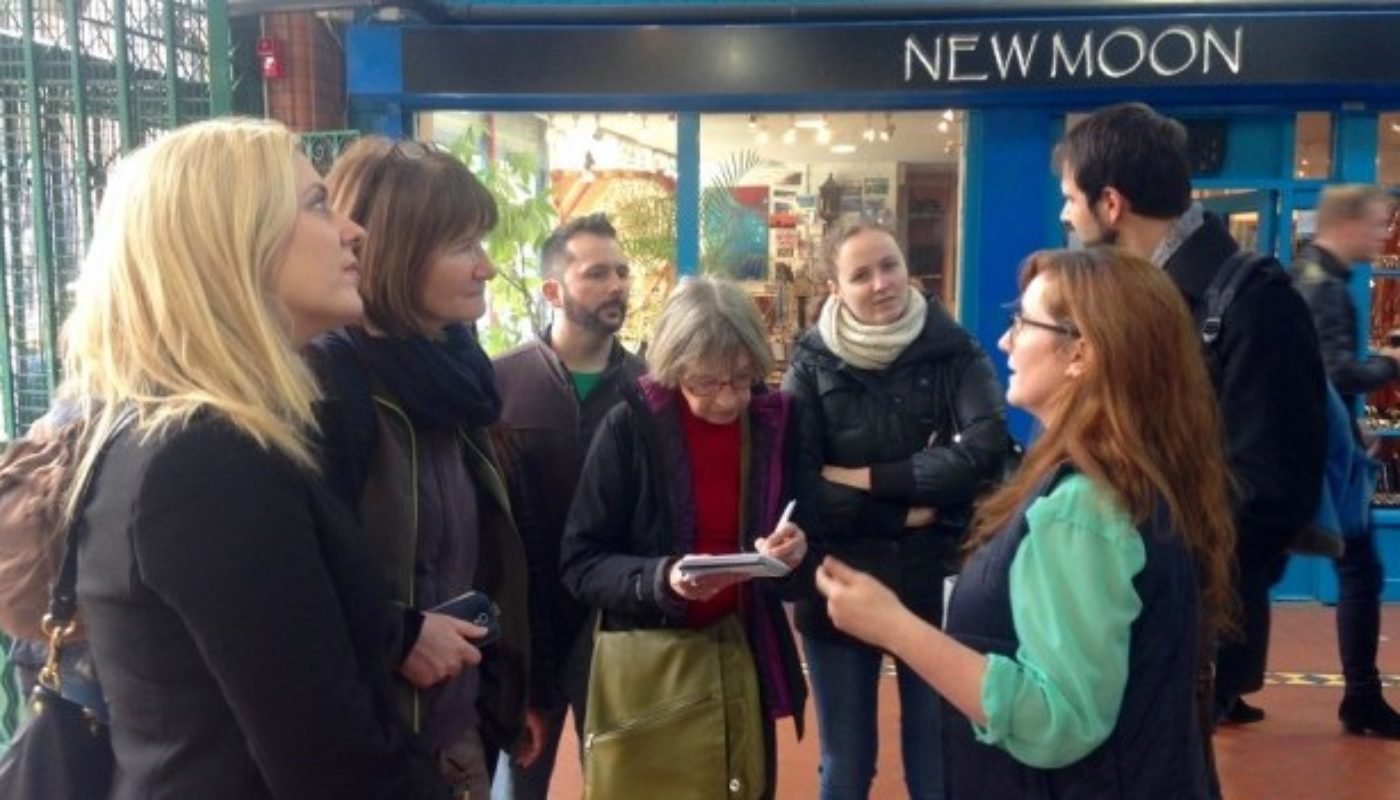 If you’ve ever had to entertain friends from foreign lands you might have experienced what it’s like to be a tourist in your own city. I have had the pleasure of several Viking splash tours over the last few years and should probably have a Gold Card for the Guinness Storehouse by now but I had never taken part in a food trail until quite recently. That might sound surprising for a foodie in Dublin but I had always discounted them as being designed for tourists and thought they wouldn’t appeal to locals like me who can pop along to any of the stops whenever I fancy.

Fab Food Trails is an award winning company that host walks in Cork and Dublin with experienced local guides. Groups are limited for optimum enjoyment so our little gang of eight met on Dawson Street on a sunny Saturday. Our guide for the day was prolific food writer Aoife McElwaine and straight away it was obvious we were in experienced hands. She began by giving us an overview of how Ireland’s food culture has developed from 11th century monks making cheese right up to Celtic Tiger immigration and the influences other cultures have had on our food scene.

With that in mind we began our trail with a taste of Italy at Dolce Sicily on Dawson Street. Situated in the basement of the Design House, the little café serves up authentic paninis, cakes and pastries which is where we started. Our Pistachio Beignets were filled with a smooth pistachio cream and they were devoured with espressos as our charming server gave us an insight to Italian cuisine in Ireland.

Our next destination wasn’t too far away, Sheridan’s Cheesemongers on South Anne Street. A popular shop for Dublin foodies, it was nice to hear from Dominique about the cheese industry in Ireland and be able to ask all our questions. We sampled a lovely Gouda-style Coola from Macroom and a washed rind cheese from Milleens in West Cork.

As hard as it was to drag ourselves away, our next stop was Sprout & Co., also on Dawson Street. It was great that the tour highlighted the healthy eating movement that is rapidly taking over Dublin and where better to visit than a place that takes local, seasonal produce so seriously. We got to sample a few of their cold pressed juices and smoothies (the Sweetgreen is unbelievable) and a gorgeous salad with guacamole, squash, pomegranate and quinoa. I wouldn’t usually be frequenting healthy eateries but I was seriously impressed.

A short walk later we stepped out on to the gallery of the Powerscourt Town Centre where we were treated to Burren Smokehouse Smoked Salmon Bagels from the PepperPot Café. The authentic bagels are handmade each day by the team and are so good they don’t need toasting. We munched away happily while being illuminated about the history of the centre which was used for parties by the 3rd Viscount Powerscourt during parliament season.

Next we strolled up through the Creative Quarter to The Swan on Aungier Street to warm our hearts with a 12 year old Powers Whiskey. Barman Dave informed us that the pub is one of only 12 authentic Victorian pubs left in Dublin and was used as a look out during the rising. The name stems from a time where most people couldn’t read or write so pubs would use animals for their insignias. I’ve visited The Swan on a couple of occasions but I had no idea it had such an interesting story.

After our whiskey we visited the George’s Street Arcade for a cure in the form of a Savage Roll from Lolly & Cooks. Like a sausage roll only better, their Savage Rolls are meaty, juicy and come in different flavours: original, cranberry and rosemary & garlic. The rolls have gained almost a cult status for hungry Dubliners but the stall also overs lunchtime staples and stunning cupcakes.

A few steps around the corner we found ourselves in the chocolate Mecca that is Cocoa Atelier. As we had a taste of the bestselling Salted Caramel & Dark Chocolate we were shown all the current seasonal flavours and limited edition treats. They will cave in to public demand and keep producing or bring back your favourites which is why they still have their colourful Olympic themed chocolates.

Another little walk took us to the last stop on our trail, the Temple Bar Food Market. Aoife gave us a bit of background on the market and allowed us to wander a bit before we sat down to enjoy some oysters. With a glass of wine in hand, most of the group got stuck in and tried the Clarenbridge Oysters. This is what a food trail is all about, they weren’t everybody’s cup of tea but a great foodie experience for the adventurous trailers.

The Fab Food Trails change all the time and your route will depend on your particular guide but most tours will hit around seven or eight stops like we did. Throughout the tour Aoife pointed out other places of interest and really catered to the tourists in the group with recommendations like Grogan’s for the best pint of Guinness in Dublin.

Her in depth knowledge of the food scene in Dublin really added to the tour and everybody, including the locals, made some great discoveries. I wish I could recount all the historical and cultural details for you but that would spoil the surprise. You’ll have to go on a Fab Food Trail yourself and rediscover your city through its food.