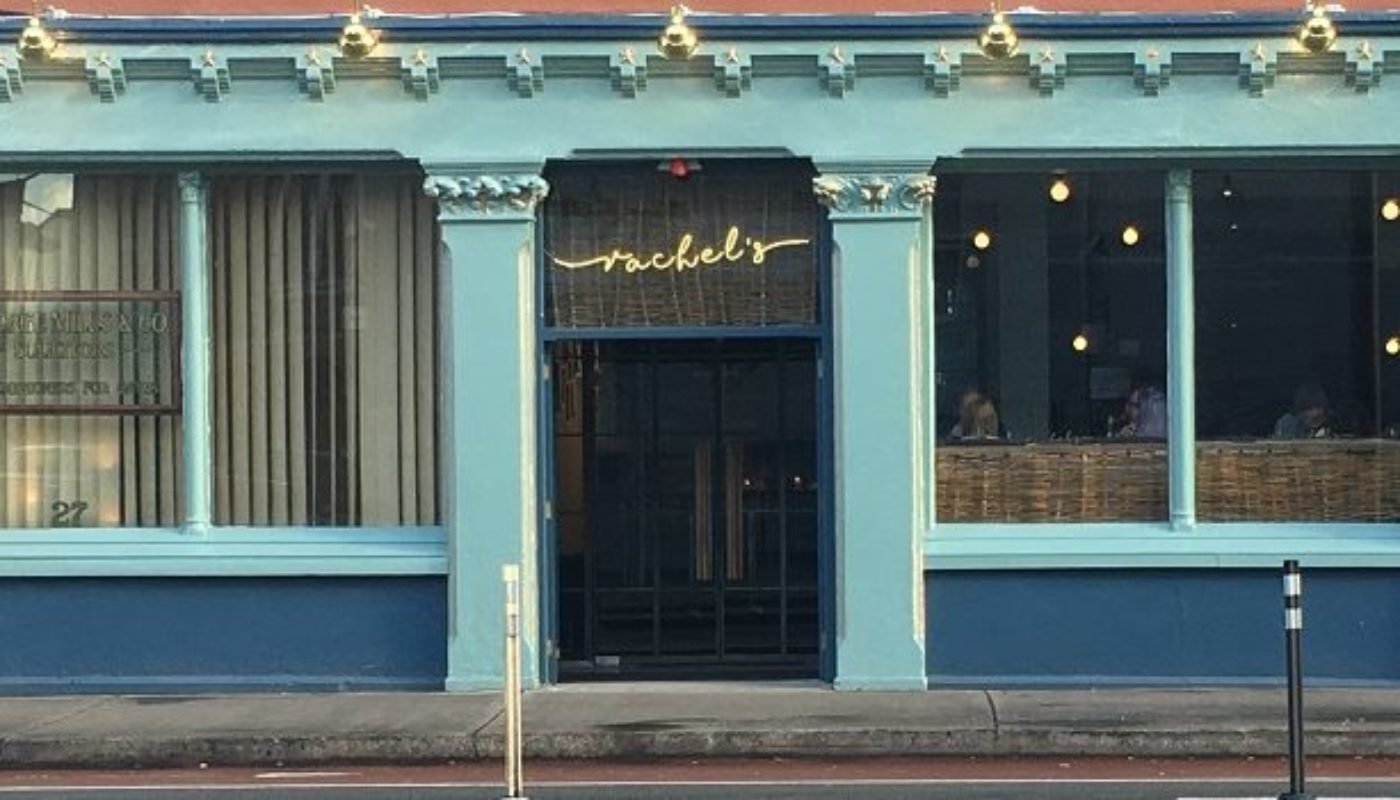 The media buzz around the opening of Rachel Allen’s first ever restaurant venture, Rachel’s, in Cork City could not have been missed. For many, it came as a surprise. Why Cork and not Dublin? For others, it was seen as a boon for Cork; a vote of confidence in the City’s voracious dining out scene. Rachel herself was grand marshal for Cork’s St Patricks’ Day Parade just ahead of the restaurants opening. It seemed as though the entire city put its support behind the venture. But what of it since?

There was a time not that long ago when Washington Street was an unloved part of the city. But gentrification arrives everywhere eventually, and with great restaurants opening up along here nestled beside long standing Cork traditions such as Café Paradiso, Fenn’s Quay and the much loved Liberty Grill, the street has been given a new lease of life that was sorely needed for many years.

To answer the question of why Cork and not Dublin is easy. Cork’s reputation as the Food Capital of Ireland just keeps growing. Whilst Cork County had the highest concentration of artisan food producers, the restaurant scene was not always up to the same speed.

Thankfully, this imbalance is being addressed, and Rachel’s is doing its part in doing just that – the menu is 100% producer led. The influence of Ballymaloe as a centre for farm to fork cookery is evident on the menu also, so it makes sense being close by to reduce those all-important food miles as well as maintaining the freshness and vibrancy of the ingredients being used.

The décor of the restaurant is attractive. It’s lofty and spacious with high ceilings and bare brick walls against crisp lines, exposed industrial air vents and cage lights sit alongside tables dressed with stark white linens. A less than subtle nod to the agricultural leanings of the menu is made with an enormous pitch fork along one of the walls. The restaurant is to the front and there is a large bar at the rear – separate entrance, separate vibe. It’s a place of contrast: old and new; art and artisan; formal yet relaxed. If anyone has had the privilege of dining at Ballymaloe House, you will know that the service you receive is of the highest standard: attentive, friendly and knowledgeable about the menu. Those traits are replicated in Rachel’s in spades.

Settling in for the evening, little did I know when I ordered the Shell Rum (a magical mix of Havana 3 Rum, Mead, Dillisk Syrup and Red Ale) that it would be served to me in a conch shell. Yes it’s fun, but did it add anything to the drink itself? I’d say not, after the first sip channeling my inner pirate as best I could. That said, the cocktail itself was very subtle and oozy with honey mead – utterly moreish, like all good cocktails should be. The menu reads incredibly well, and from a starters point of view there is plenty of choice for vegetarians – four in fact if the soup of the day is veggie; compared with just one on the mains menu. For pescatarians, the fish choices are plentiful. For the carnivore, you are spoiled for choice.

For starters, I chose the Oven Fired Ale & Caraway Flatbread with Slow Cooked Lamb, Pomegranate, Pickled Red Cabbage and Tzatziki; my dining partner chose the Market Fish Ceviche (which on this day was plaice) with lime, garlic and garden herbs. I love lamb, and caraway is, in my opinion, one of the most underappreciated spices, so imagine my delight at seeing them paired together. Presentation was almost street food style were it not for the shining white china plate; the flatbread was a little denser than I was expecting, the caraway was present yet not overwhelming. The lamb was pulled and dressed in an unctuous sauce using the meat cooking juices.

Pickled red cabbage helped to cut through the meat’s richness, and pea shoots made their first appearance of the night. Tzatziki and sumac completed a dish pairing the best of Irish ingredients in a Levant dish that was almost perfect except for a slight heavy handedness of salt.

The ceviche on the other hand was a delight from start to finish. Citrus flavours of the ceviche dressing danced around my tongue with impeccable balance and lightness of touch. The sweetness of avocado and tomato were excellent counterpoints and the elegant jumble of fresh herbs (mint, pea shoots and coriander) lifted the whole dish further. Next up, my dining partner ordered the 28-Day Aged Sirloin Steak – medium rare, and cooked just about perfectly with a good level are charcoal giving colour and extra depth of flavour. It melted in the mouth; the aging providing extra depth of flavour that comes from allowing the meat to hang and mature slowly. It was served simply with a generous pile of deep fried crispy shoestring onions and a tomato concasse that helped to provide much needed acidity and sweetness to contrast the rich heavy meat.

But the choice of béarnaise turned out to be inspired. A silky smooth, creamy béarnaise that was ebullient with a subtle hum of aniseed from fresh tarragon was almost good enough to outshine the steak. I can’t imagine that the herb butter or pepper sauce would have been as good a supporting partner to the steak as this beautifully made béarnaise. I couldn’t resist the summery sounding Asparagus, Pea and Mint Risotto. I’ll admit, my standards are high when it comes to risotto – it’s one of the things I enjoy cooking at home. Happily, I can report that this risotto was a winner in many ways. Firstly, the flavour of peas. Sounds like such a silly thing, but peas can so often be disappointing and lacking in flavour and texture. Here, the pea flavour was redolent – singing to me from the plate.

The asparagus were perfectly cooked, but not overpowering the fresh pea flavour; and there was a delightful ping of citrus from lemon and also the Knockalara sheep’s cheese that was sprinkled on top. The toasted pine nuts and parsnip crisps added a much needed additional texture dimension. The texture of the risotto was perfect, but it was, for a vegetable dish, very rich indeed. Maybe I wasn’t helped by the generous portion of my lamb starter, but I struggled to finish it. Along with the main courses came three sides: chips, potatoes dressed with butter and mint and a side salad, which for such a small pot, was unexpectedly wonderful. Hidden amongst fresh mustard and rocket leaves were fine slices of fennel, radish and lightly pickled slithers of celery. A triumph of a side salad – one that I would have happily eaten all day long. After such a hearty meal we were sadly unable to squeeze in a pudding but reflected on our meal, agreeing that Rachel’s is a restaurant that has taken the building blocks of traditional Irish food and elevated it to something that is more modern. At the same time, it aims to respond to the want of diners for a less reverential fine dining experience than you would get at the Big House, with the same incredible produce dotted throughout the menu.

There are very talented people working here, chefs and front of house alike. The commitment to using local and seasonal ingredients and the kudos of access to produce from one of the most famous kitchen-gardens in the whole of Ireland, Ballymaloe, is admirable and this shines through in every dish.

Rachel’s is already proving popular – it was packed by 6pm and the atmosphere is spot on. Ingredients are top quality, the cooking is sound and service is perfect. Our bill, for two starters, two main courses (which included sides), one glass of wine, a cocktail and a pot of herbal tea came to €101. Kate Ryan is an established food blogger and writer at Flavour.ie. Her blog is recipe driven showcasing the best of West Cork produce and encouraging everyday cooking with it at home. She has an established and growing social media audience that is global. Kate is also a judge with Blas na hEireann and the Irish Quality Food Awards. As well as writing, Flavour.ie also has created an original Clonakilty Walking Food Tour.