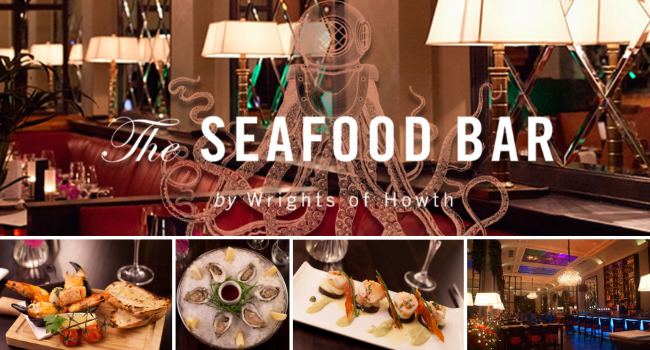 35 Dawson Street has seen many changes in its time and we’re sure if the walls could talk there would be some serious skeletons in the cupboards given some of the controversial chefs, such as Conrad Gallagher, which have all tried and sadly failed to make a success out of what is undoubtedly one of the most gorgeous dining rooms in Dublin. The prettiness matched only by the vastness, which is where the challenge will lie to keep this vessel afloat.

That said since opening last month, on a street full of stiff competition, the venue has been packed out. We stopped by last Saturday to an almost full house, pretty impressive considering the amount of covers it can hold. Having previously dined in the former Dawson Brasserie which was the old incarnation we were familiar with the location but one of the biggest challenges of stumbling across The Seafood Bar on Dawson St. is the lack of frontage. This and the fact the long walk way to the dining room feels like there is quite a disconnect. However it has to be said The Wright’s group only opened 3 weeks before Christmas so there are big plans for this space with the possible addition of another bar to the front. 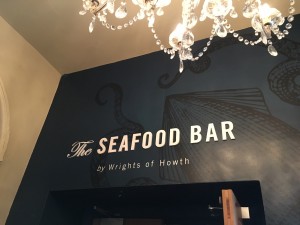 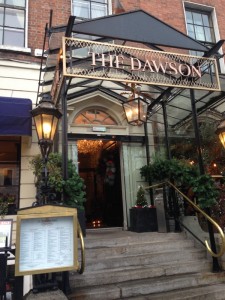 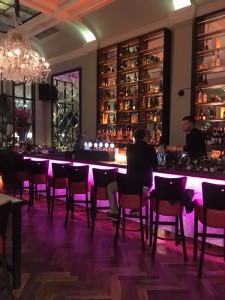 We were pleasantly surprised to see Mark Wright has hired one of the most experienced restaurant managers in the business, Martina Fox. No stranger to taking on big projects, Martina has a graciousness and charm that much like Declan Maxwell from Luna is infectious but she is also meticulous in working the room and making sure every diner is having a good night. Even with a new team it is clear to see given time this flawless approach should soon be second nature to all on board.

The layout and design hasn’t changed too much apart for the addition of the Funky Fish Cocktail Bar to the rear of the room, new smoked oak flooring and some revised colour schemes giving the room a more glamorous feel. The change to red leather seating lends itself to the feeling that this is not just a restaurant but a venue, something which the Wright group know a thing or two about. This is a big departure from what has been done here in the past and with the atmosphere we witnessed on Saturday, thanks to a little help from DJ Eamonn Barrett and his cracking tunes there is no doubt The Seafood Bar will be putting it up to its popular neighbors 37 Dawson St and Sams. One change we were glad to see that hasn’t been made is to the generous spacing between diners, finally somewhere not maximizing every sq inch just for the sake of fitting in a couple of extra covers! Another thing we think we go down well with diners is the wine list, long a bone of contention for almost every spot on the street with most venue’s entry wine starting at around €29, The Seafood bar have kept to their mantra of “affordable style” and you can pick up a pretty decent Colombard for €24.95 or a Cote De Duras Merlot for €25.95, this along with the fact the list is well chosen we liked a lot.

As the name would suggest seafood weighs heavily on the menu, as it should, classic dishes like chowder (€6.95), crab mornay (€24.95) and seafood linguine (€18.95) make an appearance but meat lovers are not forgotten with the option of wild Irish game of the day and several chargrilled Angus Irish beef cuts. We however stuck the the nautical theme and kicked off with the sizzling Gambas Pil Pil (€9.95) which were smothered in a zingy lemon chilli & garlic butter dressing that was mopped up swiftly with a large slab of chargrilled country loaf. Wrights are famed for the quality of their Smoked Salmon (€9.95) which they have been smoking since 1893 and priced at under a tenner, this was an obvious second choice for us. Lashings of beautiful fresh salmon made up the majority of the dish, when something tastes this good only subtle accompaniments are needed. Dill Cream, caper berries,  peppery rocket and a humble piece of  homemade brown bread all made perfect partners. With over thirteen mains to chose from narrowing it down to two was a bit of a dilemma, in the end the Pan Fried Monkfish Medallions (€27.95) made the cut. Three perfectly cooked meaty medallions, expertly seasoned took centre stage, topped with three plump gambas, the team had transformed this ugly beast into a seriously tasty bite, the crushed baby potato, saffron cream and asparagus were simply the icing on the cake.

To us scallops cooked well are one of our favourite things to eat and The Seafood Bar have created a praiseworthy plate in their offering. Pan Seared Scallops (€27.95) with black pudding, always a safe pairing and as with each of the dishes we sampled, generously portioned too. However it was the exquisite parsnip mash and crispy pancetta which gave the dish an extra depth of flavour which we both loved. They say good eating deserves good drinking and with that in mind we treated ourselves to a well matched  bottle of Domaine Thibert Bourgogne Chardonnay 2014 (€38.95) which as it turned out was not only well matched but well priced. 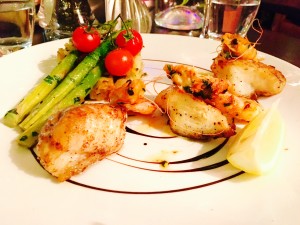 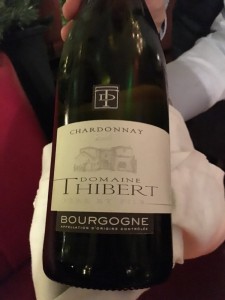 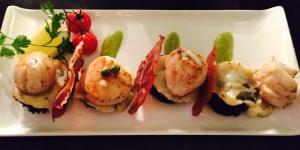 For such a fresh team we were impressed by our server on the night Julia, who was not only well prepped on the menu, which let’s be honest is essential but often overlooked but also because she had a refreshing ease and genuine interest in enhancing our evening – simple hospitality done right. No doubt a trait being honed with the influence of Martinia Fox who makes it look so seemless.

After paying our bill which came to €116.75 including a large bottle of sparkling water,  we popped down behind the sexy red drapes to seek out a little nightcap in The Funky Fish Cocktail Club with a Black Cherry Chocolate, house-infused black cherry vodka, white chocolate liquor and black cherry juice. Basically a boozy black forest Gateaux in a flirty champagne flute, what is not to like? In keeping with the decor we also sipped a classic speakeasy Whiskey Sour to finish off our evening. 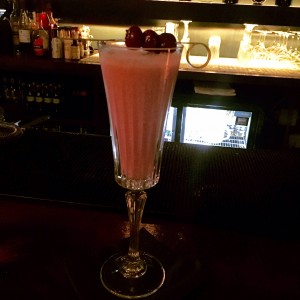 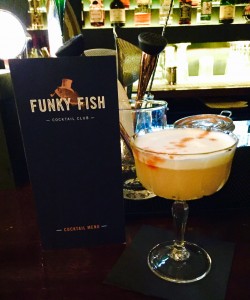 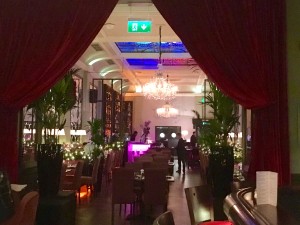 Although this is a notoriously hard room to crack, The Seafood Bar has all the right ingredients to shake things up a little on Dawson Street, well cooked food at affordable prices, good service and great cocktails in a well appointed setting. Watch this space.

This is a Fresh Taste we highly recommend.