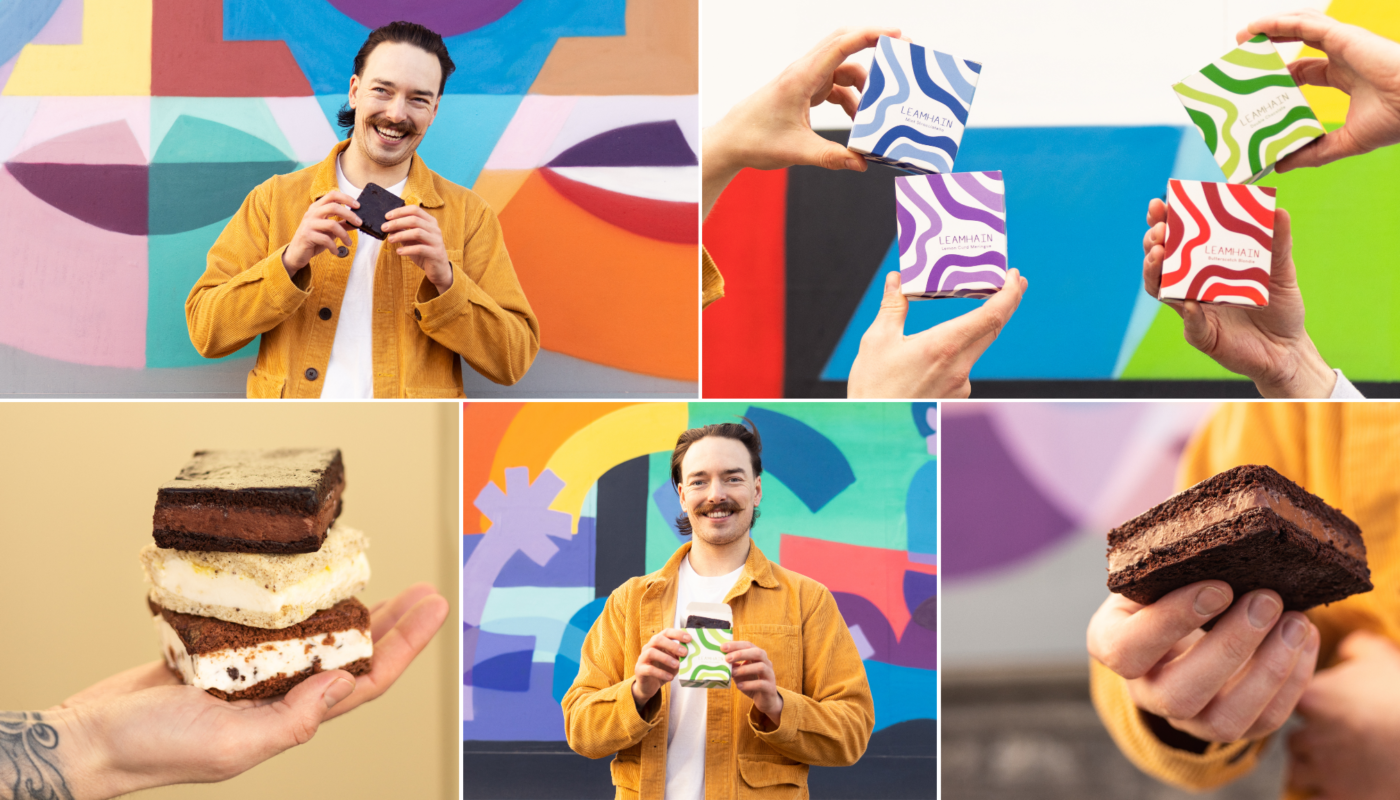 On a mission to produce high-end restaurant quality non-dairy desserts using the freshest locally sourced and most sustainable ingredients wherever possible, Dublin-based Leamhain has developed four flavoursome vegan ice cream sandwiches; Butterscotch Blondie, Double Chocolate Brownie, Lemon Curd Meringue, and Mint Stracciatella (weighing 135g ℮ and priced at €5.50 each). The highly sought-after range is now available to purchase in cafés, coffee shops and leading independent food stores across the country during Veganuary (the month of January) and beyond.

The nationwide expansion has been made possible following Leamhain’s recent move to its very own commercial kitchen in Smithfield, Dublin 7. The new 250 sq. ft premises has allowed Owner & Chef, Conor Sweeny, to quadruple production volumes and hand-craft as many as 10,000 ice cream sandwiches a week using a brand new top of the range Carpigiani ice cream machine specially imported from Italy.

Dublin-based fans of the brand will also be able to enjoy Leamhain’s seasonally inspired limited edition ice cream tubs, which are available for collection on Saturdays (10am to 3pm) from the company’s new premises in Smithfield (Dublin 7), Green Beards in Ranelagh, and Shoe Lane in Dun Laoghaire. Conor sources the majority of his fresh seasonal ingredients from McNally Family Farm and local zero waste eco-friendly wholefoods store, Small Changes, in Inchicore, as well as their nearby community garden. Classic one-off flavour releases to date have included Vanilla, Toffee & Apple Crumble, Pumpkin Spiced Latte, Jam Doughnut, and Cereal Milk with Strawberry Jam & Honeycomb. The one pint-sized tubs are priced at €7.00 each and can be pre-ordered online at www.leamhainicecream.com. Every flavour is vegan, gluten-free, and nut-free.

Commenting on the company’s Veganuary expansion, Owner & Chef, Conor Sweeny, said: “We are delighted to be expanding Leamhain vegan ice cream sandwiches across the island of Ireland. From testing recipes in my grandparent’s kitchen to hand crafting thousands of delicious sambos each week really is a dream come true. I cannot wait to see Leamhain grow over the next 12 months and I am beyond excited as to what the future holds for us.”

Having been let go from his job in the kitchen of London’s pioneering vegetarian fine dining restaurant, Vanilla Black, during the pandemic, Dublin-born Chef, Conor Sweeny (who also spent four years working at Dublin’s first ever vegetarian eatery, Cornucopia, earlier in his career), found himself alone at home while his partner, Louise, worked around the clock as a Nurse in ICU. Unable to afford the rent on their apartment, the pair decided to return home to Ireland in March 2020 and subsequently spent two months self-isolating in Conor’s grandparent’s old house in Killorglin, Co. Kerry.

It was there that the concept for Leamhain was born. One day, Conor, who had plenty of experience making batches of both dairy and non-dairy ice cream for a number of award-winning eateries, was sat eating a tub of non-dairy ice cream when he became alarmed at the poor quality of the product – it was too icy, had poor texture, and lacked the desired creaminess. This sparked an idea that resulted in Conor – a passionate vegetarian since 2012 and exclusively plant-based since 2015 – devoting the next year to conducting extensive research and development. Having experimented with different emulsifiers and sugars and looked closely at the composition of dairy ice cream, he then attempted to mimic dairy fats and the way they coat your tastebuds using vegan products. Sweeny trialled over 250 litres of vegan ice cream before landing on the final base recipe, which has since become the key foundation upon which Conor has created countless popular flavour combinations.

It was while sitting in the garden taking in the fresh Kerry air and gazing up at the sunny slopes of Carrauntoohil in the distance that Conor, moved by his surroundings, came up with the name ‘Leamhain’ (pronounced “Lao-En”) – the Irish name for the famous River Laune.

The inspiration of the River Laune is strongly represented in the company’s branding with the swirls on Leamhain’s fully recyclable packaging reflecting ripples of the water which flows from the Killarney Lakes through the town of Killorglin, then out to sea.