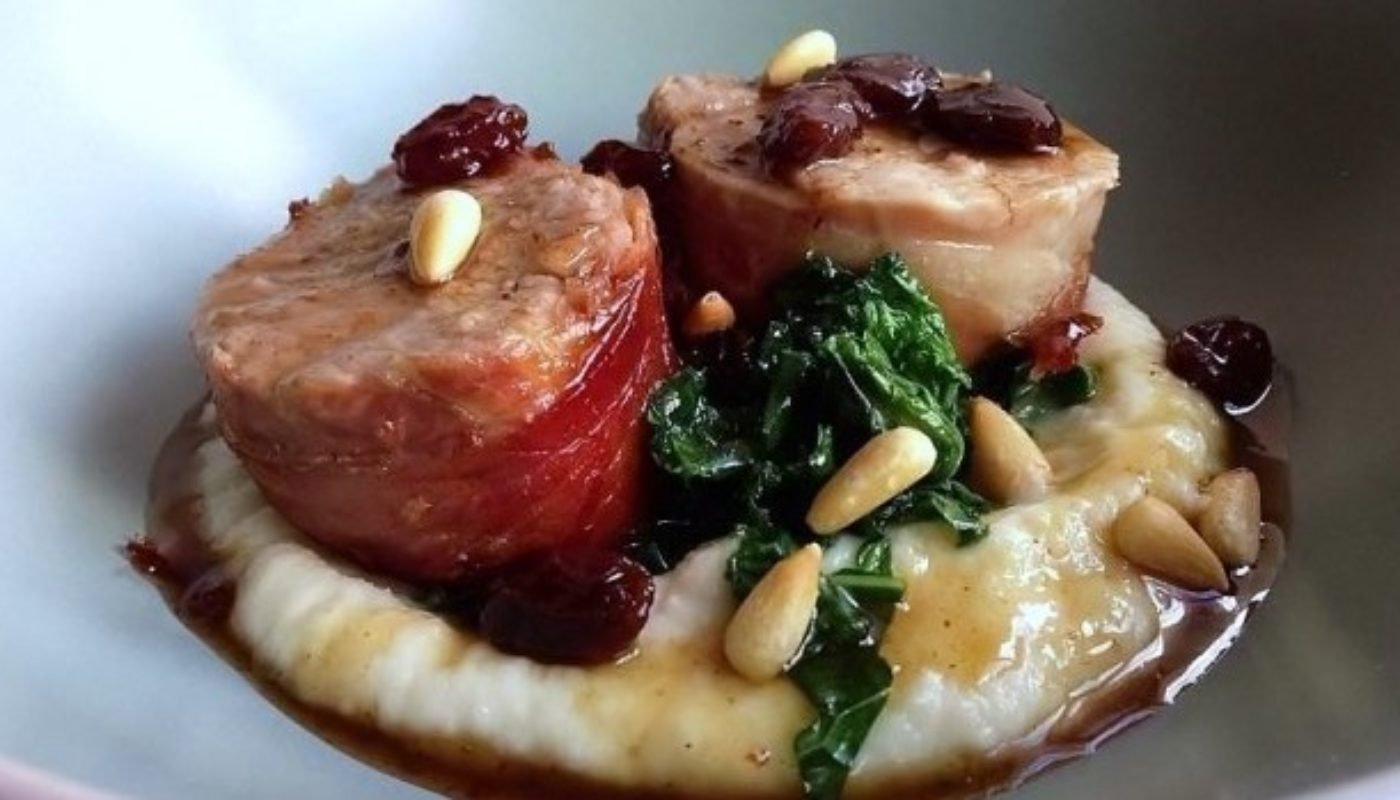 I love pork tenderloin (AKA pork fillet) but as it is very lean, it needs to be treated with care during cooking to ensure that it does not dry out. Wrapping it in Parma ham, prosciutto or smoked streaky bacon protects the meat and also adds a little bit of fat which helps to keep the meat succulent.

This dish is inspired by the punchy flavours found in the food of Venice where raisins, pine nuts and Marsala are used in many classic dishes from the region. Marsala is a fortified wine with a lovely rich flavour and can be used in a variety of sweet and savoury dishes. Rather than pair the pork with mashed potatoes I decided to sit the pork on a pillow of puréed cauliflower and some wilted kale which tasted delicious together.

1. Preheat the oven to Fan Oven to 180C/Fan Oven 160C/Gas Mark 4.
2. Lay six slices of Parma ham, slightly overlapping on a large piece of cling film.
3. Rub one of the pork tenderloins with half of the garlic and place on the arranged Parma Ham.
4. Using the cling-film to assist you, roll up the pork fillet so that it is encased in the Parma ham (without letting the cling film get caught up). Finally, tightly wrap the tenderloin in the cling film so that it resembles a thick sausage and allow to rest in the fridge for 30 minutes. Repeat this process with the other tenderloin.
5. Heat the olive oil in a large frying pan over a moderate heat. Remove the cling film from the tenderloins and place each of them in the frying pan. Cook until lightly browned all over and then transfer to a roasting dish.
6. Place in the oven for 25 minutes. Remove and allow to rest in a warm place.
7. Meanwhile add the pine nuts to the frying pan in which you browned the tenderloins and cook for a minute, stirring all the time until they are lightly browned.
8. Add the raisins and all the Marsala that they were soaking in and bring up to the boil.
9.  Reduce by half and then add the stock. Allow the sauce to reduce by a half again until it has thickened slightly and whisk in the knob of butter. Taste and adjust seasoning as required.

1. Melt the butter in a medium-sized saucepan over a moderate heat and add the cauliflower, milk and salt. Bring up to the boil and then reduce the heat to a gentle simmer. Cover with a lid and allow to cook for ten minutes until the cauliflower is soft.
2. Using a slotted spoon transfer the cauliflower to a blender along with a couple of tablespoons of the milk and process until smooth. Taste and adjust seasoning as required. Set aside and keep warm.

1. Melt the butter in a medium-sized saucepan over a moderate heat and then add the kale. Season with salt and butter and stir for a couple of minutes until the kale has wilted. Set aside and keep warm.

Place a generous dollop of cauliflower in each bowl and top with some wilted kale. Slice the rested pork and place two or three on top of the cauliflower and kale. Spoon over some of the pine nut and raisin sauce and serve.