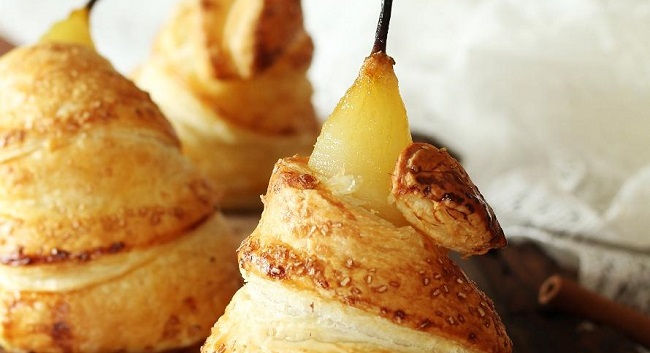 Lets not look back on Summer instead lets look forward to a cozy autumnal favourite, spiced poached pears recipe wrapped in a crispy flaky puff pastry.

This dessert resembles a beehive and is very easy to master and even easier to eat Puff pastry star anise poached pears.

1. Place the water, sugar, cinnamon, stair anise, vanilla pod split and de-seeded in a pot and gently heat until the sugar is dissolved. (TIP always go for a smaller pot so the liquid will completely submerge the pears during cooking)
2. Peel the pears, leaving the stalk intact and gently place them into the poaching liquid and depending on the ripeness and size of the pears, gently simmer for 10 minutes or until a small knife is easily inserted into the center of the pear.
3. Remove from the heat and allow the pears to cool in the liquid.
4. Once cold, take a pear and cut the base to ensure its sits upright. Place on a lined baking tray.
5. Taking your pre-rolled puff pastry sheet, cut a long strip about 1 inch in thickness and starting at the base, wrap this around the pear to completely cover it.
6. Taking some egg wash (whole egg mixed with milk) brush the pastry lightly and sprinkle with some brown sugar.
7. Place the baking tray with the four pears into a preheated oven set at 180C and bake for 10-15 minutes or until the pastry is golden brown. This is best served warm with a spoon of semi whipped cream. Shane has been very fortunate to have worked in and ran the pastry sections in some of Ireland’s leading 5* hotels and restaurants. Shane can be spotted all over the country carrying out his fun, interactive demonstrations with some of Ireland’s leading chefs. In September 2015, Shane was honoured to be awarded the title of “Best Bakery Manager in Ireland” in conjunction with Shelflife magazine and most recently has landed a cookery slot on Sunday AM where he can been seen regularly bringing his natural flare and love for all things sweet from the TV3 studios into the nation’s homes. chefshanesmith.ie