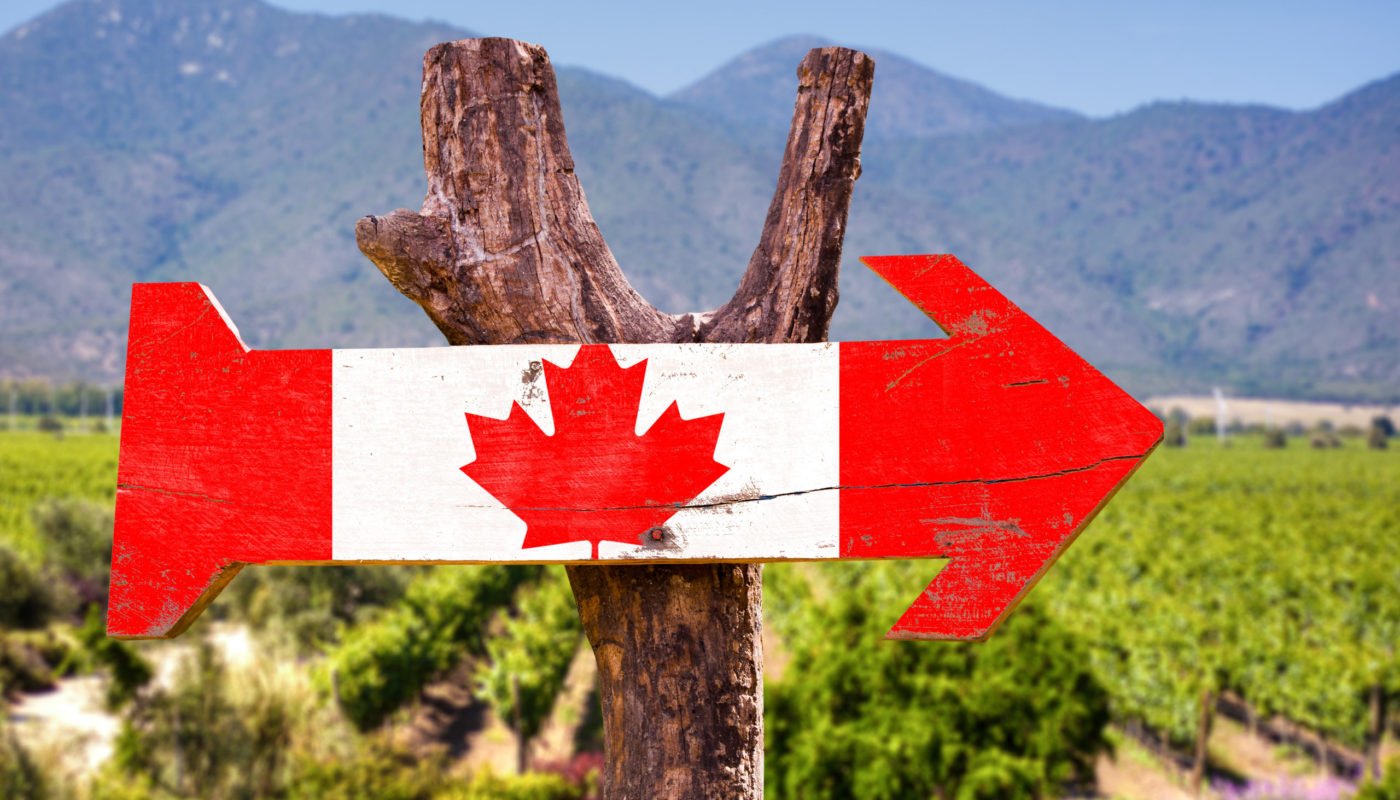 The land of the maple trees, Canada, also produces wines of excellent quality. The country is increasingly becoming a popular destination for wine tasting trips. We’ll look at 4 regions in Canada that are crucial for the wine industry, and provide some helpful trips for those wanting to travel to the country, such as getting your eTA permit.

Okanagan Valley
This magical valley used to be a huge glacier, which can be seen in the sandy white clay over glacial gravel sands, with limestone, granite and various pebbles of ancient volcanic origin. Located in central British Columbia, it is known as the fruit growing centre for Western Canada. Wines produced on these soils naturally have high aromatic intensity, subtle tannins and minerality. During the day, the grapes quickly develop sweetness, but at night it is reversed and cool, a classic example of the diurnal change that causes Okanagan wines to have a bit of acidity. Merlot, Riesling, Pinot Gris, Chardonnay and local sparkling wine blends are part of what this region has to offer on a global scale.

In Okanagan Valley, you’ll find Quails’ Gate Winery, founded by the Stewart family who emigrated there from Country Kildare, Ireland. The wineshop is open daily throughout the year and is known for its excellent quality of wines.

Nova Scotia
This Atlantic province has many wine growing areas. The Grape Growers Association, based in the far east of the country, was founded in 1982. Although the acreage here is smaller today, Nova Scotia currently has 24 grape growers with nearly 400 hectares. The province’s climate varies from region to region and grapes grow best where there is a favourable microclimate. In good weather in the province, temperatures can drop to -23 degrees Celsius, allowing a greater variety of vines to be grown than in colder regions such as Cape Breton Island.

For those looking for a truly immersive experience, a tasting on the Good Cheer Trail is a must. Enjoy a walk through Avondale Sky Winery, where gentle southern slopes and rolling hills feed acres of vineyards against an ever-changing tidal landscape. Learn how they harvest each grape by hand and enjoy the world’s most tranquil and enchanting wine tastings.

Niagara Peninsula
The common view in Niagara is that four grapes dominate the region: Pinot Noir, Chardonnay, Riesling and Cabernet Franc. These grapes ripen in almost every vintage and can usually produce a good bottle of wine in a wide range of styles and prices from one end of the peninsula to the other.

Monthly temperatures in Niagara are comparable to Bordeaux and Burgundy in France. The moderating effects of Lakes Ontario and Erie, and the protective influence of the Niagara Escarpment, provide an area with moderate temperatures during the growing season in spring and summer. The rich, fertile soil and unique microclimate are ideal for growing vitis vinifera grapes, making Niagara a prime wine-growing region. Niagara has over 13,600 hectares of vineyards. The grape-growing area stretches from Niagara-on-the Lake in the east to Grimsby in the west.

Decades of grape-growing experience and extensive research have led to ten unique growing zones being established on the Niagara Peninsula, including areas on the plains near Lake Ontario and the shores of the Niagara Escarpment.

A post shared by Winery Tours of Niagara (@winerytoursofniagara)

Vancouver Island and the Gulf Islands
With a picturesque coastline and several small towns welcoming you to southeast Vancouver, vineyards have fostered a culinary movement in the region, and you can taste wines from various grape varieties, including Pinot Noir and several sparkling wines produced at distilleries on the Saanich Peninsula in the Cowichan Valley. On Vancouver Island, viticulture really took off after a provincial government-funded trial – The Duncan Project – found that Pinot Gris, Auxerrois and Ortega were promising varieties for this unique coastal environment.

Vancouver Island is home to a community of family wine growers and winemakers. The environment is naturally blessed with green valleys, densely forested mountains and ocean landscapes. The island also offers some exceptional food festivals and culinary experiences to accompany your winery visit. Several areas have local climatic conditions conducive to winemaking. Cowichan Valley wineries are often protected from Pacific storms by nearby mountains, and have a long growing season with little chance of frost.

Planning your trip to Canada
Now that we’ve filled you in on some of the premier wine tasting destinations in Canada, you can start planning your trip. One thing many people forget is that Canada is in fact the second largest country in the world, larger even than the United States. Since Canada is so large, it’s difficult to visit everything you want in a single trip. For example, the distance from Okanagan to Nova Scotia is about 6000 km. Decide in advance which wineries in which region(s) you want to visit. But even within the regions themselves, distances can be quite large. Canada is filled with long stretches of roads that can easily catch you off-guard if you’re travelling by car. Gas stations can in some areas be few and far between. Always keep your tank topped off to avoid getting stranded.

A key part of travelling to Canada is knowing which visa to apply for, as this can differ depending on your nationality. Most Irish nationals are eligible for the eTA Canada permit, an electronic travel authorization which takes about five to ten minutes to apply for online. This does not require a visit to the embassy. However, it’s crucial to read up on the requirements for the eTA Canada, to make sure you are in fact eligible. If not, you must instead apply for an embassy visa, which in some cases can take months due to lengthy queues.

E-Visa is an international visa bureau whose goal is to make visa applications as easy and straightforward as possible. By taking care of most of the application process, e-Visa guarantees speedy approval of visa applications submitted through its website.