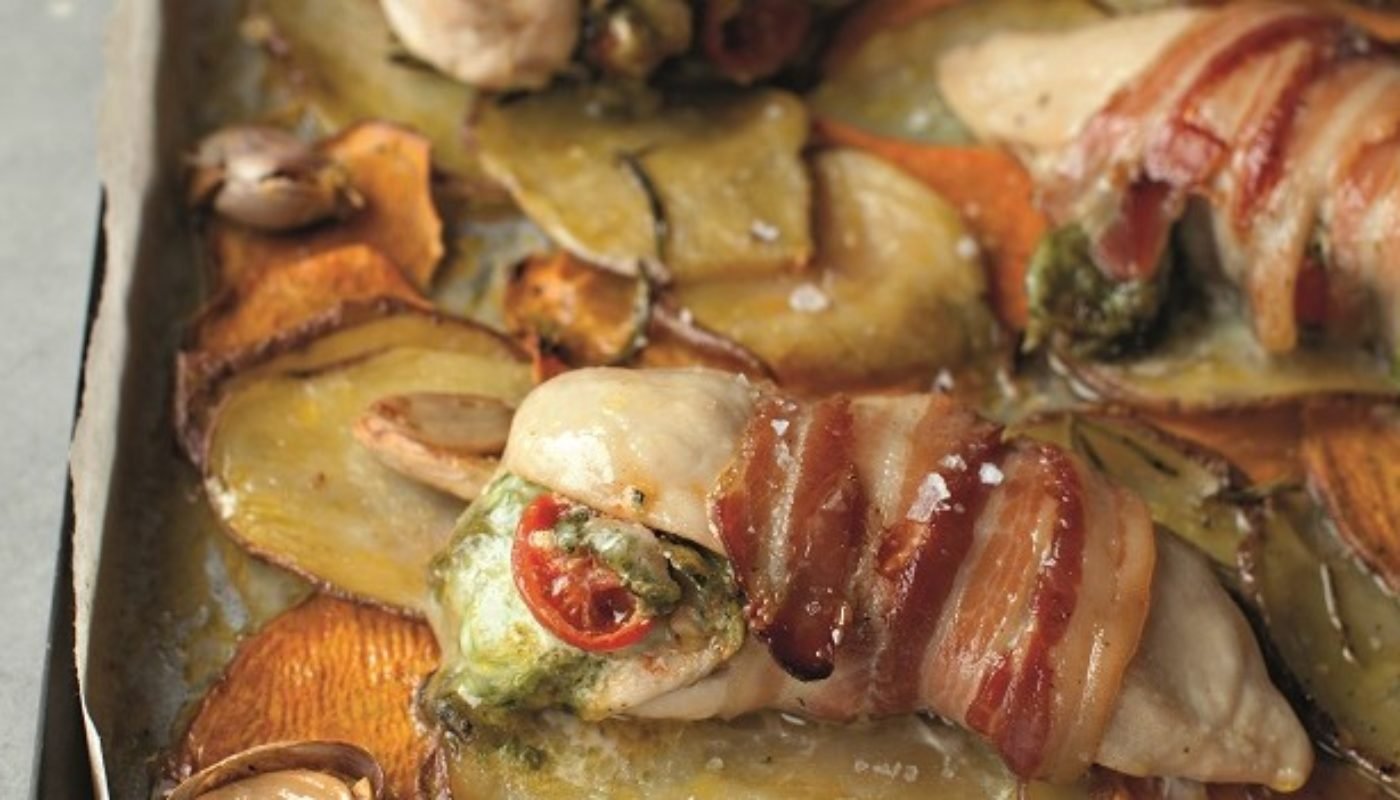 I always make my own pesto, which literally takes minutes, with basil, toasted pine nuts, garlic, Parmesan and olive oil or buy a good-quality one. These ultra trendy potato slices not only go well with this pesto-stuffed chicken recipe, but are great as a side dish for a barbecue. They can be made in large quantities in trays and simply reheated as necessary.

1. Preheat the oven to 200°C (400°F/gas mark 6).
2. Mix together the mozzarella and pesto.
3. Cut a slit into the side of each chicken breast and then stuff with the pesto-covered cheese. Place 2 halved cherry tomatoes in each breast. Wrap each stuffed chicken breast with 2 bacon rashers – not too tightly, but enough to hold the chicken together.
4. Season with salt and pepper.
5. To make the rustic mixed potatoes, cut the potatoes and sweet potatoes into 5mm (¼in) slices
– a Japanese mandolin is perfect for doing this – and arrange in a single layer on a large roasting
tray lined with parchment paper.
6. Add the garlic and rosemary and season with salt. Drizzle over the oil and toss until evenly coated.
7. Nestle the pesto-stuffed chicken breasts in the potatoes and roast for 20–25 minutes, until the chicken is cooked through and the bacon is crispy.
8. Remove the chicken from the oven and rest in a warm place for 5 minutes.
9. Return the potatoes to the oven in that time for a final crisp-up.
10. To serve, arrange the pesto-stuffed chicken breasts on warmed serving plates with steamed French green beans and the rustic mixed potatoes. Award-winning chef, Neven Maguire, is Head Chef/Owner of MacNean House & Restaurant in Blacklion, Co. Cavan. One of Ireland’s most talented and innovative chefs, Neven has been named ‘Best Chef in Ireland’ at numerous awards. His MacNean House & Restaurant has also been presented with many awards for best dining experience, food and hospitality and most recently ‘Best Wine Experience’ at the Hotel & Catering Review Gold Medal Awards 2015/16. Fulfilling a long-held dream, Neven officially opened his ‘Neven Maguire Cookery School’ alongside his restaurant late 2013.

His latest recipe book – The Nation’s Favourite Food – is on shelves now and his new series of Healthy Home Chef was broadcast to acclaim on RTÉ 1. Neven is currently filming his new series of Home Chef in Ireland and abroad. His previous series are being shown in the US (on PBS) and the UK (UKTV Food). His award-winning classic, Neven Maguire’s Complete Baby & Toddler Cookbook is also for sale in all good book stores or at Nevenmaguire.com.