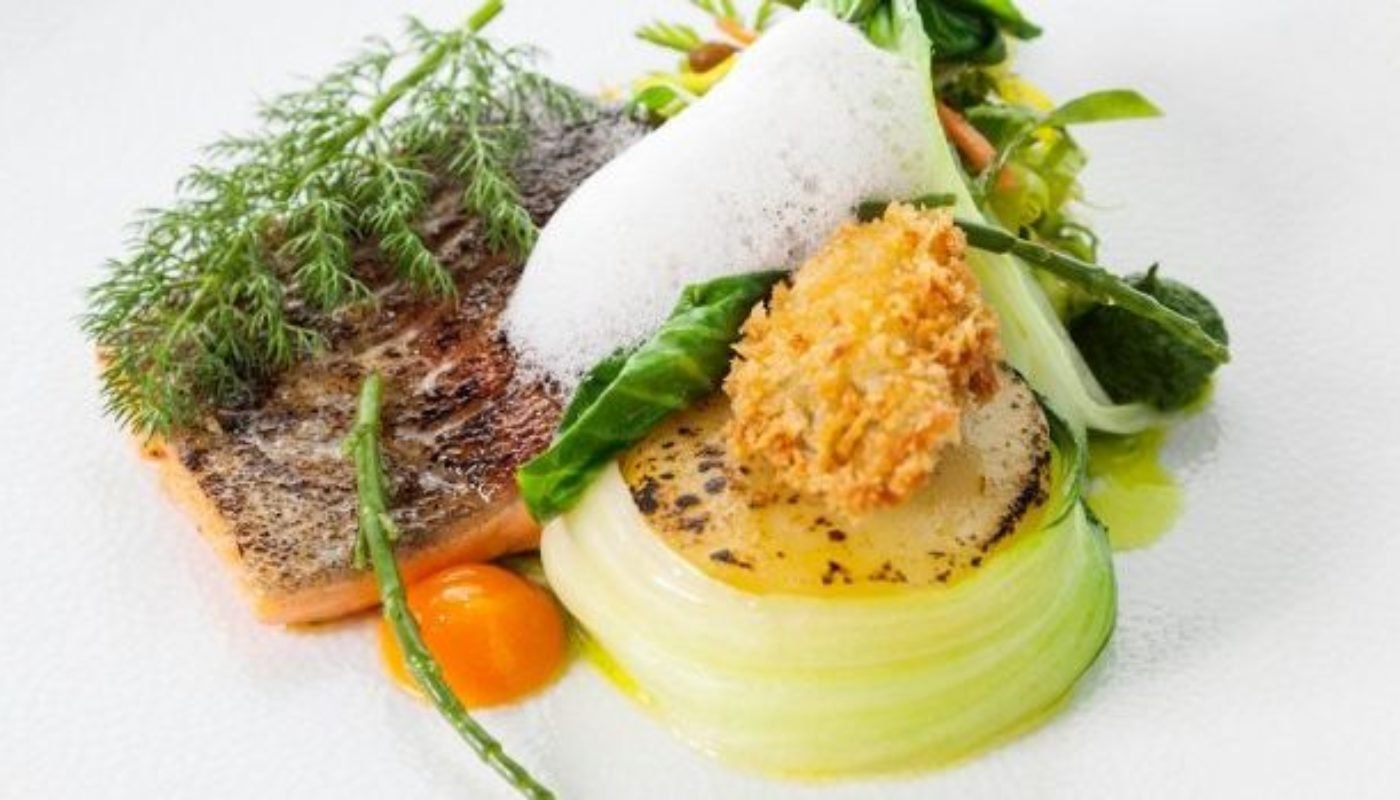 This recipe was created by Chef Igor Cikarev and serves four people.

Method:
Sea Trout
1. Pan-fry the sea trout fillet skin down on a very hot pan till golden colour, then place it in the preheated oven 180*C for 8 minutes. When fish is ready set aside and rest in the warm place.

Sweet & Sour Cabbage
1. Begin by preparing the sweet and sour cabbage. Sprinkle the cabbage with a generous pinch of salt and leave to stand in a colander for 1 hour. Rinse well under cold water and drain.

2. Heat the sesame oil in a pan and stir-fry the cabbage for 30 seconds. Add the sugar and leave to caramelise, then add the vinegar, sherry, ginger, chilli and sultanas and cook over a high heat for a few minutes until all of the liquid has evaporated.

Potato Fondant
1. Place a saucepan over a medium heat and add the butter. When the butter is foaming, add the potatoes and garlic and season with salt. Baste the potatoes with the foaming butter, turning them over until golden brown on both sides.

2. Put the fondants in the deep tray and cover with an aluminium foil. Cook it at 180*C in the oven until soft but not breaking apart.

Pak Choi
1. Blanch pak choi in the salty boiled water for two minutes and sauté with a little olive oil on the hot pan for another one minute.

Santos Tomatoes
1. Roast tomatoes with a little olive oil in the hot oven for 6 minutes.

Panko Oyster
1. Dip each oyster first into the flour, followed by the egg and finally into the panko breadcrumbs. Deep fry for 2 minutes until golden and crispy, then drain on kitchen paper, keep warm.

Vanilla Veloute
1. Split the vanilla pod and scrape the seeds. To make lemon foam by adding the stock, vanilla, cream and lecithin to the warm syrup and frothing the mixture using a hand blender to create a foam.

To Finish
Place the fondant in the middle of the plate then spoon some cabbage. Add sea trout and santos tomatoes. Finish by drizzling the vanilla veloute over the fish. Arrange the oyster on the top of potato fondant. Garnish over with the blanched samphire and serve immediately. RECIPE BY CHEF IGOR CIKAREV AT the gibson hotel Igor Cikarev is the executive head chef at the gibson hotel.

A Russian native from Riga, Igor got his start in the Latvian capital and has continued to grow his experience over the years.

Chef Igor also cooks for many of Ireland’s romance seekers on RTÉ’s popular TV show, First Dates, which is filmed at the gibson hotel in Dublin.

Stay up-to-date with all of the latest news from the gibson hotel here.