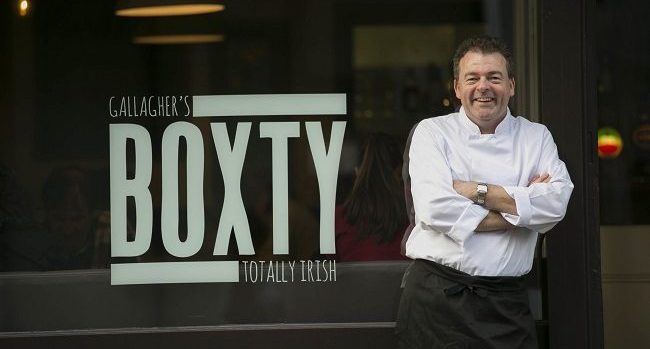 It’s Friday lunchtime and there’s a buzz in the air as I stroll the cobbled streets of Temple Bar, making my way through the excitable multilingual chatter prominent in this particular part of Dublin’s fair city.

Admittedly, I don’t come here very often as I, like many Irish natives, have a certain preconception about Temple Bar and the mad tourist scene it attracts.

Before I stray too far, I’d come to Temple Bar to meet chef, restauranteur and brewer, Pádraic Óg Gallagher (he’s keeping the Óg, he tells me when we meet), a man who’s CV is so impressive, I didn’t quite know where to begin. Chatting over the menu in his restaurant, The Boxty House, Pádraic regaled me with tales of his adventures in the Caribbean, West Indies and South America. As someone with an affinity for travel, I could have listened to these stories for hours, but at this particular moment, I was more interested in what made this adventurous spirit return to Ireland and open The Boxty House almost 30 years ago.

“I grew up in hospitality”, he explains as we make our orders to his attentive staff, some of which have worked here with him for eight years.

I grew up in Leitrim. We had a farm with animals that worked and a garden too. Like most people in Leitrim in the 70’s, I emigrated.” After extensive travels, Pádraic found himself working in a restaurant in London. When the idea of opening a Mexican restaurant in Dublin on behalf of his London employer fell through, Pádraic decided to pursue a long-held dream of his:

“I worked for some Syrians in Caracas and they used to make their flatbreads and fill them up with kofta. I was brought up on boxty, so I wondered if I could do something similar someday. I had this dream and along with my brother and another partner, we opened up this restaurant which I had dreamt about in Venezuela.”

From dodging hurricanes on yachts in the Caribbean to running his own restaurant, Pádraic didn’t strike me as someone who sits around waiting for things to happen. He had his dream and he went for it:

“I had experience with lots of different foods around the world but I wanted to open an Irish restaurant. There was a real gap in the market here. With Boxty, I wanted to create an Irish-themed restaurant and I wanted to be the hard rock of Irish food.” 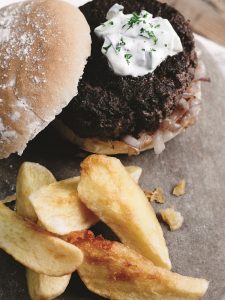 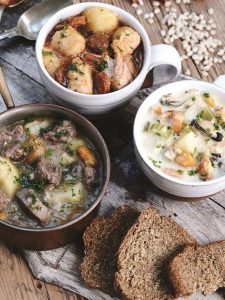 With only about 10 items on the first menu, which included an orange juice starter (no joke) and butterbean pâté, suffice to say, the restaurant has definitely evolved over the years:

“It was a very simple menu. We had about five boxty’s including bacon and cabbage, Irish stew and steak. There was nowhere else to get anything like that.”

Laughing, he remembers: “Ah listen, I had a starter of freshly squeezed orange juice on my first menu, honestly. You couldn’t get freshly squeezed orange juice around the place then, but it’s incredible that it was one of the starters. I also had a butterbean pâté and I met somebody at the launch of the trad fest just after Christmas and she told me she still misses that pâté.” 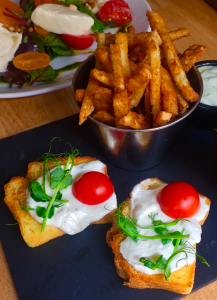 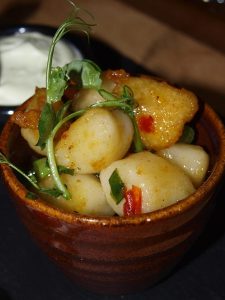 A keen learner, Pádraic went to culinary college in 2004 as he had previously had no formal training, just a love and passion for cooking.

The Boxty House has become a true staple in the heart of bustling Temple Bar. Despite the changes over the years (it’s a “very different restaurant now”, Pádraic admits), the ethos of Boxty House has remained the same:

“The ethos hasn’t really changed over the years. We wanted to champion Irish food and we wanted to bring it to the public. Our logo used to be ‘Bia, Caint, Ceoil ages Craic’. I rebranded four years ago after 25 years, but I still want to push the food out there. I did a lot of soul searching through the years and, though there are traditional Irish restaurants around, some serve lasagne and chips whereas I want to remain true to the boxty.” Describing his infamous boxty, he laughs at the realisation that many Irish people still don’t know or understand the concept of boxty:

“People still don’t know what boxty is about or what it even is. I’d say more people in North America know and understand boxty than Irish people do.” He’s not wrong either. As someone who never sampled it as a child, I would have been clueless about the wonders of Boxty until a few years ago.

Just as Pádraic’s menu has evolved over the years, so too has the restaurant scene in Temple Bar. While he admits that he initially chose Temple Bar for his restaurant due to “a combination of low rents and a vibe at the time that it was up-and-coming”, there’s “huge competition” here now:

“There were only 8 restaurants in the area when I started and there are over 83 today. That’s a huge change. In fact, the past year alone there’s been 600 new seats added to the restaurant scene.” A champion of Irish food producers, Pádraic maintains that he loves hearing a “great story”, and recalls meeting one of his suppliers, Fergus Dunne from Pigs on the Green, on Ash Wednesday amongst a crowd sporting the ashen cross on their forehead and fasting from meat.

As former President of the RAI, Pádraic believes his biggest achievement was “maintaining VAT 9”, something that was a struggle. He remembers that they “lobbied like hell” but managed to maintain VAT at 9% in a real 11th hour decision.

From that experience, Pádraic introduces me to his least favourite word: “One word that I hate is ‘can’t’. Things can be difficult, but they can always be done… one way or other. So never give up.”

He maintains this mantra when speaking about Brexit. While he admits that it’s “really worrying” and how he doesn’t have “good feelings for the year and how Brexit will affect the city”, especially as restaurants “are always the first to go”, Pádriac believes that, despite this, “things find a balance and everything will level out”. Speaking of finding a balance, I wonder how he manages to achieve one when so many others struggle to do so: “In the early days it was more difficult, but you have to make a balance or you won’t hold your marriage or life together and your children won’t know you. So I made a conscious decision that I’d always be home for dinner. I’d come home around 3pm and cook dinner and go back to work at 7pm. Dinner is an important part of the home life.”

Contemplating the current chef shortage, he asks “is it a chef shortage or is it chefs being able to demand better paying conditions?” Getting to the root of the issue, he thinks the lack of food education in schools plays a part: “Home Economics is a badly named subject and kids should be learning more about food. Skip the prayers lads, just go straight to food because it’s never to late to learn.”

It’s never too late to learn and if you’re starting off, who better to get advice from than someone with so much experience: “The one bit of advice I would give is to be patient. Most people won’t get very rich, but you can make a living and it’s a very exciting business to be in if you’re people driven.”

On the subject of being people driven, he refers to my previous mention of a work-life balance, adding: “You keep your work-life balance by working with good people and they’ll work with you, not for you.”

As well as running a restaurant, Pádraic is also a Fáilte Ireland Food Champion and has his own brewery, Jack Smyth: “It’s an honour to be a food champion and I was also really chuffed when I won the award for local food hero. I’m delighted to have been invited to give a talk at Food on the Edge this year too.” 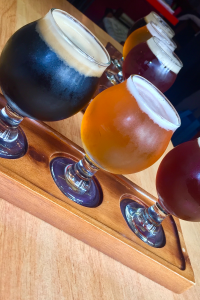 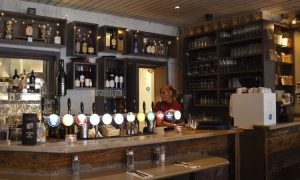 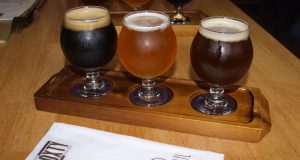 He speaks about his brewery with an almost giddy laugh: “I should have done that years ago. I don’t feel guilty having a beer at 8 o’clock in the morning anymore. It’s really great and something I was quite intrigued by.”

Looking to the future and Pádraic has no plans to slow down: “I’m doing a cookery book this year, it’s something I’ve been wanting to do for a number of years and from November, we’ll be celebrating our 30th anniversary though it only seems like yesterday.”

As we part, Pádraic mentions that he’s jetting off to New York just before St. Patrick’s Day to continue his promotion of Irish food. He’s truly found his calling:

“It’s the simplest things like smiling faces leaving my restaurant that gives me the greatest pleasure. I’m a very lucky person because I actually found something I love doing, and not everyone can say that.”