One Bowl Warmers – Tips and Tricks for the Perfect Stew 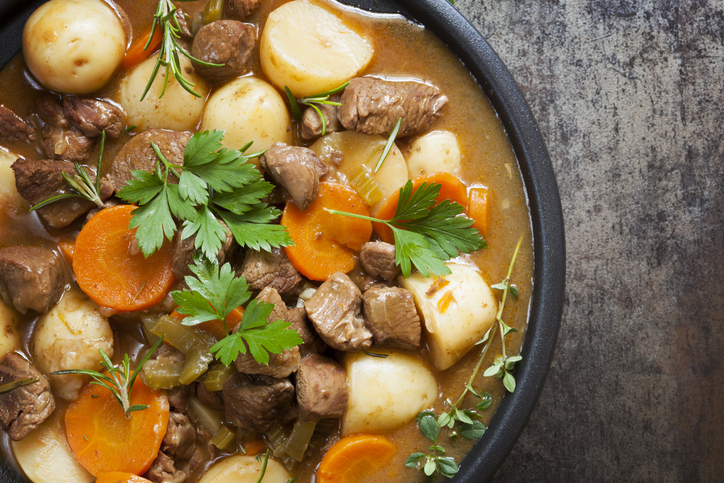 Growing up in a country like Ireland, I can safely say that my childhood woes were very minimal. However I learned over a recent hilarious dinner conversation that I was not alone in what I once considered to be ‘the struggle’. Coming home from school bursting to ask every parent’s favourite question – ‘what’s for dinner?’ only to have my evening ruined by one answer – ‘stew’. A dirty four letter word, I know I wasn’t the only one whose hopes were dashed by its utterance.

Think about it. Water, meat, boiled vegetables – Famine food. I think of brown stew, cubes of stringy beef floating in a tasteless broth. Any dish that is named after its less than appetizing colour probably isn’t ticking very many other boxes and anyone with memories of this dish will be wary of the ‘s’ word.

Being a cold creature by nature, a bowl of warming goodness when the cooler weather sets in is a very alluring prospect and I had to find ways to make the food equivalent of a hot water bottle more flavoursome. The below tips and tricks for whipping up a stew that will never underwhelm are simple hacks, guaranteed to warm your bones and leave your taste buds tingling.

A Cut Above the Rest 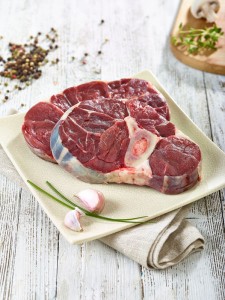 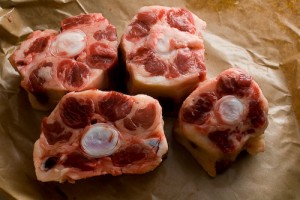 The single most important step in achieving stew-pendous (sorry) results in choosing your cut wisely. For a beef stew, it has to be bone-in shin. The flavour is insane in the membrane and this melts to create a gelatinous, glossy rich stock while the meat becomes oozingly tender rather than stringy or chewy. The marrow contained in the eye of the bone ensures that even if your added stock is lacklustre, the marrow will melt into the juices to make a light bone broth.

If you can’t get shin, chuck steak is the one, sirloin and the likes have no place in a stew and will turn chewy and general braising beef isn’t as generously marbled as chuck. If you’re feeling more adventurous, dispel all memories of the packet soup varietal and pick up some oxtail. Give it a blast in an oven at 220C for 20 minutes to get some caramelisation going, then add to your stew base, top up with red wine and three hours later you will have the most luxuriously unctuous stew you have ever tasted.

Chicken thighs and legs were made for stews. Breast worshippers will have to convert to leg lovers for a chicken stew to succeed and as with beef, bone in is best. De-skin these beauties and chop in half to expose the bone, which will allow the marrow to infuse into the braising liquor for maximum flavour. While making a stew is by no means an arduous process, it is always worth making extra for the simple fact that leftovers take on new levels of flavour when left to sit for a day or two in the fridge. Making a big batch ensures that when the tempting aromas take hold when you open that pot, you can have instant gratification as well as delayed reward the day after.

Weight wise, 150g to 200g meat per person will work but up that amount for leftovers. Veggies make a meat stew go further and be sure to opt for some hearty ones that won’t turn to mush – really embrace the season with some squash or parsnips or go classic with carrots and turnips. Cut everything into equal sizes, they needn’t be bitesize as a well executed stew will see its components unyielding in the face of a spoon – no knife needed.

While you are chopping your chosen veggies, adding a mirepoix of celery, carrot and onion is always a positive starting point, these are finely diced so not for bulk but rather flavour base. Just like you often have to cleverly disguise vegetables to get reluctant children to eat them, I have taken to keeping secret my go-to ingredient for achieving amazing depth of flavour in stews. Anchovies. Don’t balk. If you like caesar dressing, which given the salad’s enduring popularity and omnipresence on menus the world over you probably do, then you already appreciate the flavour boosting properties of anchovies, even if you choose to order your caesar sans actual anchovy fillets.

A couple of these saline little strips are the ultimate cheats way to up the meatiness and enhance sweetness of everything from beef to lamb and melt down to leave no textural trace, just oodles of umami. If you can’t bear to face the fillets, anchovy paste in a tube is a good option, or at a pinch, Worcestershire sauce contains anchovy extract and will do a decent job.

Mushroom Ketchup and dried porcini (ground to a fine powder or left whole) added to the braising liquor can give an intense earthiness and depth of flavour, but one of my favourite flavour boosters is the addition of a leftover parmesan rind to your stew, removing it after cooking. This allows the delicious savoury tones of parmesan to season the stew as it bubbles away in the oven, and minimizes waste. 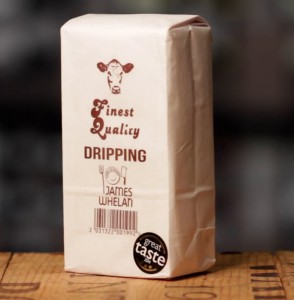 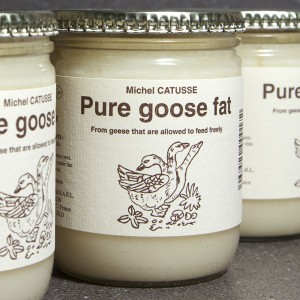 Beef dripping, bacon lardons and goose or duck fat are the first things into my pan when setting myself up for a perfect stew. It sounds ridiculously indulgent to use goose fat, but I decided a long time ago that if it’s a good enough base for Gordon Ramsay’s bouef borguignon, it’s good enough for my stews.

We all know now that fat equals flavour, but that needn’t mean eating a slick bowl of grease, once your stew is cooked and slightly cooled (if you are eating it tomorrow, which is ideal as it allows flavour to develop overnight) you can skim off the top the semi solidified fat. This is key – a screaming hot pan and sealed meat is the crucial step in ensuring your stew has maximum flavour, whatever cut you are working with. Those brown bits on the bottom of the pan are essentially caramelisation which as we all know means flavour.

As this step is of paramount importance, it is worth investing a little time in and this means sealing in batches if necessary as an overcrowded pan means the meat will steam and sweat rather than sear, by-passing caramelisation. Deep colour and a crust are what you’re after, give your meat the time and space it needs and it will give you the flavour you crave. If your pan doesn’t look in need of a good long soak after cooking, you’re doing it wrong.

To ensure your stew thickens up nicely, you can add a tablespoon of plain flour or corn flour and toss to coat the meat. With the fat already in the pan, this will create a roux of sorts and means that your end result is a thick, glossy sauce. Invest in good stock and half the work is done. For a traditional beef stew I will use half stock (from a pouch or bottle of concentrate, pressure cooking bones for stock doesn’t quite suit my schedule) and half red wine, a fantastic use for a leftover half bottle or so that is beyond its drinking best. If I’m feeling particularly extravagant, a glug of cognac may creep in first to deglaze the pan and scrape up the delicious bits- this isn’t alcohol overload as it will cook off and leave behind an inimitable richness of flavour.

Belgians aren’t just known for their chocolate, Carbonnade Flamanade is a delicious beef, beer, thyme and mustard stew of which they are exceedingly proud. In our Irish kitchens, we would do well to take the best elements from this classic and add some beer to our beef, along with a pinch of dark brown sugar for a sweetly luscious stew.

Dark Belgian ale is traditional for Carbonnade but we can put our own twist on it. Obviously beef and Guinness have had love affairs before in pie form, but cut out the fiddly pastry and you are on to an easy midweek meal winner. As for your stout of choice, it is worth noting that milk stout is less bitter, resulting in a well-rounded flavour overall.

For chicken stews, draw on the flavours of coq au vin with a rich burgundy or replace red wine with white, Reisling being an excellent choice. Of course, vegetarians need not be exempt from the warming wonders of a winter stew and even devout meat-lovers can enjoy a plant-based pot of goodness. Add lentils, beans, bulghur and the like to cut out the need for a dedicated side.

If you want a hearty vegetarian stew with a little bit of texture, portobello mushrooms and aubergines are your best veggie friends as they will soak up the flavours of the sauce while maintaining their structural integrity. Read – won’t turn to mush. Want to impress your veggie friends? Beets instead of beef in your bourguinon will do just that. Timing is everything. Depending on your desired cut, you will need anything from 1.5 hours to 5 hours. Patience is key. This is a make the day before kind of meal and deserves to be waited on. The toughest of cuts like chuck, shin and oxtail will need 3 hours minimum while chicken thighs and legs will be good to go in an hour and a half. If you have the time there is no harm leaving the latter bubbling away on a low heat to infuse the braising liquor, but there are no tough fibres that need to be tenderised by a longer cooking time. All that bubbling and braising extracts deep, mouth-enveloping flavour from your ingredients, so to balance this out a final taste will tell you if a little acid is needed. A squeeze of lemon or dash of good balsamic is often the difference between a good stew and a great one. The addition of a tablespoon of tomato pureé can act in the same way, but this is best added early on in the cooking process.

The very last step you should take is to season, as doing this earlier in the process could leave your stew over-salted and too intense as the liquor reduces during cooking. If you have the time, inclination and regular cholesterol, serve some pommes mousseline (mash made with an equal butter to potato ratio…oh my) alongside your unctuous stew. If not, peel potatoes, infuse milk with the peel and add this to your cooked potatoes before mashing for an earthy and flavoursome mash every time.

Seasonal favourite celeriac makes a lighter mash, until you start adding butter of course…but you’re saving on carbs so do it I say. Personally, I like texture contrast and a bit of bite, so often serve stews with goose fat roasties – afterall, you already bought a jar for sealing the meat, its just economical really…