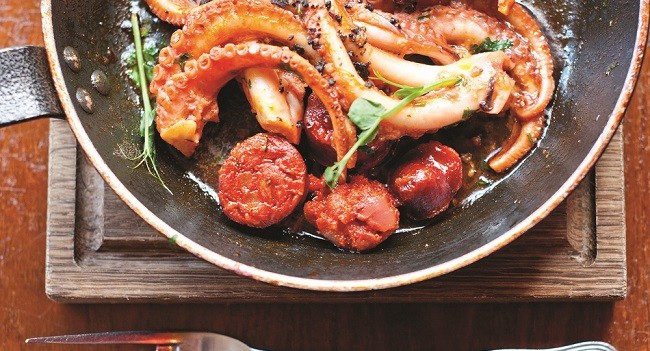 This octopus tapas recipe is flavoured with two true tastes of Spain, chorizo and Oloroso sherry. Created by Chef JP McMahon, this tapas recipe is the perfect way to enjoy World Tapas Day on June 16th 2016.

1. To cook the octopus: place the octopus in a medium-sized pot and cover with salted cold water. Bring the water to the boil and simmer for 2 hours or until the octopus is tender. Remove the octopus from the water with the aid of a tongs and allow to cool. When the octopus is cool enough to handle, cut the tentacles in 1cm rounds.

2. In a large frying pan, fry the chorizo rounds in some oil. When nicely browned, add the octopus and cook briefly.

3. Pour the sherry into the pan and bring it to the boil. Cook off the alcohol (this will take 2 to 3 minutes) and then add the parsley. Remove from the heat and season to taste.

4. To serve: Divide into four bowls and serve immediately.