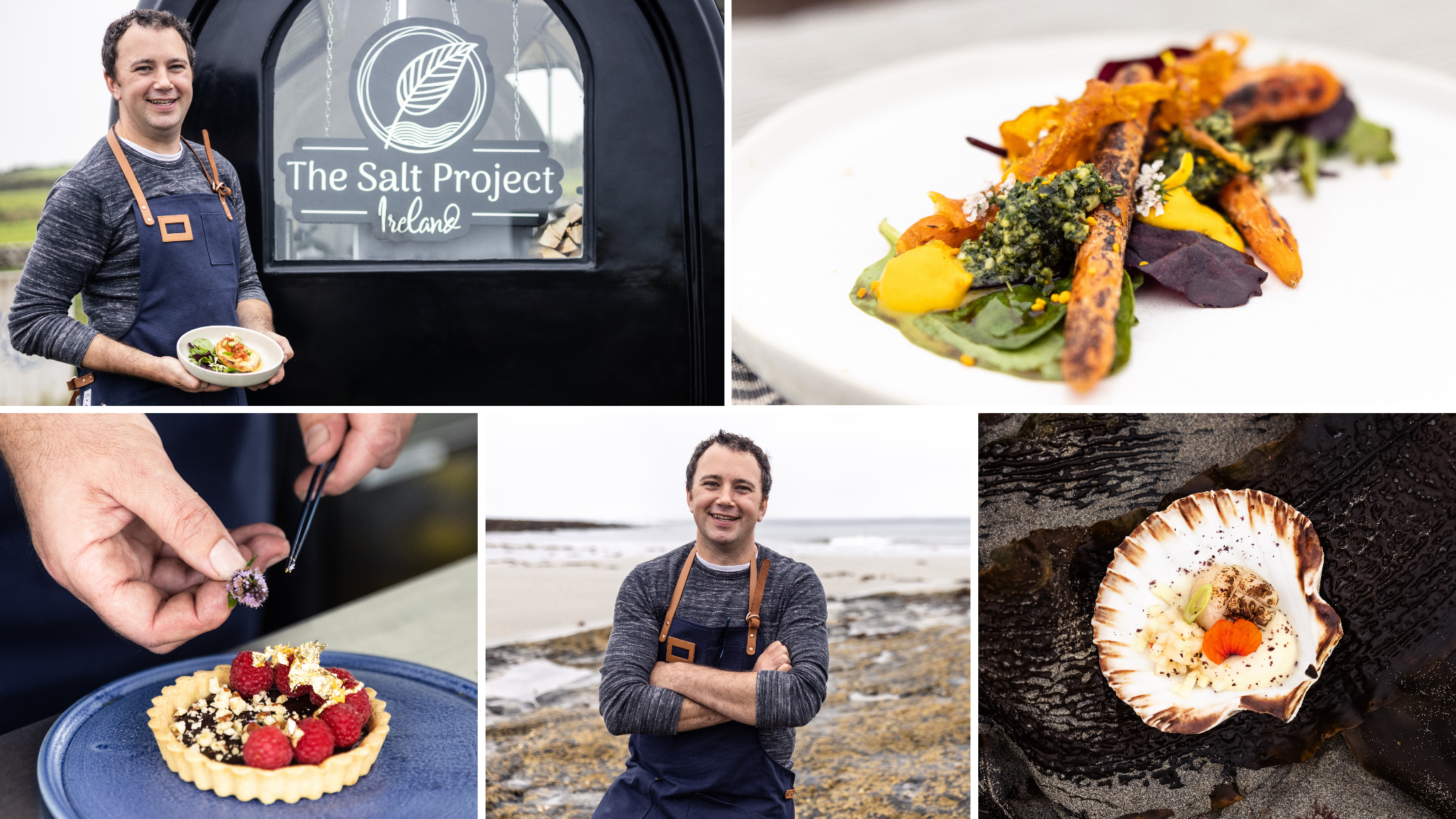 Kildare-based Chef, Caomhán de Bri, is taking a fresh new approach to street food with the launch of his nomadic food trailer, The Salt Project. Travelling from coast-to-coast, he’ll be popping up in scenic locations all over the country offering an Irish-inspired plant-focused street food dining experience that hasn’t been seen on these shores before.

Caomhán has worked in professional kitchens for over a decade, including a year in London in Gordon Ramsay’s Michelin-starred restaurant, Maze, and five years as Head Development Chef for catering firm, ISS, in Dublin. He’s also a recent graduate of TU Dublin’s new ‘Botanical Cuisine’ course – the first ‘farm to plate’ culinary degree programme of its kind in Europe – of which highly regarded Irish Chef & Restaurateur, JP McMahon, is a Patron. This new-found knowledge is reflected in Caomhán’s menus, which will see the humble vegetable heroed in a series of innovative plant-based dishes. Vegetables harvested that morning will be cooked over hot coals on a Hibachi grill and others will be finished in an Ooni pizza oven.

The Salt Project, of which the food trailer is the first of several elements to launch, (an exclusive Co. Sligo-based wellness retreat with Wild Atlantic Way views and luxurious boutique accommodation will follow in Spring/Summer 2022) is something that Caomhán has devoted endless hours to in recent years in order to turn his vision into reality. Keen to perfect his craft and ensure that his offering is the best that it possibly can be, Caomhán spent a number of months last year working alongside TV Chef Kwanghi Chan – helping him successfully launch and operate his popular Asian street food truck, Bites By Kwanghi.

Commenting on the launch of The Salt Project, Owner, Caomhán de Bri said: “The Salt Project is as much about the small producers scattered throughout our wonderful island, naturally sourced ingredients and beautiful locations as it is about the cooking methods and techniques I’ll be utilising. The dishes I’ll be serving are a celebration of the many great Irish chefs and producers that have guided, influenced and inspired me throughout my career to date. People like JP McMahon, Kwanghi Chan, and Conor Spacey. Sourcing fantastic local produce and cooking with ingredients that have been harvested from the ground as late as the morning of service, means less interference and big bold flavours.”

Having grown up with a huge appreciation and respect for food, passed down to him by his parents, Caomhán’s menus have always had a strong focus on food provenance. This will act as a real point of difference in his ever-evolving offering. His long-term goal is for The Salt Project to be as self-sufficient as possible, negating the need for over reliance on large suppliers. The groundwork was laid last winter that will enable Caomhán to utilise two-acre plots in Co. Sligo and Co. Roscommon to establish his own organically focused food growing system. Working in tandem with nature, long-term this will provide the food trailer with a variety of homegrown seasonal ingredients throughout the year.

The flexibility that operating from a mobile food trailer gives Caomhán means that not only can he cook with the seasons, but he can also create Irish-inspired street food dishes that have a real sense of place to the locations that he’ll be pitching up in. Visitors to The Salt Project can expect an offering that consists of a series of Blaisíní (small bites) dishes that have been specially designed to showcase locally grown and artisan ingredients from small scale producers specific to each region.

When out west, he’ll be choosing fish and shellfish fresh off the boats in Galway and featuring Achill Island Sea Salt and Black-faced lamb from Co. Mayo, along with Keith Clarke’s Knocknarea Honey from Co. Sligo.

Caomhán will be using his own organically grown vegetables supplemented by other ingredients from Conor McHugh of Coolree Cottage Farm in Naas, Co. Kildare. The traditionally milled flour for his flatbreads is sourced from The Little Mill Company in Co. Kilkenny, cheeses will come from almost every county in Ireland depending on the location, and seasonal fruits from Co. Wexford. A keen forager, Caomhán will also be heading out into the wilds of Co. Wicklow and Co. Kildare to collect his favourite wild herbs, nuts and hedgerow berries.

The Salt Project’s first two confirmed locations are the recently opened Wickham Way Market in Limerick city – where it will operate on Fridays (12pm to 9.30pm) and Saturdays (9am to 4pm) – and Rosses Point, Co. Sligo, where the food trailer will pitch up midweek (trading days/hours will be confirmed shortly).

In addition to his Blaisíní offering, come Spring 2022 Caomhán also plans to host a series of intimate monthly Supper Clubs, offering one-off dining experiences in stunning surroundings for small groups of 15 to 20 diners. Tickets for these will be available via www.thesaltproject.ie in the New Year.

Caomhán, who has a degree in Hotel & Restaurant Management from DIT Cathal Brugha Street, has spent the last five years working as a Head Development Chef for ISS Ireland – specialising in high-end corporate catering and private dining. He is also able to call on experience gained working as a Chef de Partie for a year in Gordon Ramsay’s one Michelin star restaurant, Maze, in London under the tutelage of Chef, Tristan Farmer. And, just last spring, Caomhán partnered with Nathan Dimond (former Head Chef at Cliff at Lyons) to successfully operate a new venture named Ginger’s BBQ – a long term project Nathan had been working on which started life as a pop-up in the premises of Canteen Celbridge, Co. Kildare. Caomhán is also a recent graduate of TU Dublin’s new ‘Botanical Cuisine’ course – the first ‘Farm to Plate’ culinary degree programme of its kind in Europe – of which highly regarded Irish Chef & Restaurateur, JP McMahon, is a Patron.