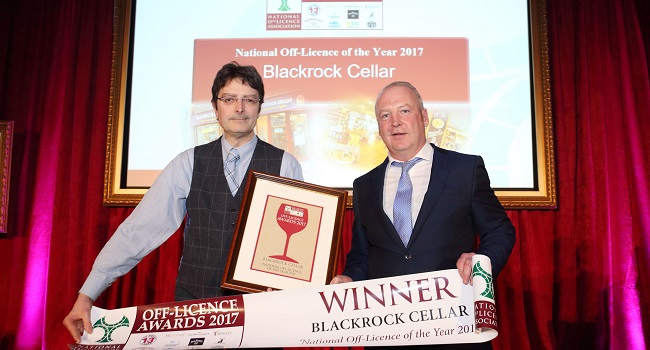 The National Off-Licence Association (NOffLA) announced the winners of the Off-Licence of the Year Awards 2017 yesterday 24th of January. The organisation took the opportunity at the ceremony, held at the Honorable Society of King’s Inns, to call on the government to move swiftly and introduce the Public Health (Alcohol) Bill. This is the 21st edition of the awards, which highlight excellence in the off-licence sector.  Finalists included 38 off licences and saw Blackrock Cellar awarded National Off-Licence of the Year 2017.

Now in their twenty-first year, the awards recognise and showcase excellence in the off-licence sector. Gary O’Donovan, NOffLA Chairman,  said, “The annual NOffLA awards highlight the expertise of the independent off-licence sector, showcasing the benchmark of personal service and top quality products offered by our highly trained members.”

In his speech, he welcomed the Public Health (Alcohol) Bill “as it ensures the highest standards around the purchase, and thus consumption, of alcohol.” He said that the bill is “well past due” and that they are looking for “decisive action that will ensure the public is safe from reckless alcohol retailing practices”, referring in particular to  below invoice cost selling of alcohol

“As socially conscious independent retailers, NOffLA welcomes the Public Health (Alcohol) Bill as it ensures the highest standards around the purchase, and thus consumption, of alcohol. The Bill however is well past due and we believe the Irish public now deserves to benefit from the protection offered by measures such as Minimum Unit Pricing. The Government has waited long enough and we are looking for decisive action that will ensure the public is safe from reckless alcohol retailing practices”.

All 38 finalists were awarded certificates of either ‘Merit’ or ‘Excellence’ and a Customer Service Award based on their performance. Other awards on the night included:

Judging for the awards began in June 2016 with the ongoing judging process culminating in a blind wine tasting which involved participants answering questions about the unidentified wines. Final awards were allocated following this process.