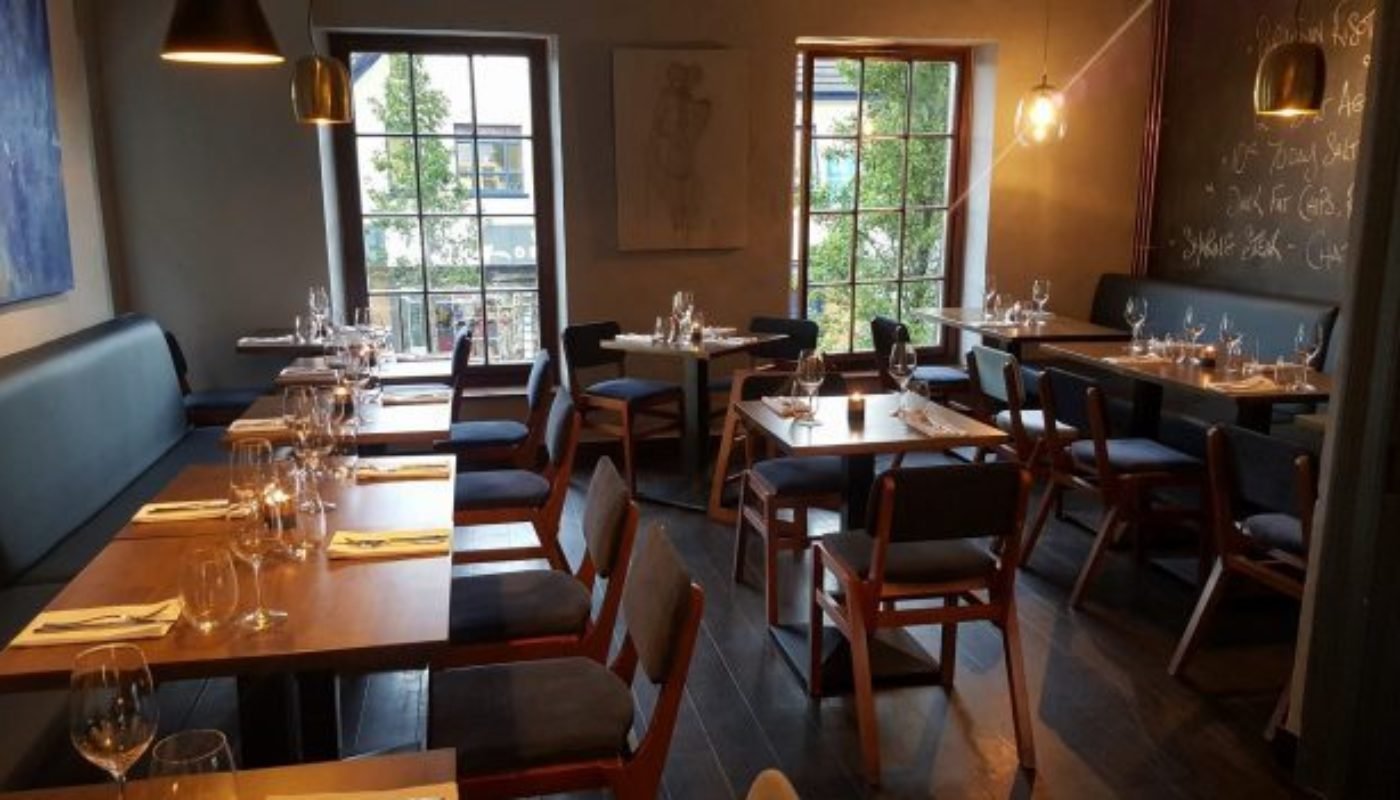 A Feast Fit For a King – Noble Holywood Restaurant Review

2017 has been a great year for Noble. The restaurant opened just over a year ago in the charming town of Holywood in County Down and has been the recipient of a slew of honours, culminating recently in the award of a Michelin Bib Gourmand, which recognises restaurants that offer “high-quality products and services and good value for money”.

Announcing the award, Michelin tweeted that it was an easy decision awarding a Bib to the “small but perfectly formed” restaurant. I was intrigued so decided to book a table and try it out for myself.

Noble is the brainchild of Chef Pearson Morris and front-of-house supremo Saul McConnell, who met whilst working for Michael Deane in a number of his restaurants. They both harboured ambitions to set up on their own so when the premises in Holywood – which previously housed a local Bistro – became available, they decided to throw caution to the wind and go for it. The restaurant is small but well designed so that it doesn’t seem cramped and the overall feel is cosy and intimate. Contemporary artworks provide pops of colour against the dark tones of the navy walls and wooden tables. Every inch of space inside the restaurant is cleverly utilised and despite its diminutive size, there is still enough room for the front-of-house staff to flit between the tables like nimble mountain goats as they serve food and drinks to expectant diners.

We had arrived early for our Wednesday evening booking at 5.30pm and were shown to our table by Saul. The restaurant had only just opened and we were the first diners of the night, but less than an hour later every table was full – a feat for any restaurant mid-week and a sure sign that the restaurant is doing something right.

Noble offers an extremely well-priced ‘Early Doors’ menu with two courses for £15 or three for £20, however, we decided to go for the à la carte menu, tempted by the range of seasonal autumnal dishes listed. The à la carte menu is divided into sections covering snacks, small plates and large plates with a separate dessert menu. A large blackboard on one of the walls also lists daily specials which on the evening we visited included several fish, meat and vegetarian options. Sipping on a gin and tonic apiece – a Jawbox (£4.50) from the Echinville Distillery in Belfast for me and a Rock Rose (£6.50) from Scotland for my companion as we waited on our snacks of Bread & Whipped Butter (£4.50) and Pork Scratchings (£3.50) to arrive. The breads, which included a moist Guinness Wheaten Bread and mushroom-shaped White Bread Rolls, were fantastic. The warm breads were presented to us snuggled together in a cutesy felt pouch and served with a whipped butter that was as light-as-air. I fervently believe that nothing beats the taste and texture of Irish butter and for me this one, sourced from Abernethy Butter and made from the milk of cows that graze on the lush green pastures of the Lagan Valley in Northern Ireland is as close to perfection as you can get. The Pork Scratchings were crisp and porky as one would hope and delicious eaten with the slightly tart apple sauce. From the ‘Small Plates’ section of the menu we chose a trio of dishes which we shared, finding it impossible to narrow our choices down to one each. Luckily we were hungry, as the first of these was a generous portion of Risotto (£9.50) with an irresistible buttery flavour, which we chose from the ‘specials’ board.

It was packed full of girolles and cheese that melted into the warm rice to create a lovely velvety texture when eaten. This dish screamed ‘comfort food’ and was perfect for this time of year as the days begin to get shorter and temperatures drop. Next up was a lighter offering of Warm Fig, Goat’s Curd, Whiskey Marmalade & Walnuts (£7.50) which we both enjoyed and felt was a well-thought out plate of food, where each of the elements worked in perfect harmony together. Our final starter – Crispy Beef Rib, Savora Mustard & Gherkin (£7) was one of the highlights of our meal and was full of rich assertive flavours. Cooked beef rib meat had been formed into two batons which were then breadcrumbed and deep-fried until golden and crispy on the outside.

The breadcrumb coating also served to protect the meat and retain its succulence. The meat was full of flavour and delicious when eaten with accompanying pickled gherkin and French Savora mustard, with its gentle background notes of cinnamon, tarragon and honey.

Our main courses or ‘Large Plates’ were both straightforward unfussy dishes and all the better for it. A kitchen that has the confidence to keep it simple ticks all the right boxes for me and at Noble, Pearson Morris has an inherent understanding of how to bring out the best in the ingredients that he uses.

Granted, his job is made easier when you are using quality products such as my companion’s main course choice of the 45-day Salt-Aged Ribeye Steak (£27.50) sourced from the award-winning Hannan Meats in nearby Moira.

The steak had been cooked perfectly and was tender with an almost buttery texture. The accompanying dripping-fried chips crunched pleasingly as you bit into them to reveal a soft potato centre. This was a fantastic plate of food. My Venison Haunch, Spiced Red Cabbage & Celeriac (£18.50) was also a huge hit. The pan-fried venison had a gamey flavour without being overpowering, which was enhanced by the agro dolce notes of the spiced red cabbage and earthily sweet celeriac purée. Some sautéed cavolo nero completed the dish. We finished our meal with a duo of excellent desserts. I loved my choice of Warm Pear Cake (£7.50) but we both agreed that the Plum Frangipane Tart (£6.50) with its impossibly thin and very crispy pastry base was outstanding.

A thin layer of plum jam separated the pastry base from the frangipane topping which was studded with slices of fresh plum. I loved the contrast of textures at play in the tart and it is definitely one of the best desserts that I have eaten this year. It was served with a sweet cheese (mascarpone) ice-cream which was cool and creamy against the tart… just lovely. I also decided to treat myself to a glass of dessert wine and was totally enthralled by the well-balanced 2010 Le Terteraux from the Loire Valley which is made with 100% chenin blanc. It possessed hints of caramel on the palate that paired beautifully with both our dessert choices.

In many ways it’s hard to do justice to the food in Noble with mere words as this is a restaurant that should be visited and experienced first-hand. I loved every aspect of my meal there and would recommend it without hesitation as a perfect example of the food that is modern, Irish and exciting.