The next tiny thing: Fade Street Social innovates with micro leaves and vegetables 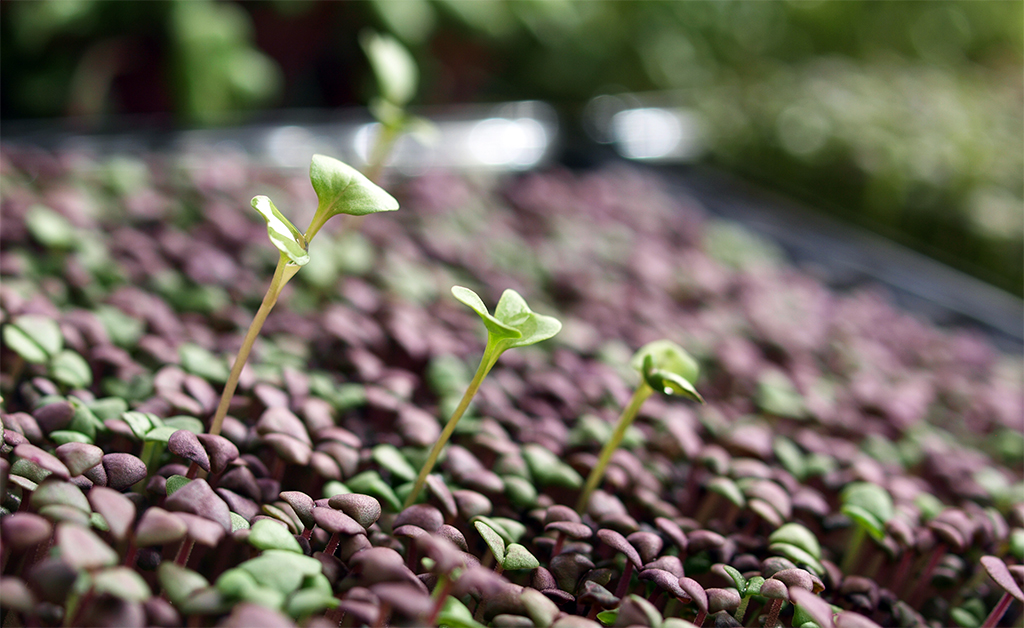 Two of the small details we’re proud to showcase are our micro leaf and micro vegetable selections. Throughout Fade Street Social we work with micro leaves and vegetables- small versions of all the best herbs and vegetables we love, grown fresh by local, Irish farmers. Don’t let their small stature fool you, these plants pack in even more flavour than their large counterparts.

A sign of a good restaurant is its ability to function as a machine, with all of the component parts working towards one end goal – sending out beautiful plates of food while maintaining an air of effortlessness.

Very often, it’s easy to lose sight of parts that make up the whole and essentially to overlook the details that make a place special. From the beginning, we’ve looked at Fade Street Social as something special, a restaurant that would stand out in the food scene that is Dublin.

And since all that makes a place exceptional is in the details, from the start to the finish of a meal, we believe that the smallest elements have the power to change a dining experience for the better.

Two of the small details we’re proud to showcase are our micro leaf and micro vegetable selections. Throughout Fade Street Social we work with micro leaves and vegetables- small versions of all the best herbs and vegetables we love, grown fresh by local, Irish farmers. Don’t let their small stature fool you, these plants pack in even more flavour than their large counterparts.

When food gets cute

Micro leaves vegetables have somewhat taken off in Ireland in the last couple of years. We’re seeing them appearing in salads, on top of our starters and scattered delicately all around our mains and even making appearances around desserts in restaurants across the country.

They’re a little detail that chefs have gone crazy for in the last few years but that guests just don’t really pay any attention to. Believe it or not, they’re considered to be important components of many dishes.

So what’s so special about micro leaves and vegetables, or for that matter, what are they in the first place?

A micro plant starts out its life like any other leaf or vegetable. The seeds are sown in exactly the same fashion as their larger kin. The difference is, they’re harvested much earlier than their counterparts, sometimes after only about two weeks instead of up to four months. This extremely short growth period has a big impact on the flavour of the leaves vegetables.

So, micro leaves and vegetables are, as the name suggests, the tiny relatives of standard plants. But what makes them so special is that their flavour is distributed across a vastly smaller surface area, delivering more pungency than previously available to chefs with more traditional plants.

As a young chef, traveling and training, Dylan encountered micro leaves in more than a few international kitchens. He was trained using them and wanted to bring them back to Ireland, to utilise them in his quest to set his cuisine a level above the rest. The problem was, nobody in Ireland was growing them.

Think back to the days of Mint, when Dylan McGrath was an up and coming chef hell bent on getting his Michelin star. He wanted to stand out, to create a name for himself, and part of doing so required him to fly in micro leaves from the UK.  Think about that- flying in leaves from the UK. Sure, they were an extravagant expense, but Dylan and Mint were all about artistic expression and the leaves were a must have.

Our inspiration, our suppliers

Fast forward ten or so years, and the game has drastically changed. The micro leaf trend may have kicked off, the days of flying them in from abroad are over. Ireland is a different country now, and the extravagance of Mint is all but non-existent.

From the beginning, Fade Street Social has been an all Irish restaurant. Part of the reason we’re so enamoured by our micro leaf and vegetable selection, and why we’ve incorporated it seamlessly into our menu, is down to the Irish farmers who have put in the hard work to develop a market here at home.

Not only do the plants produce sweeter, more succulent crop, but there is finally a market and an ability to grow it here in Ireland. Sometimes it’s normal to fall into the habit of treating our unique ideas as oversold once they become mainstream. But for Dylan and for Fade Street Social, we see it as the most positive possible outcome.

We opened our doors for business at a time when there was very little confidence from Irish banks. It was our suppliers that got us on our feet in the first place, forming a lasting relationship based on trust. They believed in us, and now we stand by them- not only by continuing to choose Irish first, but by showcasing the best of what Irish farmers can produce.

So the next time you’re dining in Fade Street Social, pay closer attention to the micro leaves and vegetables adorning your favourite dishes and remember the labour of love that got them there.