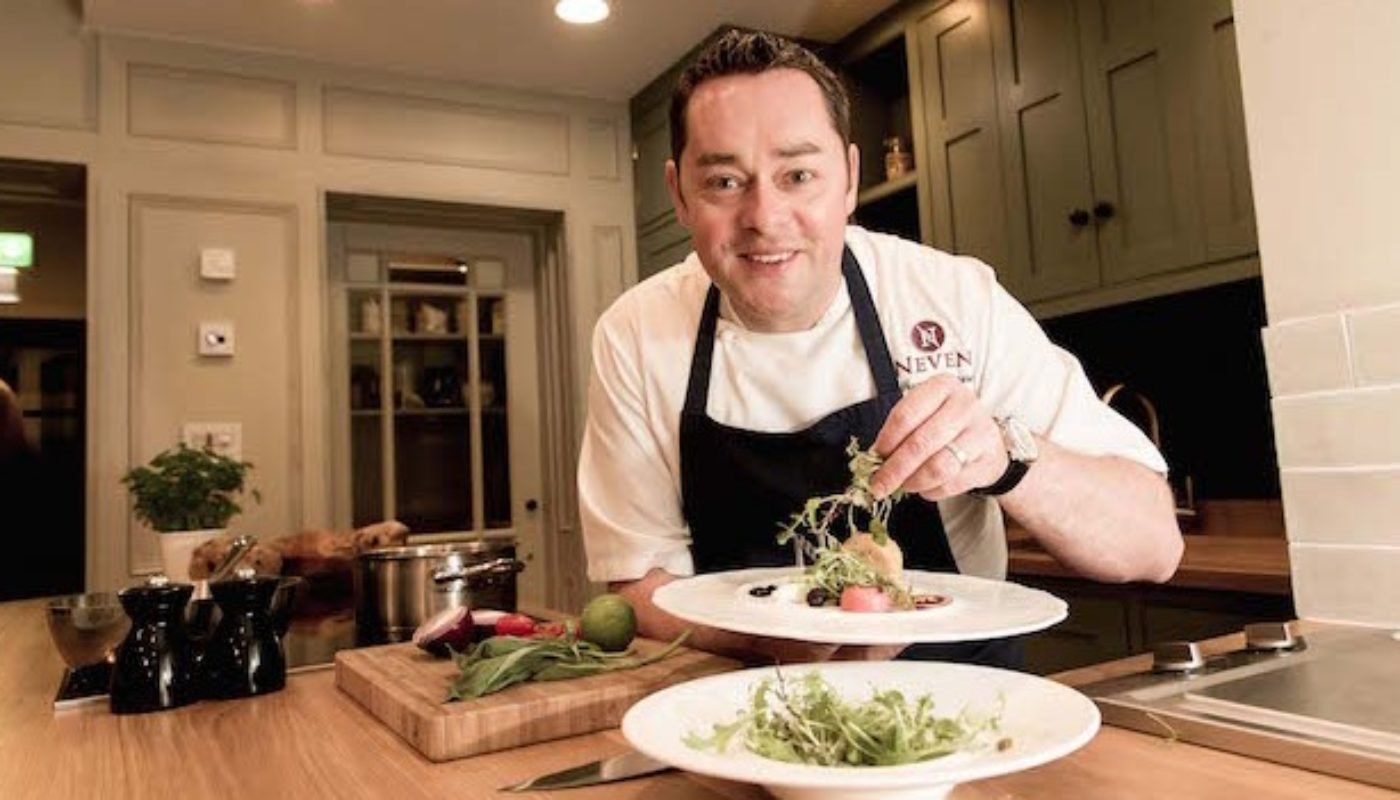 Set in a beautiful landscape of rolling hills and picturesque lakes, Blacklion is a tiny village in County Cavan close to the Fermanagh border and is home to the extraordinarily popular MacNean House & Restaurant owned by Neven Maguire – chef, cookery book author, television host and champion of Irish food and producers. In 2014 Neven realised a lifelong ambition and opened his own Cookery School; a place where he could share his enthusiasm for and knowledge of food and cookery with the aim of getting more of us into our kitchens cooking! Located beside the restaurant in Blacklion, there are a number of courses on offer at the school and definitely something to suit everyone irrespective of age or cooking ability.

Courses on offer include the half day Parent & Child cookery course with full day courses on Summer Entertaining, Cooking for Friends & Family and Christmas Made Easy, amongst others. A two day Home Chef course is also available and was the one that I decided to attend, using the two days away as an excuse to stay overnight in the MacNean House accommodation!!!

Some people idolise actors or pop stars but I go weak-at-the-knees for famous chefs and as such, I will admit that I was a little star-struck meeting Neven for the first time! Managing (probably not that successfully) to retain some level of composure, I joined the rest of the class, who had arrived before me. Classes are kept deliberately small with no more than ten or twelve participants. As a result, not only is there great camaraderie within the group but the small numbers mean that you really have the chance to get stuck in and cook everything yourself without feeling cramped. The kitchen is beautifully decorated in grey and muted green tones and has every mod-con that you could possibly want during the course. Induction hobs are fitted in the kitchen and even after only two days using them, I am converted and WANT one!

Neven demonstrates each dish first, giving you plenty of tips along the way including useful suggestions on alternative ingredients that can be used. Booklets of all the recipes covered over the two days are distributed but Neven is on hand at all times to answer questions and offer guidance. Ably assisted by the wonderful Claire and Olivia, all the ingredients are weighed out and ready, so that you can get straight down to cooking but you still prepare your meats, vegetables and practice your knife skills and other cooking techniques along the way.

We cooked in pairs, each having a work station, hob and oven to ourselves with each duo making the decision on how to divide the various tasks involved in making each dish. During the two days, we baked breads and pastries, made soups and sauces and cooked an astonishing array of starters, main courses and desserts. Lunch on both days consisted of dishes that we had cooked ourselves, washed down with a glass or two of wine.

The first dish that Neven demonstrated to us was his Kaitafi Prawn Salad but this was only the beginning. During the two days we also made Vietnamese Chicken Salad, Braised Pork Belly, Gratin of Hake, Duck with Creamed Cabbage & Sweet Potato Fondants as well as Pear Frangipane Tart, Lemon & Passion Fruit Posset with Macerated Berries, Chocolate Truffles and many other sauces, breads etc. We all found making the sugar cases for our possets great fun, if more difficult than we initially thought and couldn’t understand how Neven made it look so easy!

To say that the Home Chef course is only about cooking would be inaccurate. In the afternoon on the first day, we were treated to a Wine & Cheese Tasting delivered by Blaithín, the restaurant’s highly experienced Sommelier. Sitting on the veranda behind the Cookery School on a heavenly summer’s day, it really felt as if life couldn’t get any better! I found the tasting session very informative and learnt some very interesting things.

On the second day, we were given a tour of the gardens by Kevin, who grows and tends to the plants, herbs and vegetables many of which are used to supplement ingredients used in the restaurant. We also visited the restaurant kitchen; where under Head Chef Glenn Wheeler a brigade of chefs was busy at work preparing the food prior to that night’s service. I was mesmerised by the amount of work and attention to detail that goes into preparing dishes for a fine-dining menu, so to get a glimpse of life behind the scenes was fascinating.

The course is relaxed, informal and tremendous fun. Neven speaks fondly about his family and in particular his wife Amelda and their twins Connor and Lucia. Perhaps unsurprisingly, as he comes from a large family, you really get the sense that, for him, food and cooking are very much about a sense of community and showing your love for those closest to you. This may sound rather hackneyed in this cynical old world of ours, but all things considered, it’s not a bad philosophy; food certainly has the ability to bring people together!

Neven wants to give participants a culinary experience to remember and I can truly say that this is one of the best cookery courses that I have ever been on. Given the amount of dishes you cook, the Home Chef course is intensive but you never feel stressed or harried. Although I would be an enthusiastic and fairly experienced home cook I still learnt so much and, over the two days, made dishes that I know will become mainstays in the cooking I do for my family.

The Home Chef course was one of the most enjoyable things that I have ever done and I would strongly recommend it to anyone. At €495 for two days, it may initially seem like a whack of money to pay but all the ingredients are provided, you learn so much and most importantly you have great fun. I felt that it was worth every cent and I genuinely believe that there are few people who would come away disappointed after the two days.

Everything that you make and don’t consume on the course is packaged up for you to bring home when leaving. It’s not an exaggeration to say that my car was packed full of tasty treats which my family and I feasted on over the next few days! Amongst other things, each of us was also given a bag containing an apron, some Donegal Rapeseed Oil and a choice of any one of Neven’s cookbooks which he signed and personalised for us.

A memorable experience and who would have thought that two days cooking in County Cavan could be such great fun?