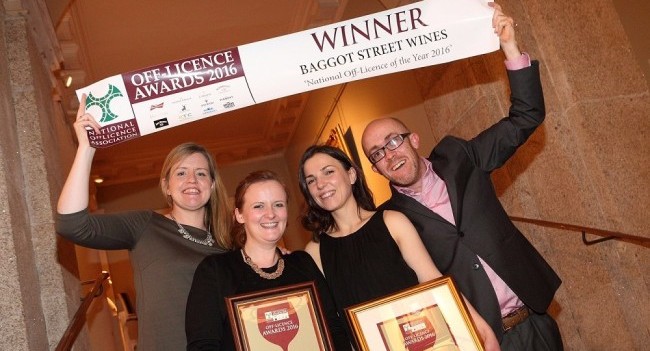 The National Off-Licence Association (NOffLA) has called on the Government to introduce the Public Health (Alcohol) Bill. The call was made at the annual Off-Licence of the Year Awards 2016 which took place last night at the Honorable Society of King’s Inns.

Speaking at the awards, NOffLA Chairman, Gary O’Donovan said, “As responsible independent retailers, NOffLA welcomes the Public Health (Alcohol) Bill as it ensures the highest standards around the purchase and consumption of alcohol. The introduction of minimum unit-pricing and affordable structural separation will ensure that alcohol is retailed responsibly. We urge the Government to progress the Bill through its various legislative stages so its benefits can be realised in communities across the country.

“However, we believe that in order for minimum unit pricing to be truly effective, the Government needs to introduce a ban on the below invoice cost selling of alcohol. The promotion of branded discounted alcohol is used as a means to drive footfall into multiples to sell other more expensive grocery products and actively encourages irresponsible retailing which is a threat to the broader community through alcohol abuse and anti-social behaviour.

“As we celebrate the best that the industry has to offer, it is also important to remember that independent businesses are still operating in very challenging circumstances despite the much talked about economic recovery. Excise duty levels were introduced during the economic crisis as an emergency measure and we are still paying for it today. This needs to be addressed if we are to play our part and fully contribute to and partake of the ongoing recovery.”

The awards recognise and showcase excellence in the off licence sector. The awards highlight those retailers that offer exceptional service to customers and demonstrate excellence in retail standards.

All 38 finalists were awarded certificates of either Merit or Excellence and a Customer Service Award based on their performance and other awards on the night included: