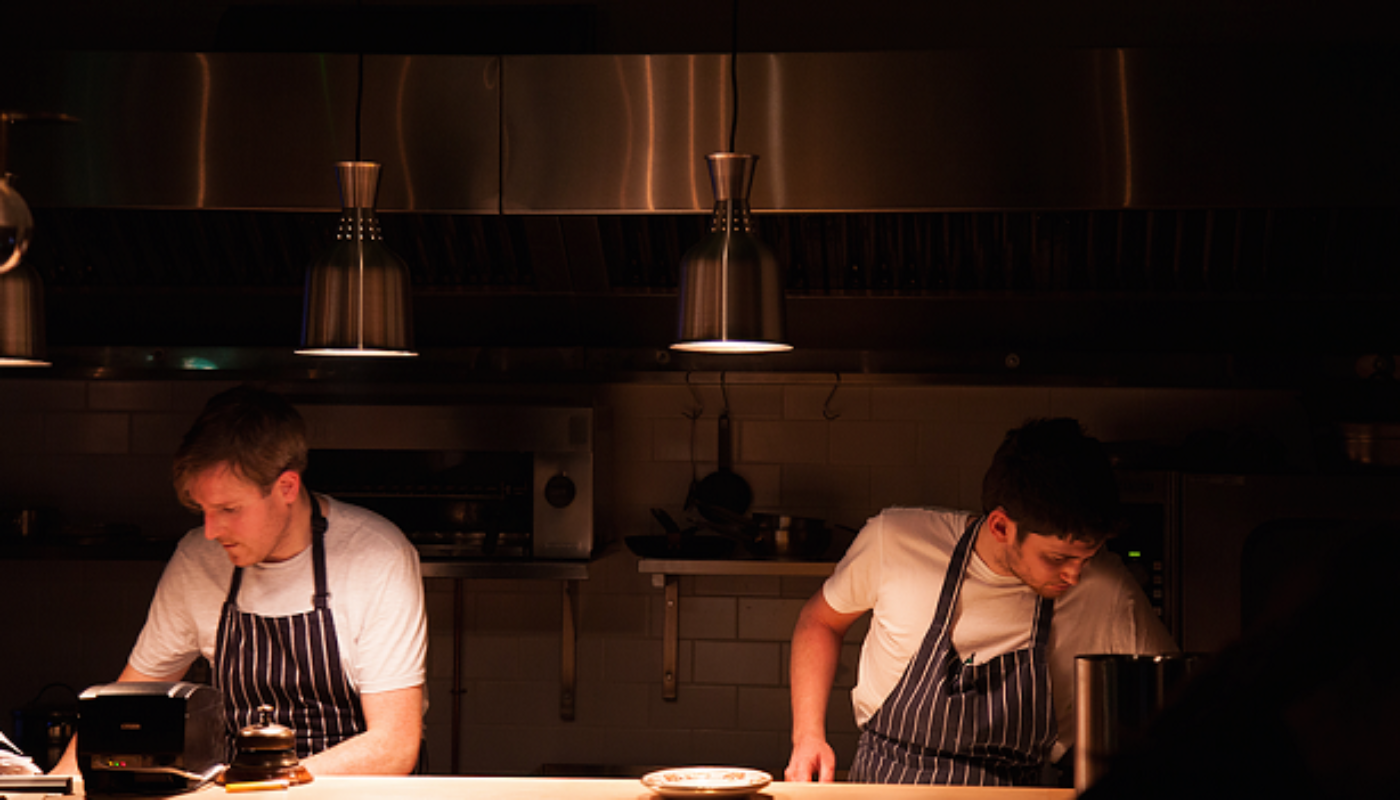 Although Bastible has only been open a few short months, it has certainly made an impact on the Dublin dining scene, garnering rave reviews for the food on offer under Chef/Proprietor Barry FitzGerald.

The restaurant is situated deep in the heart of Dublin 8 at Leonard’s Corner on the South Circular Road. At first glance, this busy junction may not seem the obvious location for a restaurant but this has not deterred diners who have been flocking in their droves to eat there. Curious to see whether all the plaudits were deserved, I recently managed to secure a table for an early evening dinner and despite battling through wet and windy weather conditions to get there, I was looking forward to my meal.

The dining room in Bastible is compact but has been cleverly designed to create a feeling of spaciousness. I particularly liked the subtle nautical theme, which thankfully hasn’t been overworked to seem contrived. In line with current restaurant trends, Bastible has an open kitchen and it is from here that Barry FitzGerald works his magic preparing food for eager diners.

Seated in an intimate alcove we happily sipped on cocktails as we perused the menu and nibbled on the excellent Warm Sourdough Bread & House Butter. My Dublin 8 Negroni made with Punt e Mes Vermouth, Dubonnet & Lillet Blanc – an aromatic French wine usually served as an aperitif – was particularly good and a lovely way to whet the appetite. In a similar vein, Paula’s Aperol Spritz was a lively offering which was light on the palate and also delicious.

The menu in Bastible is brief containing three starters, three mains, four desserts (including a cheese option) and a ‘daily special’ main course. A good range of dishes is available and whilst on one level the choices offered would be challenging to a conservative diner, I felt that the menu was well thought out and made good use of ingredients that are slap-bang in season. Whilst we waited for our starters to arrive we devoured some terrific Homemade Crisps which were everything good crisps should be… well-seasoned, full of potato flavour and CRISP! The accompanying Smoked Trout Dip with its velvety texture was the perfect foil to the crisps. A salsa verde made from chervil, parsley and capers completed the dish, cutting through the richness of the smoked trout.

My starter of Smoked Carrot, Fresh Cheese, Chervil & Spelt was a beautiful looking dish which really showcased this most humble of root vegetables. Thin baby carrots were smoked gently to highlight their inherent sweetness and were then served alongside wafer-thin slices of lightly pickled carrot draped on a pillow of fresh soft cheese. The subtle lactic tang of the cheese imparted a wonderful freshness whilst spelt added body without detracting from the flavour of the carrots. This was such a clever dish and one that I will remember for a long time.

Paula’s Veal Sweetbread, Potato Butter & Roasted Onions would have been so easy to get wrong as sweetbreads require very precise cooking. Here the sweetbread had been perfectly cooked and was a joy to eat with its wonderful caramelised exterior giving way to a firm, yet tender centre. I loved its seductively mild and creamy flavour and the rich, indulgent nature of this dish. Simply garnished with some burnt onions, slivers of beetroot and the most irresistible potato butter, it was amazing.

The ‘daily special’ was beef and whilst we were both tempted, I found it hard to ignore the lure of the Partridge, Pearl Barley, Blood Sausage & Prune. I love game and tend to gravitate towards it whenever I see it on a menu. Partridge is one of my favourites and I was delighted to see it offered in Bastible. Unlike many other game birds, partridge has a mild, delicate flavour but in the right hands, it can be successfully paired with more assertive flavours. Here, the bird had been pan-roasted to perfection and was succulent to eat. It was served with chargrilled celeriac, rich fruity prunes and a flavoursome pearl barley risotto. Also included was some deeply savoury homemade blood sausage which could have overwhelmed the dish but when eaten with the partridge brought out the underlying gentle sweetness of the bird. This was thought-provoking cooking which succeeded in challenging any pre-conceived notions that I might have add about game and how it should be served.

Paula’s Sea Bass, Sourdough, Broccoli Stems & Bisque Sauce looked like simple fare but in reality it was a sophisticated dish where everything on the plate worked to highlight and accentuate the subtle taste of the fish. We both loved the fact that broccoli stems, rather than florets, were included as an accompaniment. They tasted wonderful and given that so many people discard them, we vowed never to do so again as they were truly delicious. The bisque sauce had a depth and intensity of flavour which pleased on so many levels. A garlic rouille was also included but we both felt that it was too much for the fish and wouldn’t have been missed it if had been left off. Despite the fact that neither of us were keen on the rouille we felt that overall, this was a very good dish. Moving on to dessert, we faced a huge dilemma as we found it impossible to choose between them. In the end we decided to order three to share between us. First up was a Rhubarb, Lemon Verbena & Buttermilk Pudding. This was a stunning looking dish which contained barely poached strips of pretty pink forced rhubarb on the light and creamy buttermilk pudding. In effect this was like a lighter, less-set panna cotta. A scattering of a slightly spiced crumble completed the dish and provided a pleasing crunchy texture.

The Bitter Chocolate Cream, Clementine Sorbet & Cacao was also beautifully presented. Packed full of rich flavours, this dessert was surprisingly light to eat and I regretted agreeing to share it with Paula as I wanted it all to myself. In particular, the chocolate cream looked like it might be dense and heavy but it wasn’t. A cacao tuile provided textural contrast and was delicious in its own right. This was a dessert that was designed to please and emphatically succeeded in doing so.

Young Buck, Drop Scones & Pickled Quince was perhaps the most straightforward dish of the evening but looked elegant in its simplicity. Made by Northern Irish cheesemaker Mike Thompson, Young Buck is a raw milk blue cheese that is gaining quite a name for itself. A good-sized wedge of this salty, Stilton-style cheese was presented along with some short and crumbly drop scones and a quenelle of quince paste, all of which worked together perfectly.

It is evident that there is a very passionate and talented chef at work in Bastible and whilst the hype surrounding the restaurant may have reached fever pitch after it opened, it’s not hard to see why as the food and cooking are incredibly good. Most importantly, you really get the sense that Barry FitzGerald is a chef who is proud of his roots and that he wants to share his love of Irish ingredients and food with all who dine in his restaurant.

Service throughout our meal was relaxed but attentive and in keeping with the atmosphere of Bastible as a whole. We felt that the meal was competitively priced with two courses for €32 or three courses for €38. I shall definitely return.