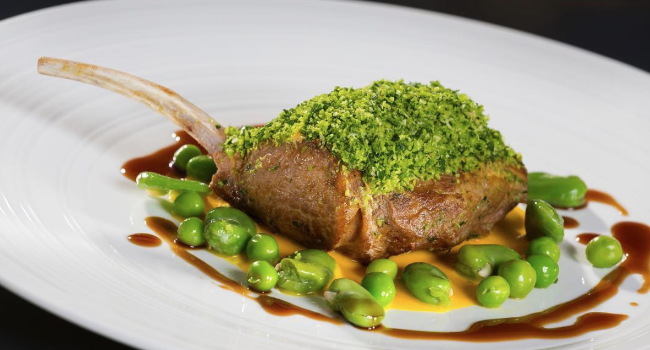 There are few people who have passed through the impressive doors of The Meririon Hotel that wouldn’t admit to having a soft spot for this five star location in one of Georgian Dublin’s finest settings.

So when news came of a multi million euro investment in the hotel and a complete redesign and rebrand of the renowned Cellar restaurant, many an eyebrow was raised as to whether all these dramatic changes would alter what people has grown to love about Head Chef Ed Cooney’s cooking.

We popped in last weekend and were amazed at how well the new glass walkway, which connects the main building to the new Garden Room and garden wing, looks and it is sure to prove a massive draw in the warmer months. 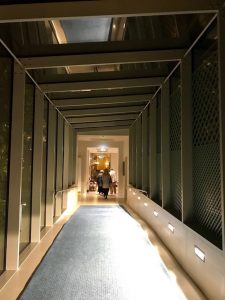 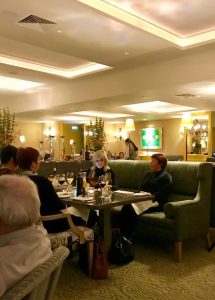 Dining in December however means the floor to ceiling concertina glass doors remained closed for our visit. Instead, seated at the window, we could people-watch guests coming and going and enjoy the Damian Costello designed illuminated landscape.

The Garden Room is a far more inviting space than the Cellar ever was, with less formal table setting and softer tones all reflecting the botanical nuances that are now central to the redesign.

Cooney’s limitation with space in the kitchen has heavily influenced the menu, with far more accessible options now listed such as his Gourmet Beef Burger with garden room chips (€18) or the Garden Room Fish and Chips with Minted Mushy Peas (€24) However fear not, because you cannot have chefs with the calibre and experience of Ed Cooney and Paul Kelly, who you may recognise from “Great Irish Bake Off” and not have a few surprises on menu.

Although many dishes are more affordable than you might imagine in a five star location such as The Merrion, no compromise on quality or imagination seems evident, quite the opposite in fact.

As we looked around the room it was interesting to note many diners were not hotel guests, The Garden Room has the potential to become one of those iconic meeting places where long last pals rekindle friendship over a good bottle of wine and some Kelly’s oysters. We began our Garden Room adventure with a tastefully presented and perfectly trimmed Tartare of Irish Rib Eye (€12.50) which served up quite a spicy little kick thanks to the dash of hot sauce, topped off with a simple quail egg. As people who devour an abnormal amount of tartare, this is one well worth seeking out. 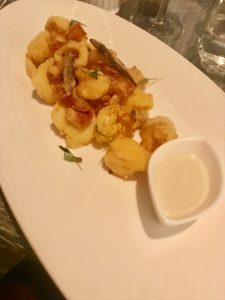 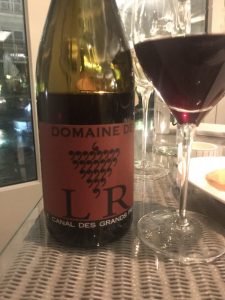 Our second starter was slightly more disappointing on presentation but you don’t expect to find a pretty Fritto Misto (€12.50), it was however well cooked and lightly battered. The calamari, octopus and prawn were fresh and flavoursome but next time the scallop and tuna ceviche will be getting its day in the sun. Mains consisted of a cracking Loin of Kilkenny Veal (€30), served in two perfectly pink chunks with a sprinkling or orange pepper dust, Jerusalem artichoke puree, a smearing of sage veloute and a deliciously crisped salsify acting as a centre piece. Across the table sat an equally tempting Herbed Rack of Lamb (€30), if there is one dish that really embodies the “Garden Room” theme this is it. The succulent and tender meat sat atop a veritable garden of broad beans, peppery green herbs and peas – a simple alliance between contemporary and classic.

Desserts are bound to be where The Garden Room will excel given that they happen to have Paul Kelly, one of the country’s top pastry chefs at the pass. With that in mind we decided it would be a sin to skip dessert given the many heavenly options such as Anjou Pear Cake with Champagne Cream and Lemon Posset with White Chocolate Snow and Lavender, both €12. Instead, on our server’s recommendation, we opted for the Salt Caramel Tart (€12), a decadent disc of dark chocolate crumble and creamy caramel with some popcorn ice-cream throw in for good measure. A happy ending to a great evening, the way all the best desserts should be.

It’s hard to dislike anything about The Garden Room, when you eat in a five star location the bar is immediately raised and expectations are definitely heightened but there is something uniquely different about what has been created here, it encapsulates a trend that has swept the Dublin dining scene – casual dining with high quality dishes. No fuss, no formality, good honest dishes in a setting that is sure to please most palates.

The Merrion’s General Manager Peter McCann and his team have created something very memorable with the Garden Room, it’s a truly beautiful dining space and anything but a case of style over substance.