Modern Food Bathed in History – Jacobs on the Mall Review 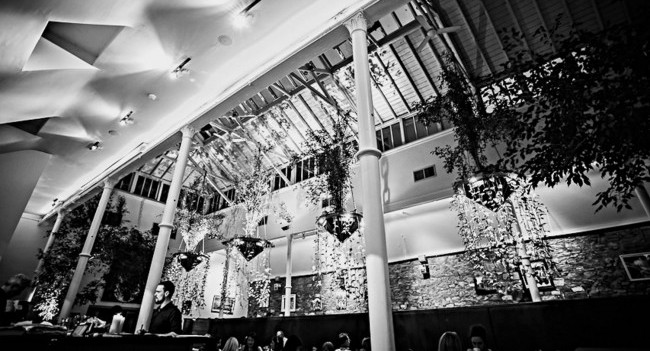 Those familiar with Cork’s South Mall will know it best as the financial centre of the city, with accountant’s and solicitor’s offices flanking both sides of the broad street. However, the street also boasts some of the finest hospitality in the Southern capital. None more so than Jacobs on the Mall. Jacobs on the Mall is a 130 seat contemporary style restaurant that has a reputation for serving modern Mediterranean style food, with an emphasis on locally sourced, free range and organic products. However, Jacobs is an example of a restaurant where the venue is as attractive as the menu. 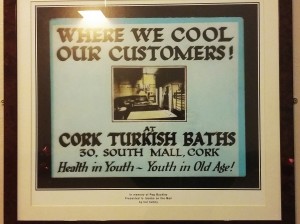 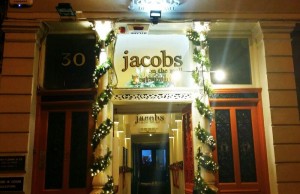 Originally the home of ‘Alf Jacobs’s Cork Turkish Bathhouse’ which opened the late 1800’s, the first thing that strikes you on entering the dining room is the skylight that runs the entire spine of the high vaulted ceiling. As impressive as this is at night, I can’t help but think how beautiful it must be to dine here in the brighter Summer evenings. However, on this occasion the enormous, overflowing hanging baskets and cast iron pillars were heavily drizzled in Christmas lights giving the room an equally charming festive sparkle. As we settled into our comfortable bucket seats, still captivated by the architecture we quizzed our friendly server Jack about the building’s history. He explained that the dining room was once a ‘cooling room’, maintained at 60°C, and featured a 26 foot oval plunge bath. Since it’s heyday as a Victorian bathhouse it has been everything from a Polio clinic in the 1950’s, to a call centre, becoming a restaurant in the 1900’s.

We then turned to satisfying our appetites for something other than history.  My dining partner chose from the reliable À La Carte, while I took the road less traveled; the Vegan Menu. Although the Early Bird too was generous in both range and value with three courses for €25. As we took our time over the various menus, we nibbled on a selection of breads; sun-dried tomato & basil white soda bread and black pepper brown soda bread. The latter a flavour combination I will definitely be applying in future bread making endeavours. 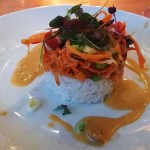 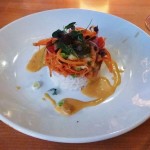 In an efficient and relaxed manner, a standard that was maintained for the rest of the meal, our starters were served. My Thai Style Vegetable Satay with Coconut Rice was delicately plated; a round of rice, piled high with a nest of thinly sliced carrots and red bell peppers, dotted with chopped scallions and micro herbs. The dish was brought together with a swirl of silky satay sauce, and the odd whole roasted peanut that added a crunch as well as an extra punch of peanut flavour. The texture and creaminess of the coconut rice evoked memories of my mother’s rice pudding, a comment to be taken only as the highest of compliments. I would have happily eaten a larger portion of this as a main course.

My dining partner’s Pulled Pork on Focaccia arrived with homemade red cabbage slaw, and, for balance, some leaves. A sticky, spicy glaze coated the pulled pork and the same sauce was generously smeared across the plate. Jack informed us that the recipe was based on a classic Southern American BBQ sauce, and it’s authenticity was achieved with a combination of over 15 ingredients. My companion just about refrained from requesting another slice of focaccia to wipe up the last of this sauce that darkly tinted the white plate. 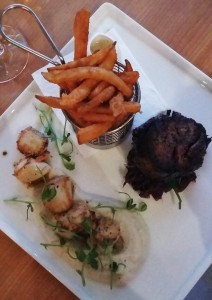 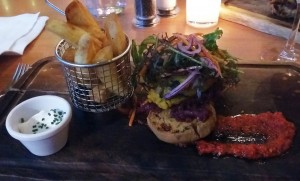 Indulging in my cravings for another American classic, albeit a vegan version, I chose the Jacobs Chickpea and Kidney Bean Burger, served with a side of thick-cut chips. Vegan patties are often struck with the same issues that regular burgers fall down on. However, this version retained it’s moisture and shape, with texture added by the single crisp bun and mixed salad. A lightly spiced sun-dried tomato puree and a sweet red onion marmalade brought welcome hits of flavour. The Jacobs Surf and Turf that my dining partner ordered was his first taste of the classic steak and seafood combination. His 8oz Irish fillet steak, well done as specified but still tender, came on a bed of red onion marmalade and spinach. The pan seared scallops, crisply browned at the edges, sat neatly atop a creamy cauliflower puree, that had a hint of horseradish. There was a  salty blue cheese sauce brought the yields of the sea and land together well, and that served as a delicious dip for the accompanying crispy sweet potato fries. 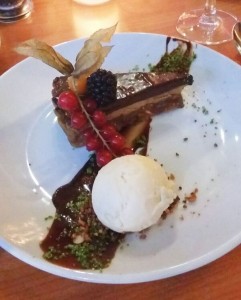 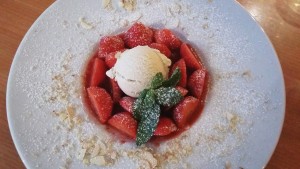 Haling from Cork, I chose a patriotically red and white dessert of Rosscarbery Strawberries with Vanilla Ice Cream. Although a classic and simple combination it was elegantly plated; rows of neatly placed strawberries stood in a strawberries sauce, encircling a single scoop of vanilla-seed flecked ice cream, with a dusting of icing sugar and slivered almonds coating the edge of the bowl.  My partner went a decidedly more devilish route choosing the deluxe Peanut, chocolate and Caramel Tart. The crisp tart base of this slender wedge was layered with peanut speckled layer of salted caramel, a creamy peanut butter mousse and a chocolate ganache. It was quickly inhaled along with a slick of chocolate sauce and a scoop of vanilla ice cream.

Though the Turkish baths have long since disappeared, in it’s reincarnation as Jacobs on the Mall the building has once again become a place to relax with good company, albeit in somewhat cooler surroundings. Today Jacobs on The Mall also treats guests to a creative menu, the very best of ingredients and stylish presentation, features I am sure the Victorians would have warmly welcomed.

Erica grew up with a baker and confectioner for a father, and a mother with an instinct and l  love for good food. It is little wonder then that, after a brief dalliance with law, she completed  a Masters degree in Food Business at UCC. With a consuming passion for all things food,  nutrition and wellness, working with TheTaste is a perfect fit for Erica; allowing her to learn    and experience every aspect of the food world meeting its characters and influencers along the  way.