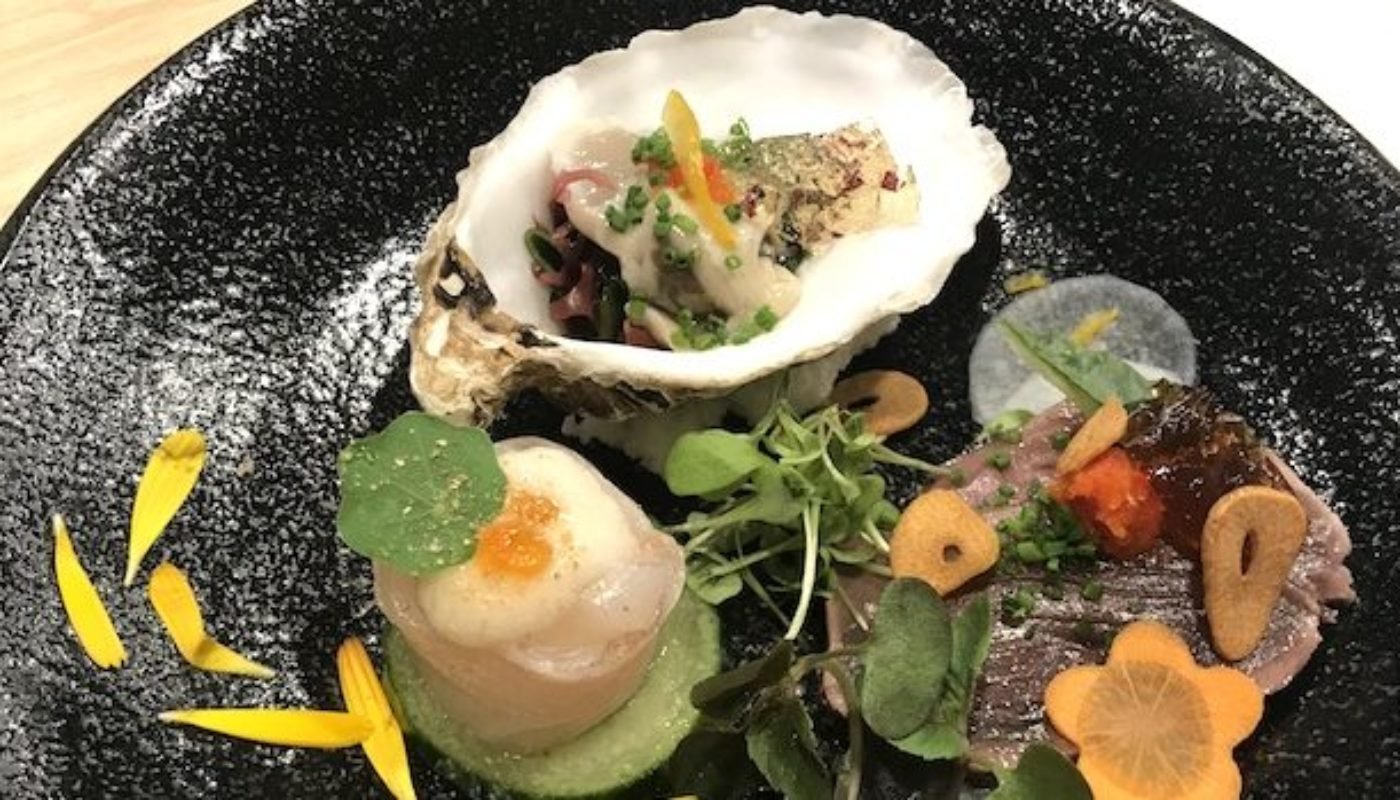 Unforgettable Dining Unlike Anything Else in Ireland – Ichigo Ichie Restaurant Review

The last time I saw Takashi Miyazaki, he was just after completing a screen test for RTE Today in their Cork studio, cool, calm and far more collected than myself. It was both an honour and a terrifying prospect to follow such an act, with his tiny Barrack Street eatery Miyazaki having gained almost hallowed status amongst food lovers across the country.

Propped up at a glistening wooden counter lined with bowls of dashi, kombu and sansho pepper, our next meeting would take place in the serene and soothing space Miyazaki has dubbed Ichigo Ichie  – “a once in a lifetime experience.” Dark and unassuming on the outside and almost spa-like within, the restaurant formerly known as Fenn’s Quay bears no resemblance to its past, or indeed anywhere else in Ireland. Having battled to secure a reservation, I ditched the notion of a dining companion in order to snap up the last available front row seat at the Kappou Counter and never once regretted my decision.

From the moment I arrived (on time, as tardiness is the height of disrespect in Japanese culture) to the moment I left, I was enveloped in the warmest hospitality, from hostess Flavia and server Ria to anecdotes, tips and tales from Takashi himself. In the dining room around me, groups of friends raise saké toasts, it is a distinctly young crowd and everyone is eager to peer through the window into Japanese cuisine that Miyazaki has created in this windowless oasis. This is a space fit for dining at its finest, minimalist and leaving the artwork to the plates.

Indulging in a sour and lip-smacking Umebeshi Plum Saké (€17.50) painstakingly sourced by Takashi to start, the procession of the Kaseiki, the Japanese multi-course tasting ritual which was traditionally reserved for royalty, begins with an unassuming but captivating amuse of Tofu whipped with dashi poached rhubarb.

The presence of rhubarb sets the tone for the prevailing theme, Japanese innovations elevated with Irish ingredients, like Takashi’s subtle Corkonion lilt, plated. He mentions rhubarb is unheard of in his native cuisine and he had never even cooked it before he moved to Offaly eleven years ago, but the sharpness it imparts feels instantly classic here. I’ve never been so annoyed with my lack of dexterity – featherlight whipped tofu, like a vegan fermented ricotta, is not easy to scrape up with a chopstick but it was worthy of the indignity, toasty with hand ground white sesame paste.

Next, Nigiri of silky marinated tuna with aged soy sauce foam cemented my inability to settle for sub par sashimi going forward, alongside barely solid scallop sashimi topped with a fireball of Yuzu Kosho. This explosively zesty salted green chilli and yuzu paste is certain to dethrone Sriracha in the cult condiment stakes once the word gets out. The aforementioned awkwardness again blighted me in attempts to demolish Asparagus Tofu, as I wondered how there could be so much flavour in something so fleeting on the tongue texture-wise, topped with creamy Onsen egg yolk and salted cherry blossom.

A petite side of Mackerel delicately wrapped in wakame salted cucumber was my kind of roll – refreshing, textured and rice-free to allow the freshness of mackerel to shine.

For me, however, the star of this trifecta was Cavan’s Thornhill Duck cooked in red wine and soy. Shaved to wafer thin slices of both breast and gizzard, the surprising sweetness of the latter stole the show with a sprinkling of salty soy pulp and a smattering of smokey leek hay. I was almost grateful to the chopsticks for forcing me to savour each bite slowly. Traditionally in Kaseiki, cold is followed by warm, and things heat up with what looks like a stodgy dumpling but is actually a pillow of pure Castletownbere Brown Crab and shredded daikon radish, floating happily in a bath of umami liquor – a gingery bonito dashi broth.

Yet another standout component of an intricate plate of art, a lone Kombu Cured Oysterhaven Oyster crowned with wakame and bonito vinegar jelly is the happiest marriage of Irish Japanese cuisine I can fathom. If seaweed really should be our national vegetable, Takashi is giving a masterclass in how best to utilise it. A white rosette of six day aged halibut was crowned with sweet pureed yam and pearls of salmon roe, alongside Bonito Tuna, which offers a stronger, more intensely concentrated flavour of the sea than its counterparts. Mingled with ponzu and topped with crisp fried garlic chips, this mouthful reached eye-rollingly delicious heights.

Stewed Daikon Furofuke is to the Japanese what stew is to the Irish, soothing comfort food and Takashi’s personal favorite. This dish is very close to Japanese people hearts, is considered the measure of a restaurant’s quality. The versatility of daikon is again showcased in this bowl of goodness, meltingly tender and sweet, comforting yet complex, it is to the tastebuds what a lullaby is to the ears.

Both white garlic foam and flower, as well as new season onion sauce sat alongside Japanese chargrilled Ox Tongue, which proved yet again Takashi’s mastery of both land and sea.

Utilising the tender tip of the tongue only – shaved and moved deftly between 60 and 100 degrees on flame followed by luxurious resting, each slice melted like butter on the tip of my own tongue, brought to life with green chilli and salt yet again. I never expected an offal dish to have me thinking “Wagyu, who?” Next, barely set savoury Egg and Dashi Custard enveloped meltingly tender chicken thigh in a voluptuous wobble, topped with glistening red mullet as seasoning. If chicken soup is Jewish penicillin, this dish would be a samurai sword to any ailment, with intense richness cut only by the chlorophyll pop of edamame. Akadashi heralds the end of our exploration of umami, with a steaming pot of Red Miso, older, fermented for longer than its white and brown counterparts and usually reserved for special occasions, offering rich and deep maltiness, followed by the crunch and tang of in-house pickles of rice bran fermented ninja radish and wasabi root. Sticky rice cooked in dashi, speckled with shiitake and channel wrack sang of the West Cork Coast, a comforting end to a meal outside the comfort zone of most. Eschewing the traditional minimalist melon slice to end the Kaseiki, Miyazaki’s sweet note is based on the one chocolate treat they sell in his local shop back home, wafer and chocolate ganache. A sphere of chocolate delight, a Mochi Bon Bon, is the last thing we taste as our journey draws to a close. Those madcap Japanese mochi Instagram creations never appealed to me, but it seems all they were missing was a dash of whiskey, in this case Jameson Caskmates. A bit of a Cork accent goes a long way in creating a Japanese dessert you’d want to eat again and again.

Effortlessly, Takashi hand spiralizes cucumbers with a blade as he regales us with tales of pulling back on TV and cooking demo appearances to be here, immersed. Miyazaki is a man contented, albeit one with a horse voice, from playing Japanese monsters with his son, he smiles. Yet he will once again roll out the red carpet for the next sitting of diners, due to ascend as soon as we reluctantly leave. Ichigo Ichie represents Takashi’s own childhood and imagination, he tells me, anchored in Irish produce. His creativity and his heritage intermingle over a dozen dishes painting a picture of a lifetime spent mastering flavour and technique.

Realising his dream of bringing Ichigo Ichie to life here in Cork, it seems, is Takashi’s once in a lifetime experience, and we are privileged to be able to watch him in his culinary playground, a master at work creating unforgettable experiences for all who pass through.

To top it all off, service here has as much heart as the dishes presented and is as warm as a steaming bowl of daikon stew, bringing to life the core tenet of Kaseiki, “omotenashi”, meaning wholehearted hospitality. Cork, is at present, a sky without a star and if Ichigo Ichie delivers an experience like mine to the Michelin inspectors, the first may well come from the land of the rising sun.

The Kappou Counter Experience costs €95 per person, and with saké my bill came to €112.50, excluding service.