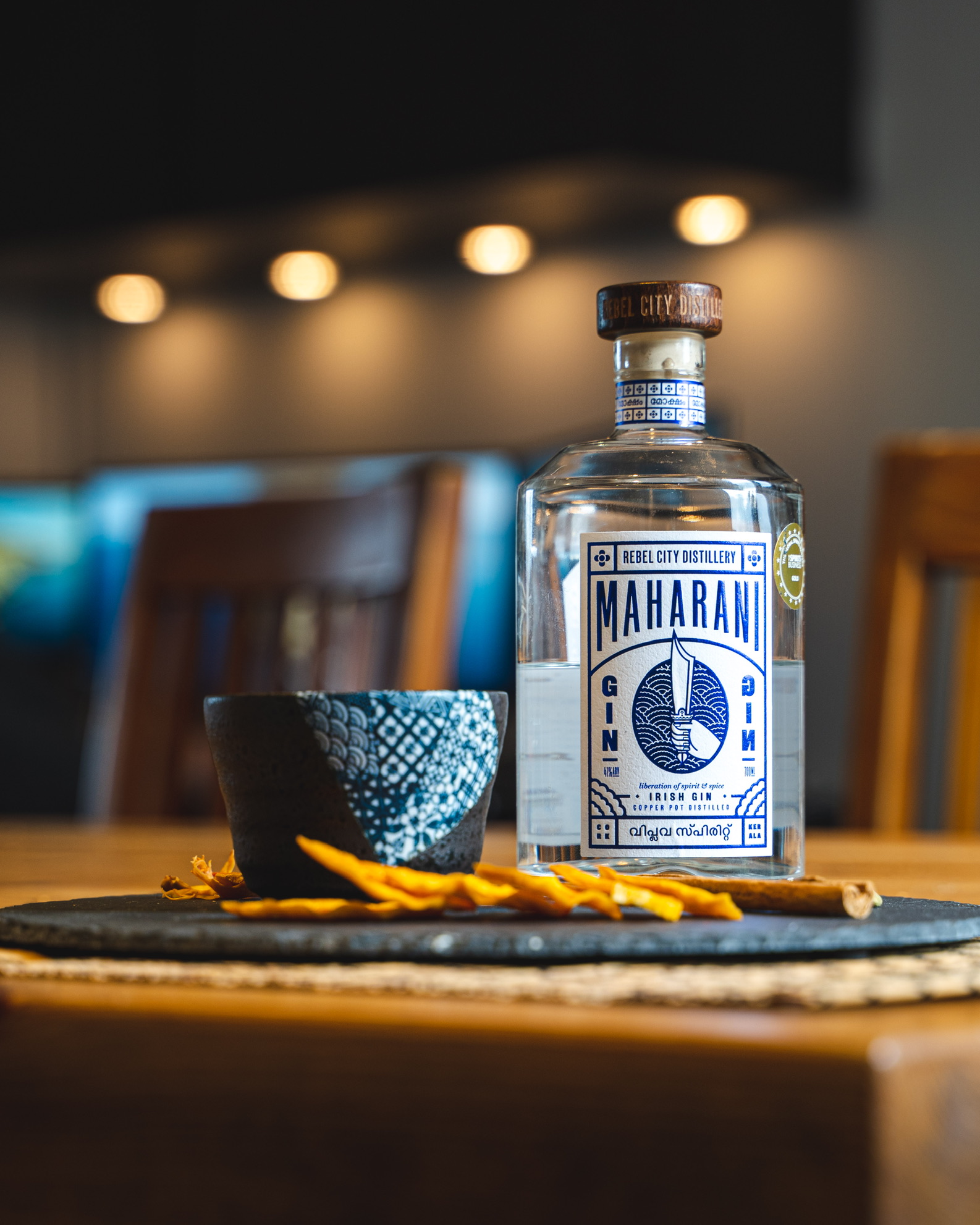 Rebel City Distillery recently ran a mixology competition to commission a Maharani Gin cocktail that reflects the coming together of cultures, a modern Ireland that embraces its roots and takes inspiration from around the world.

Made in Ireland and spiced in Kerala, India. Maharani reﬂects the unexpected connections and cultural vibrancy of modern Ireland.

Founded by Robert & Bhagya Barrett, Rebel City Distillery is situated in the heart of Cork’s historic Docklands, and will produce a range of premium spirits which draw inspiration from around the world. Maharani Gin celebrates a fusion of Cork and Keralite cultures. Robert was born in Cork and Bhagya hails from Kerala, India.

“It’s so important to us to support the hospitality trade. There are so many amazing mixologists around Ireland staying home and we want to tap into their creativity to create a new Maharani cocktail that reflects the diversity of modern Ireland.”

The winning Mixologist, Ali Hayes is head bartender in The Exchequer in Dublin City centre. “I’ve been in the industry for about 7 years now but I really go into mixology 4 years ago. Every year I’ve been building on my knowledge and trying to enter as much competitions as I could. I’ve won a few and even got nominated for best bartender at the Irish Craft Cocktail Awards in 2019. Since covid started I’ve moved into the social media side of things, making cocktail videos and posting regularly while also trying to continue learning. I was one of 6 people internationally to be chosen for the Jägermeister scholarship in 2020 and this year I’ve made it to the Diageo Word Class Ireland final. I hope to continue working with amazing brands and just overall showing people that anyone can make a delicious drink with the right instructions! I love my job and hope to travel with the skills I’ve learned once covid has settled down.”

This gin is very smooth with a lovely warm spiced note, made in Cork and spiced in Kerala, India. The idea of this competition was to try and make a cocktail that shows the diversity of modern Ireland. I wanted to incorporate as many different cultures as I could in this drink.

I was looking into the chef Asma Khan for some Indian ingredient inspiration and saw her family owns orchards back home, automatically being from Ireland I thought apples but of course she was talking about mangos. This is where I had the aha moment for naming this drink, India and Ireland being worlds apart but also only orchards apart.

I decided to do a mango coulis sweetened with some Bulgarian wildflower honey. I also dried out some pieces of mango and sprinkled a traditional Mexican spice called Tajín on top. This gives an amazing smokey and spicy contrast to the tangy mango pieces.

I wanted to include apples in some way and decided to go with Corks own Killahora Pom’O for that extremely fresh apple flavour. I was looking for an Eastern European ingredient to work with the same flavours and decided to use some Kvass, a fermented grain drink (in this case barley) adding a nice malty note. I then needed some citrus and looked at using the full flavours of a lime. I’ve always loved the Brazilian drink Caipirinha and the simplicity of it with the lime juice and oils making it a bright refreshing drink. I decided to make an oleo saccharum with the skins of the lime and also use the juice in this drink.

I have served it in a traditional Japanese tea cup and scattered some of the botanicals that are in the gin along side it such as nutmeg mace, cardamom and cinnamon. This drink is fruity and refreshing with the spice coming through nicely and working well with the spices from the garnish.