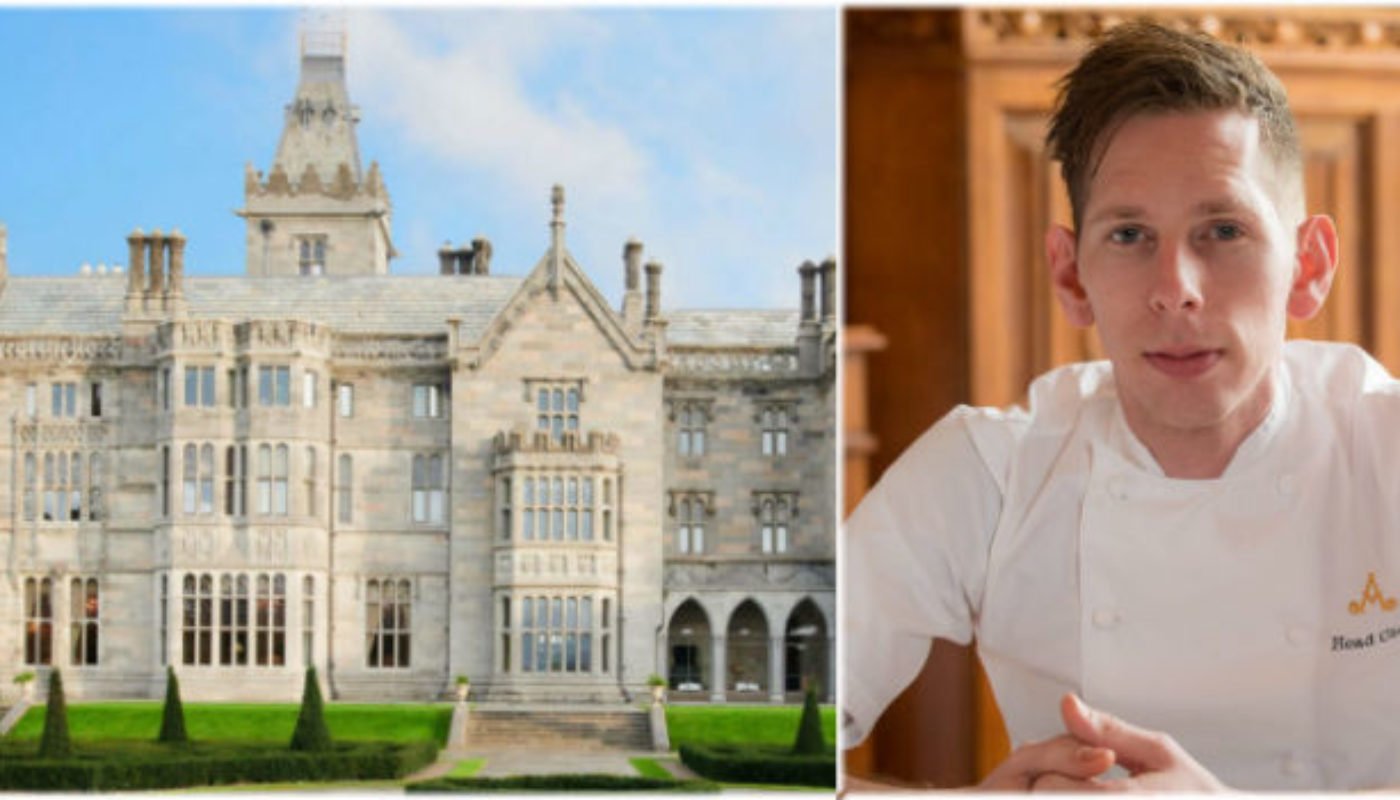 The revamp of Adare Manor has been one of the most talked-about and highly-anticipated hotel re-openings recently. Their fine dining restaurant, The Oak Room, is already a big hit with guests and the head chef, Mike Tweedie, has been impressing everyone on the plate and with his newfound Irish charm.

“I can’t say enough about Irish people and the hospitality,” Mike commented. “When I left Gidleigh Park I was your typical grumpy chef! I wouldn’t talk to anyone; I would keep my head down and not engage. Now I love talking to customers and having a conversation with them.

This country has changed me a lot. Ireland is now my home, I don’t consider England my home anymore. I am fully invested in Ireland. I love this country and I think it’s great.

Mike is originally from Devon in England and, at the grand old age of 30 years, has spent his culinary career thus far working in some of England’s finest hotel restaurants – one Michelin star Lucknam Park in Bath working with chef Hywel Jones for two years and two Michelin star Gidleigh Park working for chef Michael Caines – where he really learned what fine dining was all about. However, it was his move to Ireland that has really catapulted him into the limelight and also coincided with a much-needed change in lifestyle.

“I never thought I’d move to Ireland. The general manager of Gidleigh took the same position in Ballyfin Demesne in County Laois and he was looking for a head chef. He invited me over to see the property and I fell in love with it, the grounds and restoration of the hotel is fantastic. I ended up working there for 18 months, then went to The Greenhouse in Dublin for a short time before moving to Adare.”

“I got approached about Adare Manor by Loughlin Druhan, Director of Culinary. I previously met Loughlin in Abu Dhabi when I went out with Michael (Caines) to cook at the Abu Dhabi Festival. He invited me down to see the property and we chatted back and forth for a while and as soon as he showed me the kitchen plans, I said yes immediately.”

“With the menu in The Oak Room, we knew we wanted to be as Irish as possible, using lots of small, artisan suppliers. That was the main goal for us but, you know, you’re never going to be 100% Irish because there are some things that don’t grow in this country. We wanted to use local as much as we could and utilise the great land and food that we have in this country.

“We wanted to have good food and happy guests. We’ve not set ourselves out to achieve a Michelin star or Rosettes or anything like that, we just want our guests to enjoy their dining experience and come back and leave with happy memories of The Oak Room.”

While Mike may not have Michelin on the brain 24/7, there is no doubt that having worked at a two-Michelin standard for many years, it is hard for it not to be on his mind, sometimes. “It’s always in the back of your mind I guess,” he said.

If you had asked me if I wanted a Michelin star when I started in Ballyfin I would have said yes, but now I think my mentality has changed. As I’ve gotten older, I want to enjoy cooking. I think I cook better now than I did 18 months ago and it’s because I am not putting myself under the pressure of – I have to cook for Michelin and be within the guidelines.

“Now I just cook what I want to cook and as long as it’s tasty, it looks nice and the guests are enjoying it, then for me that’s enough and that’s what I want. I am really not that worried about awards any more. I am not saying if I win something I wouldn’t want it, but at the moment the most important thing is to get a full restaurant, a good reputation for good food and enjoyable company.”

Mike’s reputation goals for Adare Manor seem well underway and his passion for ingredients and cooking is certainly evident in every dish. “I have always been good at cooking and cooked with my mum from a young age. My older brother Alex is actually a chef too and I went to work with him and, like most chefs, I started as a kitchen porter.

“I fell in love with food there and my brother trained me. I left school at 15 years old and went into the kitchen and worked with him for two years. My brother is based in France in a hotel now. We are like chalk and cheese. He’s a great chef though and I owe him a lot; he started my career and he’s the one that got me into food and put me in the right direction.”

“I come from a big family; we’re a family of five children and my mum and dad. My mum does a lot of cooking and she’s a very good baker. That’s what we used to do together, bake different things – flapjacks were a favourite. It was nice to do that with her.”

“Mum has become an even better cook now – she has finally learned how to cook beef medium-rare, instead of well done!” he laughed heartily. ‘I’m joking of course. My mum has been a big influence to me and other family members too; there are a lot of chefs and bakers in our family.” Mike’s new work family, the team at Adare Manor, have certainly benefitted from his way of thinking. “I think it’s really important now to have a work-life balance. As I am getting older I have realised I don’t want to spend 15 hours in the kitchen anymore. I want to spend time with family,” Mike explained.

“I just look after The Oak Room and I have my own little team. I have 11 in my brigade including me. I said ‘little team’, but it’s not actually that little!” he laughed.

“I really try to give my guys a 40-hour working week. My guys don’t start until 2pm each day and they finish by 11pm-midnight, depending on the last table. We really do try and work the guys to a 40-hour week and try to stick as close to it as possible.”

“We don’t want our chefs burning out and people come in with a lot more creativity and awareness, rather than coming in tired and half asleep. I’ve been there, I know what it’s like and I understand, more than anyone, how much it takes on your body.”

While Mike was working in The Greenhouse in Dublin he became ill and his time there was cut short to just a couple of weeks. “I just got really ill,” he recalled.

I have Type 1 Diabetes, so the hours and work were too much for my body. I had to make a decision whether to put my career or health first and I chose my health. Mickael was so supportive and very understanding and I can’t thank him enough for that.

“I have been diagnosed eight years now. I found out when I was working in Lucknam Park. It was really bad timing actually because the executive chef and head chef were off, so I had to work, but I knew something was wrong. I was so thirsty all the time and I couldn’t keep any food down. I went to the doctors and they told me that I had Type 1 Diabetes.”

“It was a big shock! Normally diabetes is in the family but there is none in ours. The doctor told me I had more of a chance of winning the lottery than I did of just getting diabetes. That’s just the cards I’ve been dealt in life though and you just have to get on with it.”

“It is hard with my line of work. There are a lot of good and bad days. I am not the best at monitoring myself. I am constantly eating as well so it’s very hard to monitor my diabetes. When I was first diagnosed I thought I would never be able to cook again or do my job the way I want to do it and I’ve had to make lots of adjustments, but I am making it work. I am not going to lie, it is difficult.”

“There are implications of when you have high blood sugar levels, you can get mood swings and be a bit aggressive. I’ve had to learn to really try and control it and if I feel like I’m getting a bit high to take insulin and try and control it the best I can in the situation I’m in. There are lots of other people that get diagnosed with way worse stuff so you have to just get on with it.”

“There is no point in hiding from the fact that I have diabetes and there is a lot to be said for the hospitality industry and how we deal with things like this and how we approach stuff. Mental health is another one that a lot of chefs have touched on and I think you have to speak up when you have to speak up.”

“On the positive side of things, when a diabetic comes into the restaurant I can advise them on what they can-and-can’t-have on the menu or I can make something specifically for them. Chefs can be very proud and some almost want to be seen as having no weaknesses, but we all do!”