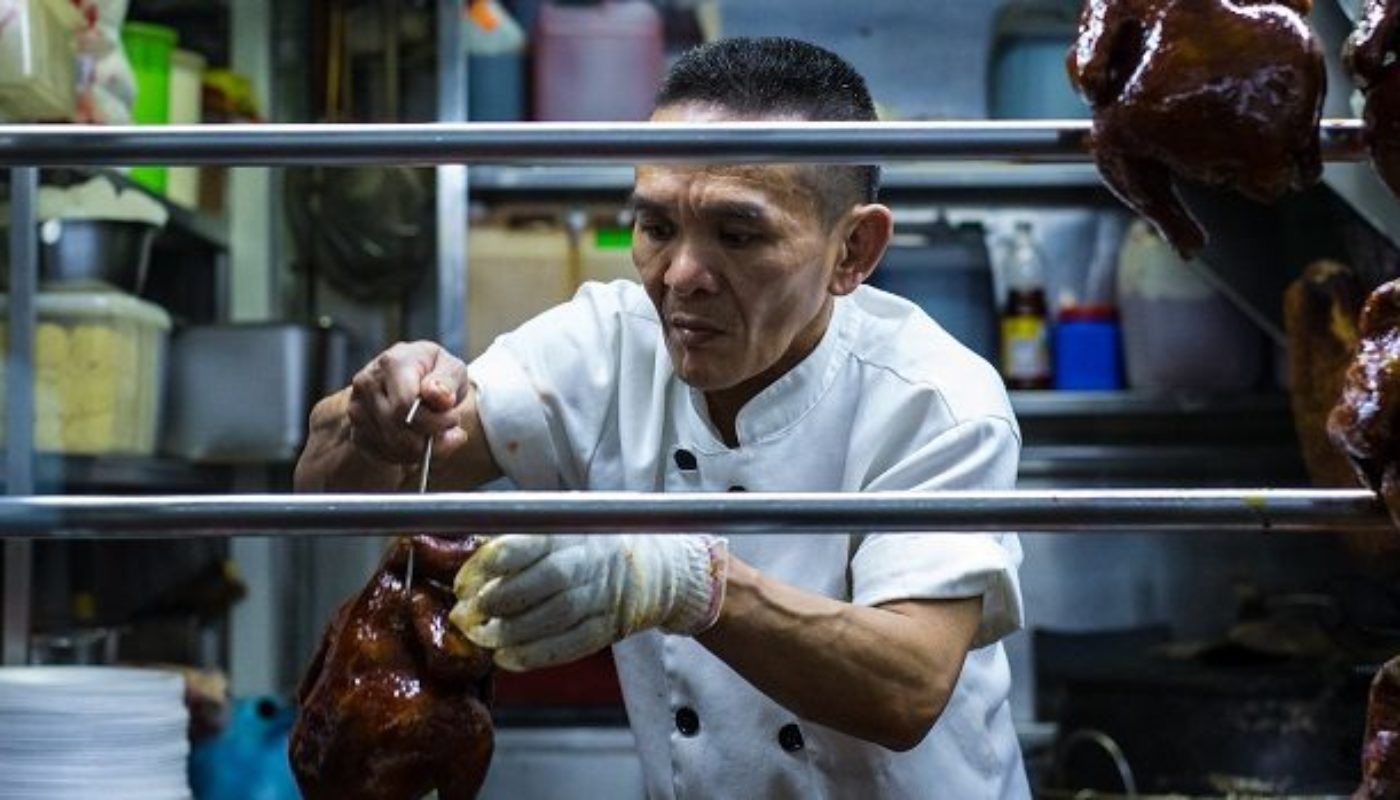 When Heron & Grey, in Blackrock Market, Co Dublin, was awarded a Michelin star in October 2016, it caught headlines not only for becoming Ireland’s latest addition into the prestigious guide but also for having more stars than it did toilets.

But really Michelin’s move to reward an eatery for the quality of their food despite humble surroundings shouldn’t have come as quite as much of a surprise following the groundbreaking induction of a street food stall into Singapore’s inaugural Michelin Guide in July 2016: Liao Fan Hong Kong Soya Sauce Chicken Rice & Noodle. Heron & Grey now has its very own facilities, if that ever even mattered to you, and things have changed for Chan Hon Meng too and the news that Dublin diners will get a taste of Chan Hon Meng’s iconic chicken rice dish this week suggests just how dramatic that change has been.

At the now sold out Tiger Street Eats, a pop-up event at Portobello Harbour which kicks off this Thursday, July 20th and runs until Saturday, Chan Hon Meng will unveil a three-course menu that has been specially curated to serve as the perfect accompaniment to an ice-cold Tiger Beer.

Catering to the demand for Michelin starred street food, Chan’s collaboration with Tiger comes after the chef began a collaborated with Hersing Culinary last year that has resulted in a casual dine-in offshoot Hawker Chan, the first of which opened just meters away from his original stall but since has grown to a family of six restaurants in Singapore and abroad.

We chatted to Chan Hon Meng about where it all began, how things have changed and what we can expect at Tiger Street Eats.

What sparked your interest in food?

I have been cooking for my family and parents since growing up in the farm plantation as my parents were are out working. I feel that food is a luxury to have. I became a chef wanting to bring joy and happiness to those who love my food. I opened my stall eight years ago, in 2009.

Did you ever dream you would achieve a Michelin star?

No, I never expected Michelin to award Hawker stalls. I only thought Michelin give out these awards to hotels and fine-dining restaurants. For me to receive the Michelin star is like a dream come true.

What sets your food apart from the other stalls in Singapore?

My food is cooked with love, just like home-cooked food. I use better quality ingredients and everything is hand-made from scratch. I start the preparation early in the morning before the sun is out.

How has your life changed since you won the award?

My life changed completely, many doors opened; I was exposed to different cultures, food and opportunities. Partnering with Tiger has brought me to places I’ve never dreamed of going, like Australia, New Zealand and New York. I was also presented with the opportunity to collaborate with other Michelin Chefs around the world. It is an honour to have worked with them.

Another impact on my lifestyle is that I have more time for my family and loved ones; I have truly been blessed and it has been an amazing experience.

How has your partnership with Hersing Culinary allowed you to share your food with a larger audience?

With their support I was able to create Hawker Chan, a quick-service restaurant. Currently we have three restaurants in Singapore. We also have three overseas outlets – Bangkok, Thailand; Taipei, Taiwan and Jakarta, Indonesia.

I’m really happy with my decision to have chosen Hersing Culinary as my partner; it is with their expertise that Hawker Chan is able to expand internationally so that people from different countries have the opportunity to sample Singapore’s hawker food fare.

Has the star brought more respect and attention to the hawker community as a whole?

No doubt, the Michelin star has given more hope and aspiration for the young and old entrepreneurs. The long hours and hard work that hawkers have toiled over the years have gained recognition and respected. I see more young adults taking up hawkering as a profession and it moves me to see them continuing the tradition.

How have you enjoyed the Tiger Street Eats events so far?

It has been an amazing experience. It was surreal to have collaborated with other Michelin Chefs in the past Tiger Street eat events, creating dishes together and going to countries I never expect to set foot on. I would like to thank Tiger again, for the unforgettable experience and opportunity.

What can the people of Dublin look forward to?

They can look forward to a taste of Singapore and I hope that they will enjoy my signature Soya Sauce Chicken dish!