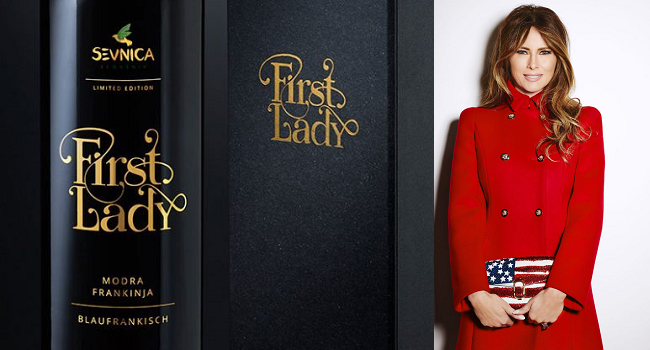 Slovenian producers have joined efforts to launch a wine inspired in Melania Trump, the Slovenian-born FLOTUS that unsurprisingly has become a national phenomenon in the Eastern European nation. Numerous producers have launched Melania themed merchandise including Melanija cake, honey and of course, a Melania Trump Wine.

Named First Lady, the bottle is a blend of Blaufränkisch grapes, known locally as Modra Franking, sourced from the vineyards of four different winemakers in Sevnica, the smallest wine region in the country and in which Melania grew up.

The first 300 bottles of the wine, priced at €27.90 (double the amount of bottles of the same quality), sold out in three days, and were available in the gift shop of the 12th century Sevnica Castle. Rok Petančič, castle steward, told Decanter.com that some people advise him to sell it for €500, however, he’s happy with current sales.

The wine, a light red, is seen by the winemakers as a great opportunity to promote their region as well as the variety. Blaufränkisch is a dark-skinned grape seen in countries such as Austria, Hungary, Germany, Bulgaria and of course, Slovenia. Fruity and lightly spiced, it makes delicate red wines often aged in moderation.

So, is this Melania Trump Wine a clever way for a small region to get some buzz going or a cheeky use of a public figure? Let us know what you think!