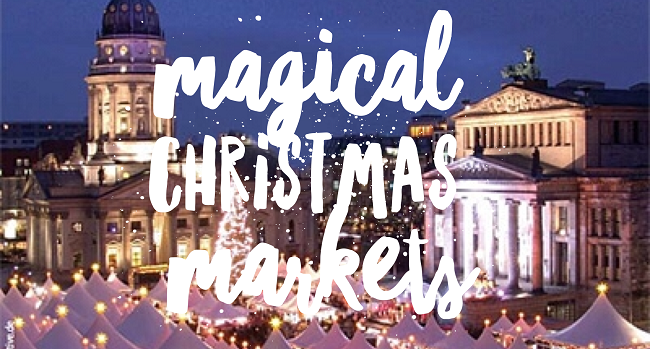 Halloween is dead and gone and our sights are firmly set on the arrival of the festive season, winter is upon us and some of us couldn’t be happier! In recent years it seems to set in that little bit earlier and while I’m not suggesting you don your Buddy the Elf costume or erect a tree in November, a little forward planning is needed for what is in my opinion the most wonderful part of the season – Christmas Markets.

Gloves clutching Gluwein, red noses unceremoniously diving into mounds of waffles smothered in Nutella and a carte blanche to set aside the idea of a defined meal time to graze all day long is my idea of heaven. There is definitely something to be said for packing your winter thermals and hopping on a plane to give the ritual due attention in snowy European destinations if you can manage it. Luckily the European model is catching on here with continental-style markets popping up all over Ireland this month too so if a trip isn’t on the cards you can still revel in festive foodie fun at home.

For dedicated food lovers, it is not enough to mark the festive season by keeping a candlelit vigil beside the Christmas biscuit tin – go on, clear your diary and pencil one of these fantastic Christmas Markets into your to do list for this month. After all, it is never too early to indulge! Without hopping on a flight, Belfast Continental Christmas Market is just an hour and a half from Dublin but genuinely feels like a world away. Set in the shadow of the stunning City Hall, chalets and cabins wait to be explored and the beer tent is cosy enough to warm you up in between deliberating over what to gorge on next.

You can also pick up some delicious artisan treats to take home with you and with Belfast having a massive food moment right now, you will want to fill the car with goodies. My personal favourite find here – Melting Pot Rum and Raisin fudge made by Belfast sisters Jenny, Catherine and Dorothy – Christmas captured in fudge form. Situated in beautiful Eyre Square, The Galway Christmas Market delivers the city’s year round feel good vibe with bells on. With a music stage hosting carolers and Christmas choirs and the addition of an ‘Enchanted Garden’ this year, you need no excuse to head West. Galway’s cobbled streets will be alive with festive cheer and importantly, fantastic beer at the German Bierkeller and you can even hop on the Santa Express train to explore the city.

The Galway Christmas Market will be open 7 days a week and trading hours are 12noon – 8pm Mon – Wed and 10am – 10pm Thurs – Sun. Dates for the market are to be confirmed, but it is likely to open its doors on November 20th until December 20th. While the German capital is home to many amazing Christmas Markets, it is difficult to fit them all into one trip, believe me, I tried. Spend less time on the U-Bahn and more time inhaling Bratwurst by going straight to the best – Weinachtszauber at the beautiful Gendarmenmarkt. Most markets in Germany are free to enter, but the super steep €1 admission fee is more than worth it for the magnificent setting – the square is situated between classic buildings The Deutsche Dom, the Konzerthaus and the Franzozische Friedrichstadtkirch, which light up at night to provide a magical festive glow.

You can sample every German delicacy from Berlin’s famous Currywurst to more traditionally festive Lebkuchen here while imbibing a toasty cup of Gluwein – so make sure you come hungry. Open from November 21st to December 31st. Famous for being the oldest Christmas Market in France, established in 1570,  Strasbourg Christkindelsmarkt is also one of the largest in Europe, with 12 different ‘villages’ to explore across the city. In the heart of Alsace, expect far more on the wine front than vin chaud here, as well as French gastronomic delights of the finest patés, foie gras and of course crépes in the shadow of a magnificent 550ft Christmas tree.

Strasbourg Christkindelsmarkt will be waiting for your arrival, along with 2 million other visitors, from November 25th, twinkling all the way up until December 31st. For me, half of the wonder and awe of a European Christmas market is down to the magnificent backdrop which often surrounds them. While Goslar may not be as well known as other German cities, it is a feast for the eyes as well as the belly.

The Old Town is a UNESCO World Cultural Heritage site at the foot of the North Harz Mountains, a Christmas card setting for a magical marketplace. Set in a medieval snow-covered square with 36 fairy-light dotted fir trees, Goslar is a truly authentic Christmas market experience you will never forget. What could be better than eating crispy Kartoffelpuffer, a German potato rosti of sorts, topped with apple sauce and a dash of nutmeg in this dream destination? Austria’s Capital Vienna is a fantastic place to jet to for culture at any time of year and is renowned for its Christmas markets. But if it just doesn’t feel festive enough without the crunch of snow beneath your feet, the mountain escape of Innsbruck is the Christmas market destination of your dreams.

While there are six different markets dotted across this picturesque city, it doesn’t get any more scenic than the Altstadt or Golden Roof Market which is over-looked by the snow capped Tyrolean Mountains. A Christmas bazaar with a unique Alpine flavour, treat yourself to marzipankartoffel (delicious almond treats shaped like potatoes) and roasted chestnuts on an open fire to warm up.

Kicking off early on the 15th of November, the ‘Golden Roof’ is open until 23rd December. The most beautiful market in the Swiss Alps, Montreux beats out competition from Basel and Lausanne for Christmas market glory due to its fairytale lakeside setting beside Lake Leman. Of course, the Swiss are famous for their cheese, so expect Raclette, a Swiss delicacy where a round of cheese of the same name is heated whole. The melted gooey cheese is then scraped onto anything from potatoes to sausage to cornichons. This is basically fondue made portable i.e Christmas Market friendly and a trip to Switzerland is worth it for this dish alone!

Montreux will be welcoming market goers from November 24th to Christmas Eve.

As the birthplace of the Christmas Market, Germany was bound to feature heavily on any round up and for me it is the Saxon delicacies of Dresden that earn it a place on the list. Dresden is the birthplace of my most recent favourite Christmas treat, Stollen, a.k.a marzipan, festively spiced dried fruit and almonds all wrapped up in an enriched dough, brushed with rum and dusted with a blanket of icing sugar.

Striezel is actually another name for Stollen and the Striezelmarkt takes this loaf so seriously that there is a ceremonial Stollen procession held to open the festival, as well as a theatrical slicing of a giant striezel. A baked good so irresistible it merits its own parade is definitely worth travelling for!

Get your Stollen fix from 24th November to 24th December. If you can pull yourself away from nibbling on Pražská Šunka – ‘Prague Ham’ which is smoked and roasted over an open flame – you might sing a few bars of Good King Wensceslas in the square named after the Bohemian Royal. The Czech Capital has market delights all of its own, so it is not just another market trying to masquerade as German. Try Trdelnik, a cinnamon and sugar rolled dough spiral cooked on a wooden pole or Medovina, a honeyed warm wine. Do not leave without sampling what has been described as Christmas in a glass, Becherovka, a Czech cinnamon spiced liquer made from a secret blend of herbs.

Visit the Christmas market at the home of the famed carol from December 3rd, which leaves you time to book your flights!