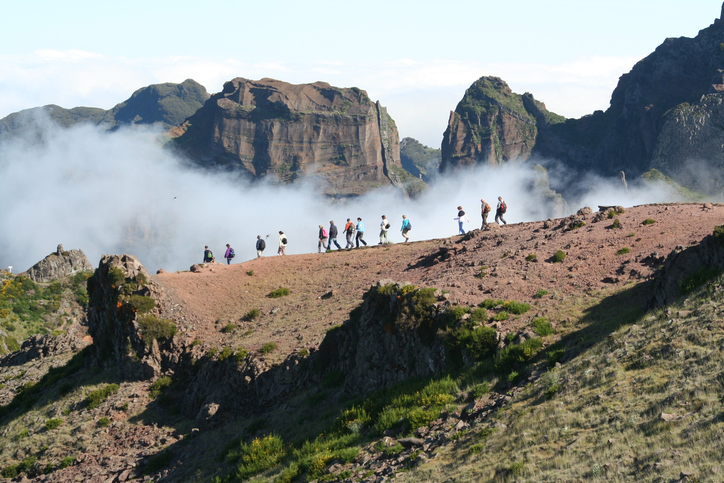 The hikers resemble tiny ants as they ascend the steep rocky ridge which, from where I’m standing, looks incredibly dangerous

Visible only because of their bright outdoor jackets, their minuscule size only emphasises the sheer scale of the magnificent cliffs they are climbing.

I had passed along the same route an hour before so I know the trail is in fact a safe and exhilarating walk, despite appearances.

We are at the most easterly edge of the island of Madeira where the land ends in spectacular fashion, plunging hundreds of feet into the sea.

It’s our last full day of a short break in this holiday paradise where most people come just to lie in the twelve-months-a-year sunshine or to relax in the picturesque towns and villages.

But we are on an activity holiday and Madeira is pulling out all the stops to attract more hikers, cyclists and canyoning enthusiasts to its shores.

Until now we have been walking and biking high inland, with low cloud and mist sometimes hiding much of the island’s famous rugged scenery.

But today on the coast, the sky has cleared and we are gazing at some of the most spectacular sea cliffs in Europe.

The island ends in a long strip of land stretching out into the sea, a bit like E.T.’s finger, with a stunning trail going to the very end of the headland.

From here the next stop is Africa 520kms away. And where the land narrows, the crashing waves can be seen far below on both left and right adding to the drama of this incredible walk.

This was one of the highlights of my four night action-packed break on the island.

We started off with a day’s cycling with mountain bike company Lokoloko, a fun-filled few hours on mostly downhill tracks through woods and along Madeira’s famous waterways, which are called levadas, aquaducts built centuries ago to carry water from the mountains and the wet northwest to the dry south coast.

Madeira Tourism is now promoting the levadas, some of them built in the 1500s, as great hiking trails through the island’s mountainous interior.

There are nearly 2,200 km of these waterways on the island so they offer countless opportunities for getting outdoors and viewing the stunning scenery up close.

The day began with a trip up to the Pico Arieiro radar station which stands at 1818m and has magnificent views of the surrounding peaks.

Fortunately, this was not on two wheels but in a four wheel drive as it’s the third highest mountain on the island.

Many people access it by car to hike on to the island’s tallest mountain, Pico Ruivo, along a well maintained path.

But we were on a biking adventure so after descending a little way, we picked up our bikes in a car park and set off along the Levada da Serra do Faial.

There’s a real adrenalin rush that goes with cycling along dirt paths but the trail was mostly wide and well maintained.

There was no danger of getting lost as we had a local guide who knew every inch of the 20km route which occasionally passed through remote villages and tiny country roads.

At times it seemed we had the mountain to ourselves and we came away unscathed and quietly proud that we had not fallen off or suffered any mishaps.

That night we headed into the old town in the capital Funchal for dinner and immediately fell in love with its narrow, cobbled streets and old-world charm.

We enjoyed a delicious seafood feast of local breads and olives, prawns in olive oil, various shellfish and a recommended main course, a black scabbard “espada” fillet with banana and passion fruit sauce, a local delicacy.

Then it was back for nightcaps in our hotel on the outskirts of town, the lovely and recently renovated four star Alto Lido right on the beach front.

The area is lined with bars and restaurants and is home to countless street traders selling everything from handbags and jewellery to sportswear.

Next day saw more action as we did a long hike along the Levada do Alecrim with the company Adventure Kingdom.

This was much more basic than the previous day – it would have been impossible on a bike – with the narrow trail overgrown in places and worn away in others. Occasionally you got a glimpse of a valley floor hundreds of feet below which meant treading very carefully.

At one point a companion stepped on what she thought was grass but was in fact algae sitting on top of the levada and she plunged down to her knees in water.

The levadas come in all shapes and sizes so it’s up to the visitor to choose the level of difficulty.

That night we had dinner in the atmospheric Chalet Vicente restaurant which was within walking distance of the hotel. I tried the pan fried calf’s liver while others went for prawns and calamari on a skewer with sautéed potatoes and spinach.

The next day saw our group split in two, with half choosing to go canyoning and abseiling down waterfalls while the others headed to the eastern end of the island to walk the sea cliffs mentioned above.

We shared our stories over a late lunch on our return in a restaurant not to be missed – at the bottom of a cliff accessible only by cable car.

The unique Fajã dos Padres dates back to colonial days when it used to be a summer residence of the Jesuits.

Today it is a lovely restaurant in a spectacular seafront setting at the foot of 300m cliffs where the cable car ride down is all part of the fun. We enjoyed a lovely fresh, whole grilled fish dish with potatoes and vegetables.

After an afternoon spent wandering around town we were in for another treat in the evening, another exceptional meal in the village of Paul do Mar, a 45 minute drive away on the western edge of Madeira.

Food does not get any fresher than at the laid back Maktub restaurant where they do just one dinner a night – whatever comes off the fishing boat.

We were there when the red snapper arrived and a little later we were tucking into a three course dinner for just €25 and with wine at €11 a bottle it was some night! There’s a real hippy vibe to the place and you can book a room for €40.

One of the most unexpected things about Madeira is its comprehensive road system.

In such a mountainous island 180 tunnels had to be built to allow the 260,000 population to get about with the longest stretching a mighty 3.1 km, a major feat of engineering.

It might seem an anomaly to be driving through tunnels when the scenery outside is so spectacular but that’s the price of being able to visit the whole island.

We travelled to the island courtesy of Madeira Tourism and TAP Air.

TAP flights to Madeira from Dublin cost from €82 one way. See: https://www.flytap.com/en-ie/