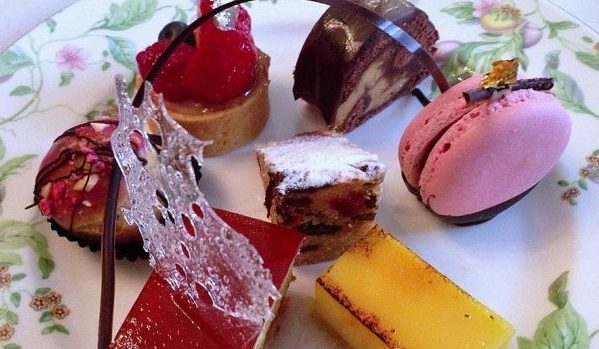 I love nothing more than sitting down to afternoon tea. It is, without doubt, one of the most pleasant ways of whiling away a couple of hours. Every now and again I like to find the time to relax in elegant surroundings and enjoy a leisurely cup of tea along with a variety of sweet and savoury treats. My daughter Emma shares this enthusiasm, so when I recently suggested visiting Dromoland Castle in County Clare to have afternoon tea there, she jumped at the opportunity to join me.

Dromoland Castle is an imposing Gothic building set in beautifully maintained estate grounds. Dating from 1651, the turreted castle was the ancestral home of the O’Briens of Thomond who were descendants of Brian Ború one of the High Kings of Ireland. These days the property is one of Ireland’s premier five-star hotels and over the years has played host to many famous guests including President Bill Clinton and Nelson Mandela.

Named after a kitchen maid who worked at the castle for many years, Mrs. White’s Afternoon Tea is served in both the Gallery Lounge and the Cocktail Bar. It is extremely popular so booking in advance is advised. Access to the both the lounge and bar is down a network of meandering corridors but our destination was well sign-posted so we easily found it. Blinking in wonder at the magnificent crystal chandeliers, we were led to our table in the Cocktail Bar. Outside the window we could see some visitors enjoying a ride around the spectacular grounds in an old-style pony and trap.

The afternoon tea consists of a selection of freshly made sandwiches, cream cakes, fruit tart and fresh pastries. Guests are also treated to a slice of the Dromoland fruit cake and warm fruit scones with clotted cream and preserves. Served on the prettiest of fine china plates, everything about the Dromoland afternoon tea screams luxurious elegance. 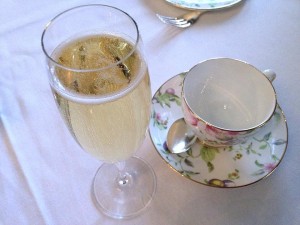 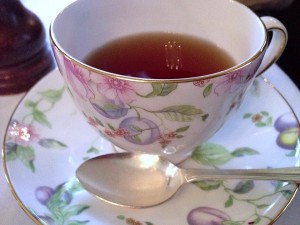 To kick off proceedings I decided to have a glass of Champagne while I considered my choice of tea. A good selection of loose leaf teas is available including the eponymous Dromoland House Blend. Although tempted by the exotic-sounding Wild Cherry Ceylon, I eventually settled on the Tarry Lapsang from the Fujian province of China. Famous for its smoky aroma Lapsang Souchong has a lovely deep golden colour. This was a very good example and with its almost cool smoky flavour was wonderfully refreshing. I was delighted with my choice. Whilst I sipped on my tea, Emma lost herself in a decadent cup of Hot Chocolate which she proceeded to pile high with the mini-marshmallows served alongside it.

I love the moment during an afternoon tea when the cake-stand arrives packed full of delicious goodies and we were not disappointed with what we were served in Dromoland which was packed full an astonishing array of sandwiches, cakes, pastries and scones. 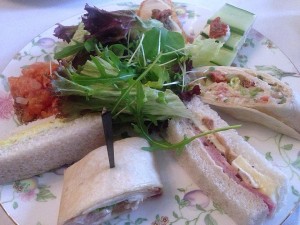 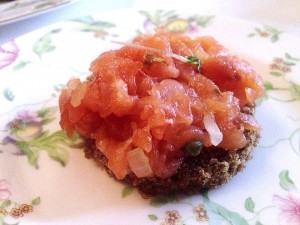 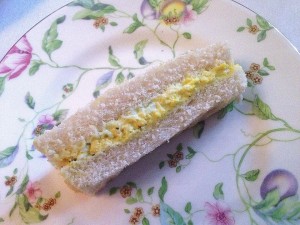 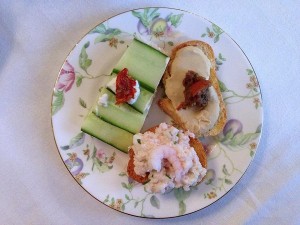 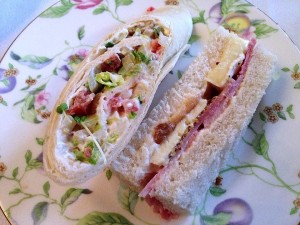 The sandwiches were amongst the finest I’ve ever had and were visually very appealing. Too often sandwiches can be hit-and-miss with far more effort and attention given to the cakes and pastries that are served as part of an afternoon tea. These showed creative flair and included a number of interesting fillings served on a good range of breads. Classics such as an Egg Mayonnaise on White Bread, and an open Cucumber & Cream Cheese sandwich were there but the selection also included one topped with Hummus and Black Olive Tapenade which was delicious. I particularly liked the Smoked Salmon sandwich which was served with generous chunks of the fish on a disc of brown soda bread. A Ham & Cheese sandwich was also delicious with its filling of baked ham, brie and chutney but my favourite was probably the Mixed Salad Sandwich Roll which had been well-seasoned and was incredibly flavoursome. 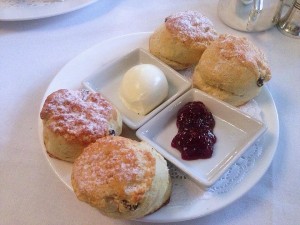 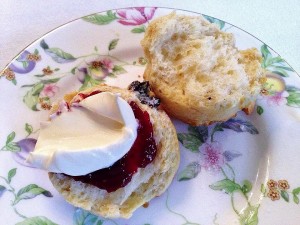 We then moved on to the Fruit Scones. I have eaten many scones during my lifetime and these were amongst the best that I have had. Served warm, they were light and fluffy with just the right amount of sweetness. Topped with a generous amount of Clotted Cream and Raspberry Jam, I savoured every single mouthful. My Granny was evangelical when it came to scones and would refuse to eat any that did not reach her exacting standards. She would have loved the scones in Dromoland for they were truly outstanding. 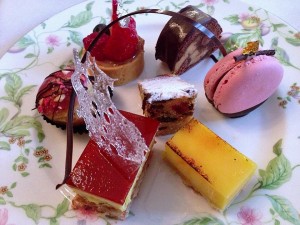 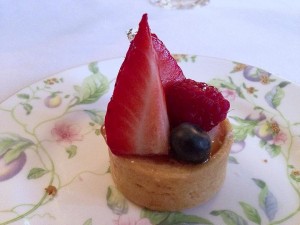 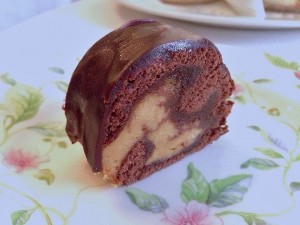 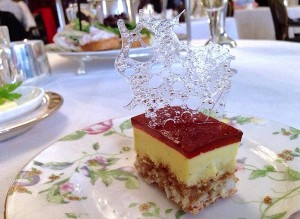 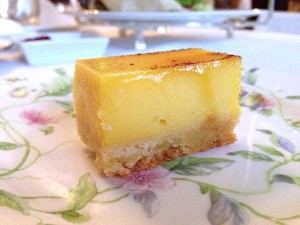 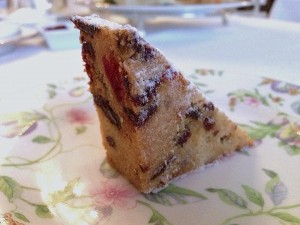 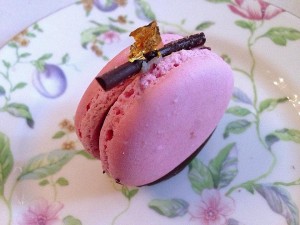 After a short break, during which time my tea was refreshed, we moved on to the final tier of the cake-stand. Playfully presented, the cakes and pastries were beautiful to look at and we couldn’t wait to try them. A bite-sized Fresh Fruit Tart with its crème pâtissière filling and topping of fresh berries was excellent and I thought that the Vanilla Cheesecake was wonderfully light and creamy. However, for me, the Lemon Tart was the stuff that dreams are made of. Lemon tarts are technically quite tricky to perfect but this one with its crisp shortcrust pastry base and lovely tangy lemon custard/curd filling was magnificent.

I was also impressed by the Dromoland Fruit Cake which was moist and packed full of dried fruit and had a tender crumb. We finished with a skillfully made Macaron with Chocolate Ganache.

We thoroughly enjoyed our afternoon tea in Dromoland Castle and both of us agreed that it had been a wonderful and relaxing experience. Service was friendly and extremely attentive throughout. I found the staff to be knowledgeable about the food and, in particular, the teas on offer.