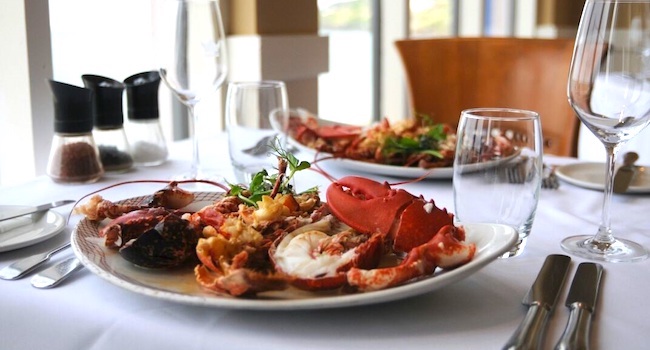 Since 1971, King Sitric has stood at the tip of Howth commanding unrivalled views across the bay from which so much of its menu is sourced. Local is the buzzword du jour and provenance is prime in today’s dining landscape, and as the Irish public wake up to the delights of our own seas, increasingly we are seeking out the very best Irish seafood with a backstory, if possible.

Long before a stringent and sustainable sourcing policy was a necessity, and in a business where up until recently frozen, imported seafood ticked the necessary boxes for restaurants, the McManus family was shining a spotlight on a treasure of the Irish coastline – lobster. “90% of our lobster comes from Balscadden Bay” Declan tells me, pointing out the window to the sparkling blue sea, “and the other 10% is from Lambay.” Paul McLoughlin and Ted Dickson are dedicated local lobster fisherman who pot exclusively for King Sitric, and have done so for almost 40 years. In fact, McLoughlin fishes in what is thought to be the last operational Currach on the east coast, and pulls in all pots by hand.

In a time when Irish seafood is being exported left right and centre, this relationship is worth its weight in gold. “The trucks keep the prices high and any fisherman can now export,” Declan tells me, regretfully. “If Irish people would just get their head around eating the whole thing, we’d be grand. Big prawns end up in Spain as they’ll suck the eyeball out of them and savour every part of it,” I hear, momentarily daydreaming about the crisp fried prawn heads I demolished in the Madrid sunshine and longing to have that same pleasure here. This reality is, undoubtedly, “bad for the Irish” and all the more reason why it is vital to support the people working to make it accessible at home, the likes of Paul and Ted, who dedicate themselves to their craft and play a huge part in King Sitric’s success. All of their fishermen are paid on the day, and can rely on the business they get from King Sitric, making it an enduring and mutually beneficial relationship.

The next piece of the puzzle is ensuring their catch is well looked after once it comes in from the bay. King Sitric is home to the oldest lobster tank in Ireland, ticking away since 1971. In that time, it has undergone many upgrades and now boasts a UV filter and protein skimmer(which does all the dirty work) and maintains a 6 or 7 degree winter water temperature to ensure its clawed inhabitants hibernate peacefully within. Having a state of the art lobster tank isn’t just for bragging purposes, as Declan explains that the sophisticated technology behind it has ensured that they have gone the entire year without a loss. “It is a gamble, as one infected lobster can wipe out the entire tank” and this advanced system in turn helps keep the prices fair, as the savings go directly to the customer.

While prices change every three weeks, peaking at Christmas -“the Spanish eat lobster like we eat turkey, so we have to compete,” I am a little shell shocked to hear that in the height of summer, Declan expects to serve up whole grilled lobsters at a price in or around €23.

I think the biggest shock to people is that lobster is accessible here. They see lobster on the menu and think ‘Jesus I can’t be ordering that’ until they see our market price on the board. There is an Irish misconception that lobster is luxury and it is the most expensive thing in the world, but it doesn’t have to be, if you do enough of it and you know what you’re doing.

As specialists in the art of lobster, this competitive pricing is a direct result of dedication to sourcing well and honing their craft over the years. This allows them to serve up some of the most keenly priced lobster in Dublin, with roughly 30kg making it to the plate per day – 60 half kilo beauties duly devoured. There is something wonderfully unique happening in King Sitric, plucking the prized crustacean from mere metres away to serving them every which way your heart could desire – 9 variations to be precise. The philosophy behind it, however, is to keep shellfish simple and “not to be fluting around with it” and serving it for what it is.

“Our Lobster Lawyer, for example, has four simple, quality ingredients – Irish lobster, Irish whiskey, Dijon mustard and cream,” he tells me of the retro classic which was so named as only lawyers traditionally could afford it. At King Sitric, you needn’t brandish your law degrees or don a gown to devour such luxurious dishes, or take your pick of Thermidor, lobster salad or comforting Mornay. Essentially, what King Sitric is offering, says Declan, is “lobster with no shortcuts. That is what we try to do with everything, we hand peel our prawns, hand pick the crabmeat.” The team here take things back to basics, from the catch to the preparation, to allow guests to soak up that most quintessential of summer day delights.

Summer is lobster and ice cream in Howth. They won’t it all year and then a sunny day they’re down ploughing through lobster!

The only thing better than lobster on a sunny day? Lobster with a crisp and cold glass of white wine, surely. “Our house white is a lemony Pinot Blanc from Alsace, it has been the house white since my parents discovered it on a wine trip in 1981, simply because it pairs so beautifully with lobster,” he tells me, confirming that the king of the sea rules the roost in all aspects of the King Sitric experience, and always has. “I was 7 or 8 when I first changed the water on the tank, standing on a stool – they were my childhood pets!” Declan laughs as our chat comes to an end, the dining room set for another full house and dozens of plates luscious lobster dishes. It is abundantly clear that lobster is king here, and it is in the McManus family blood.

King Sitric, it seems, ticks all the boxes – family run, committed to celebrating local Irish lobster and consistently good enough to keep punters flocking back year after year since 1971. I can imagine the sun shines on this neighbourhood gem, whatever the season. No arguments here, make mine a Lobster Lawyer.