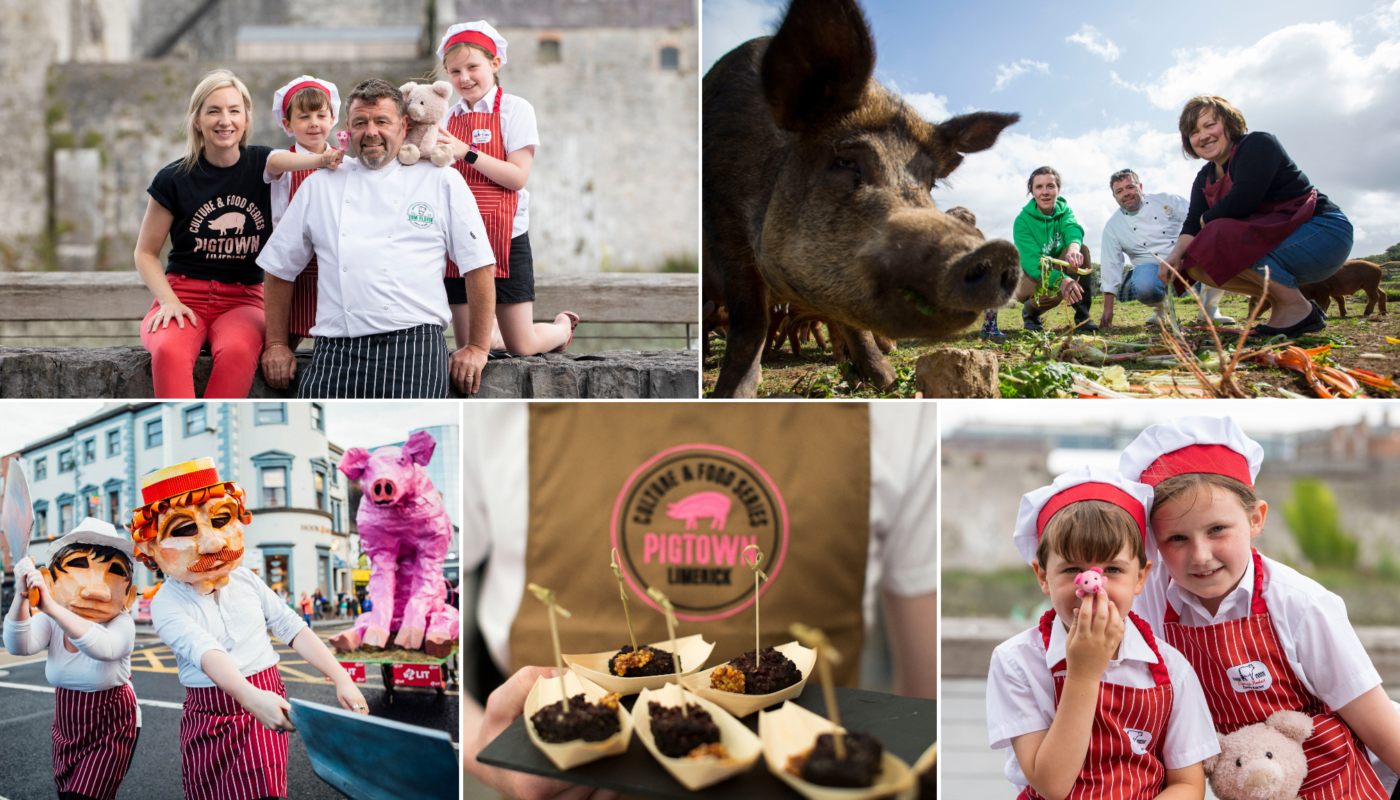 Limerick’s annual family-friendly Pigtown Festival returns for its sixth year on Saturday September 17th, with an entire series of specially curated events and immersive experiences celebrating the county’s food culture running until Saturday October 1st.
Inspired by the city’s famous historic bacon industry and the county’s deep-rooted food heritage, the Pigtown Culture & Food Series – developed by Limerick Food Group with the support of Limerick City & County Council – showcases the sheer quality that Limerick has to offer. This year, Pigtown Festival is also one of the festivals that has been selected for the Global Irish Festival Series initiative by Failte Ireland.
Over the course of three weekends, Pigtown Festival 2022 will offer up a smorgasbord of one-off events and exclusive experiences that will offer locals and visitors to the area a deep-dive into Limerick’s rich and diverse food culture. From Michelin star Pigtown dining experiences to cookery demos with top chefs in the famous Milk Market, historical talks and walks around the city, opportunities to ‘Meet The Makers’, and the return of the popular Pigtown Pig Parade – back for the first time since 2019 – there’s something to suit all tastes and ages.

Limerick Food Heritage Memorabilia:
For the entirety of the festival, Limerick Museum presents ‘Limerick Food Heritage Memorabilia’; a specially curated exhibition at St Mary’s Cathedral featuring historic objects of interest relating to Limerick food culture. Admission to the exhibition, which is open Mondays to Saturdays, from 11am to 4pm, is free.

Pigtown Cookery Demos At The Milk Market:
On the opening morning (September 17th) of Pigtown 2022, the upstairs area of the Milk Market will play host to the first in a series of Pigtown Cookery Demos (starting at 10.30am), hosted by 1826 Adare’s Head Chef & Owner, Wade Murphy. There will also be demos hosted at the same time and location on Saturday September 24th and Saturday October 1st, featuring a host of guest chefs including Alex Timms of No. 1 Pery Square Hotel & Spa, Caterer, George Casey, and more. All demos are free to attend, although it should be noted that capacity is limited so you are encouraged to arrive early to avoid disappointment.

Pigtown Walking Tour:
The following day (Sunday September 18th at 3pm), local Historian, Dr. Paul O’Brien will lead a Pigtown walking tour of the city entitled ‘What’s on the Menu? Limerick Restaurants 1860-1960’ exploring the city’s deep-rooted food heritage. The meeting point for the tour, which is free to join and will take around 1-2 hours to complete, is outside the main entrance to Brown Thomas on O’Connell Street.

Michelin-starred Pigtown Dining Experience:
That evening, and for one night only, Adare Manor’s Michelin-starred The Oak Room restaurant will provide the setting for a very unique Pigtown Dinner Experience. Executive Head Chef, Mike Tweedie, has designed a special set menu, priced at €140 per person (beverages not included) that will proudly showcase an array of his favourite Limerick-based suppliers and artisan food producers in a meal to remember. Reservations for the Dinner on Sunday 18th September, which starts at 6pm, can be made online at www.adaremanor.com, or by calling the Adare Manor Dining Team on (061) 605246.

Culture Night Pigtown Pig Parade:
Friday September 23rd sees the much-anticipated return of the Culture Night Pigtown Pig Parade (6pm to 7pm). Gathering on Bedford Row in the city centre, festival goers of all ages are encouraged to come along and enjoy face-painting, fun, and much more, before joining the parade as it winds its way through the streets of Limerick down to the Milk Market.
Culture Night At The Milk Market:
On arrival there, the Culture Night Pigtown Gathering and Parade Afterparty will be in full swing between 5pm and 8pm. Family fun at the Milk Market will include a mobile petting farm, a pig mask-making workshop, hot food vendors, craft stalls, live music, and plenty more to get everyone in a festival mood. The Mask Making Workshop will be hosted by Lumen Street Theatre and run from 5.30pm to 7.30pm. It is free to attend and suitable for children aged 10-13 years, with younger participants will need a parent to assist. Places at the workshop are limited to a maximum of 12 children and will operate on a first- come-first-served basis.

Pig’n’Poke On Nicholas Street In Association With Treaty City Brewery:
The Culture Night celebrations on Friday September 23rd will also spread across Limerick to Nicholas Street. Dan Sykes from The Green Room at Springfield Castle joins fellow
Chef, Keith Pigott, and the Treaty City Brewery’s Founder, Stephen Cunneen, for a Pig’n’Poke event (5pm to 9pm) in association with the brewery to mark Culture Night in the Medieval Quarter on King’s Island. Dan Sykes’ Beef Flank Tacos and Keith Pigott’s Slow-Cooked Pork Butt in Local Brioche, as well as Hawaiian Poké bowls for vegans, vegetarians or pescatarians, will be on offer alongside Steve’s exclusive brew, the ‘Pigtown Pilsner 2.0’ – a bohemian pilsner brewed in Limerick especially for the occasion. Admission to the Pig’n’Poke event on Nicholas Street is free.

Meet The Maker: Caroline Rigney:
On Saturday September 24th (3pm to 5pm), leading Limerick Chef & Food Consultant, Tom Flavin, will host a ‘Meet The Maker’ session in collaboration with one of the county’s top artisan food producers, Caroline Rigney. Attendees will be given a guided tour of Caroline’s rare breed pig farm in picturesque Curraghchase, Co. Limerick, followed by a sourdough baking and pulled pork cookery demo with Tom Flavin. Those attending will get the opportunity to sample some locally-inspired beverages and cocktails including ‘A Taste of Chateau Ardagh’ (limited edition wine made in West Limerick), Homemade Rhubarb Wine (traditional recipe), and Elderflower Gin and Attyflin Rosette Apple Cocktails. These will be served alongside freshly made hot snacks created using locally grown and foraged produce. The menu for the afternoon is set to include Pulled Pork & Beetroot Sliders, Pork Belly & Green Tomato Chutney on Freshly Baked Sourdough, and Attyflin Apple Crumble Pots with Fresh Duck Egg Custard and Rigney’s Granola. The cost of this ‘Meet The Maker’ session is €35.00 per person and tickets can be booked online via Eventbrite.

One-off Pigtown Dinners:
The festival will also feature a selection of the city and county’s best eateries. The likes of Tuscany Bistro in Castletroy (Tuesday September 27th), Sash Restaurant @ No. 1 Pery Square Hotel & Spa (Wednesday September 28th), and renowned Ballingarry-based restaurant, The Mustard Seed (Thursday September 29th), will all be putting on one-off Pigtown Dinners. Tuscany Bistro presents ‘The Italian Supperclub: The Pigtown Edition’. This event will consist of a four-course set menu, with each Pigtown-inspired dish paired with a delicious cocktail. The evening will also include a cooking demo with one of Tuscany’s newest chefs and a cocktail making demonstration hosted by Dingle Gin. Guests will also receive an accompanying recipe book so that they can recreate their favourite food and drink from the evening at home. Please note that this event is not suitable for vegetarians.
The cost of the ‘Italian Supperclub: The Pigtown Edition’ is €65.00 per person + €4.55 booking fee and can be purchased online at www.eventmaster.ie

The Pigtown Dinner at Sash (No. 1 Pery Square Hotel & Spa) on Wednesday September 28th (tables available from 6pm) comprises a hyper-local set three-course menu that includes a welcome cocktail on arrival. Dishes on the night will include a starter of Ballyhoura Mushroom Gnocchi, Smoked New Leaf Urban Farm Leeks, and a Hakurei Turnip Dashi. For mains, guests will enjoy Caroline Rigney’s Pork Belly, Candied Pork Cheek, Black Pudding Purée, New Leaf Urban Farm Carrots, and a Treaty City Brewery Pale Ale Jus. And, the dinner will finish with a Temple Roe Farm Raw Milk & Castleconnell Wild Honey Parfait, Attyflin Apple & Lavender Gel, and Honeycomb. The cost of the Pigtown Dinner at Sash is priced at €49.00 per person. An optional wine pairing is available for an additional €29.00 per person. Bookings can be made by emailing info@oneperysquare.com, or calling (061) 402 402.

The Mustard Seed is offering a four-course menu priced at €55.00 per person as well as a special overnight rate of €69.00 per person sharing including breakfast, exclusively for diners wishing to stay the night and enjoy an oasis of countryside bliss. Bookings should be made directly with The Mustard Seed either online at
www.mustardseed.ie, or by calling (069) 68508.

Meet The Maker: Treaty City Brewery:
The second in the series of ‘Meet The Maker’ sessions takes place on Thursday September 29th (7pm to 9pm) at Treaty City Brewery on Nicholas Street in the Medieval Quarter, with Chef Keith Pigott on the theme of ‘Beer as an ingredient… Steve talks beer, Keith cooks beer.’ The brewery’s Founder, Stephen Cunneen, will share his knowledge on all things beer while local award-winning chef, Keith Pigott, showcases his produce in a range of delicious beer-centric culinary creations. He’ll be demoing crowd-pleasing dishes like Harris Pale Ale Barley & Beef Risotto, Invasion IPA Rarebit on Novak’s Sourdough, Rigney’s Free Range Pork Sausage Roll with Outcast Mustard and Smoked Ketchup, and 70% Dark Chocolate & Sarsfield Stout Cake. The cost of attending the ‘Meet The Maker’ session at Treaty City Brewery is €35 per person, with every attendee receiving samples of each beer and dish along with a copy of all of the recipes to take home. Tickets can be booked online via
www.treatycitybrewery.ie
Commenting on what visitors to the festival can expect, Pigtown’s Olivia O’Sullivan said: “We are delighted to have Pigtown back for its sixth year. This year, we have reinstated events that could not happen during the pandemic so that is particularly exciting for us as organisers. There has been great support for the festival again in Limerick from chefs, restaurants, and cultural organisations, all enthusiastic to get involved and celebrate our food culture and rich food heritage.” “We are part of the Global Irish Festival Series 2022 this year, and are looking forward to offering visitors to Limerick a multitude of events to choose from. From chef demonstrations in the Milk Market, and street food on King’s Island, to Michelin star dining at Adare Manor, and cultural walks and talks, as well as Meet the Maker collaborations bringing chefs to a farm and a brewery. Plus Pigtown-themed dinners in many restaurants, and lots of family fun topped off with the return of our Pigtown Parade through the city streets on Culture Night.”

The Pigtown Festival 2022 runs from Saturday September 17th to Saturday October 1st. The full schedule of confirmed events and experiences can be found online at www.pigtown.ie.

About Pigtown Festival:
Developed by Limerick Food Group and supported by Limerick City & County Council, the series focuses on Limerick’s unique heritage as a way to showcase the great food available locally, building on Limerick’s deep-rooted food heritage. Each year since its inception, the festival also holds events such as cookery demonstrations in Limerick’s famous Milk Market led by a host of guest chefs and historical talks and walks, recounting the time when Limerick’s bacon factories fed Ireland and exported as far away as Russia. With four bacon factories operating at the heart of the city, the pig played a vital role in Limerick’s economic and social life. O’Mara’s, Matterson’s, Denny’s and Shaw’s (later Clover meats) built an international reputation for Limerick ham and bacon and provided employment for thousands of families linking the city and the surrounding county in the production of bacon products. Limerick’s bacon industry became almost like a family business, as many generations of families worked in these factories that were dotted around Limerick. Throughout the county, many farms supplied pigs to the factories so the impact of ‘Pigtown’ was far-reaching and sustained families throughout the region.